Ukraine is going in the wrong direction / bne IntelliNews
By Ben Aris in Berlin May 23, 2018

The centre for insights in survey research, a pollster that is part funded by the US Agency or International Development (USAID), just published an extensive survey on attitudes in Ukraine and it makes for pretty grim dreading.

To summarise the main results in broad brush strokes, the government of Ukraine has failed to fulfil the promise of the “Revolution of Dignity,” it has lost the youth who wont vote and see little future in their own country, while their parents retain very mixed feelings about what their relations with Russia should be or membership of Nato.

With presidential election slated for next year President Petro Poroshenko is in trouble and will have his work cut out if either he or his eponymous parliamentary fraction are going to retain power. However, the poor showing of the other parties suggests that Ukrainians don't like any of their leaders and in general feel the country has lost its way.

That will be a problem for Ukraine’s western allies that have repeatedly backed individuals rather than the process as part of a more general policy of wooing Ukraine away from Russia’s orbit of influence. It began with linking Ukraine’s Association Agreement to the release of opposition leader, former Prime Minister and head of Batkivshchyna (Fatherland) party Yulia Tymoshenko, who had been jailed by former president Viktor Yanukovych. Then Washington changed tack and backed Yanukovych when it became clear he was thinking of joining Russia’s Customs Union in 2013. Now it has put all its eggs in Poroshenko’s basket despite the current president’s clear hostility to introducing some key reforms. Only this week the International Monetary Fund (IMF) representative in Kyiv made it clear that more funding would only be made available if Kyiv makes progress on hiking domestic gas tariffs, ending the moratorium on land sales and setting up a anti-corruption court (ACC) – none of which are likely to happen; at least before the elections.

Ukraine’s economy collapsed after the Euromaidan Revolution in 2014 and the economy contracted by 15% in a year. Since then it has begun to recover, but rather than the bounce back and inbound flood of investment many were hoping for the growth has been anaemic and incomes in Ukraine remain the lowest in the former Soviet space, lower even than such basket cases as Azerbaijan and Belarus.

The upshot is 71% of the population think the country is going in the wrong direction – a result that have remains more of less unchanged throughout the post revolutionary period. And those attitudes is pretty evenly distributed across the country and amongst all the age groups. 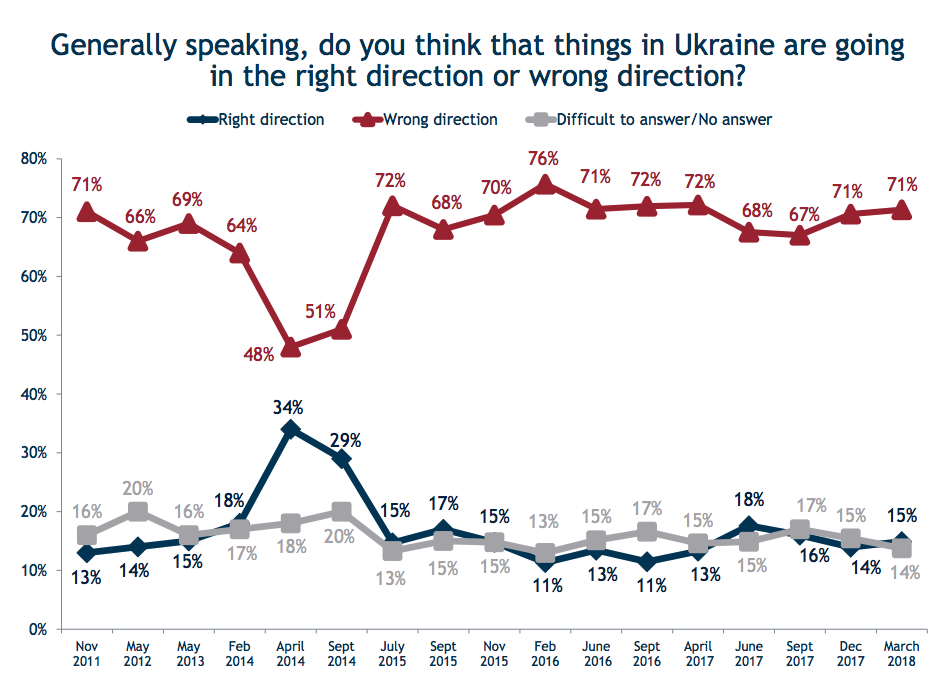 As for the changes in the last six months, less respondents thought the economic situation has gotten worse (69%) but that was only because the share that thought it was as bad as last year has grown to 20% from 11% immediately following the revolution and economic collapse.

The distress the people are feeling will be expressed at the polls. Some 63% of the respondents said they would definitely or probably vote in the parliamentary elections scheduled for October 2019.

Currently Tymoshenko’s Batkivshchyna party is leading the polls with 9% of total possible voters followed by the Opposition bloc (the rump of Yanukovych’s former Party of Regions ruling party) with 5% that ties with Poroshenko’s party for second place. 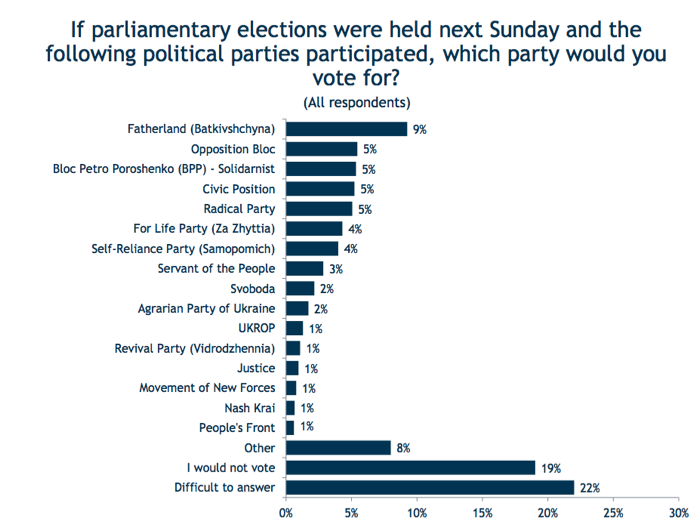 Ukraine has a mixed system where 50% of seats are distributed under party lists with a 5% election threshold and 50% through first-past-the-post in single-member constituencies. Counting out the “wont votes” from the poll numbers and seven parties should enter parliament but stepping back and it is clear that none of the parties have a clear lead over the others which will make it hard to hammer out any definitive policy in the new Rada. 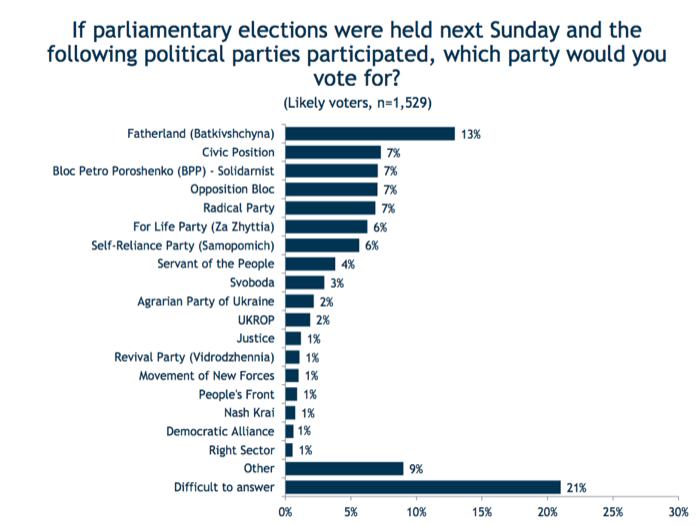 Poroshenko’s own disapproval rating has doubled over the last four years up from 27% “strongly disapproving” of the president to 50% now. If you include the “somewhat disapprove” then full 81% of the population don't like the actions of their president. 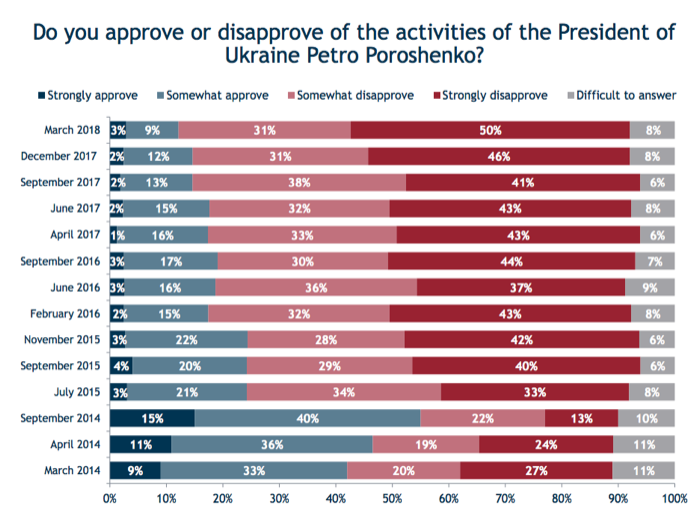 A lot of the disappointment is rooted in the government’s palpable failure to make any significant progress with reforms. When asked if respondents believe the judiciary is independent, they answered with a resounding “definitely not” (55%), which is the top complaint of Ukraine’s international donors at the moment. 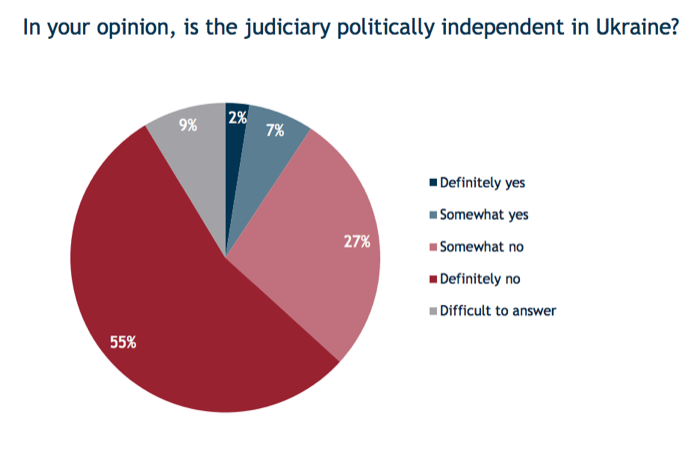 And the population seems as angry as the the IMF over this failure with 47% of respondents saying the west should impose the same style sanctions on the government and its politicians as have been placed on Russia by the west. Another 21% believe the IMF should cut Ukraine off from more money and 17% that donors in general should cut Ukraine off. Notably almost no respondents (4%) wanted to see the visa-free scheme rescinded, which is one of the very few feathers Poroshenko has in his cap.

Clearly the people are angry about the endemic corruption which the overwhelming majority believe puts money into the politicians pockets, impoverishes the population, undermines growth, demoralises society and leads to inequality.

As a consequence none of Ukraine’s political leaders enjoy much support. Notably even Tymoshenko who is the most likely to win the next parliamentary elections is a polarising figure with 48% of respondents holding a “very unfavourable” view of the former prime minister. Former prime minister Arseniy Yatsenyuk, another leading Maidan figure, is now the most unpopular of all the political leaders with 65% strongly disliking him. 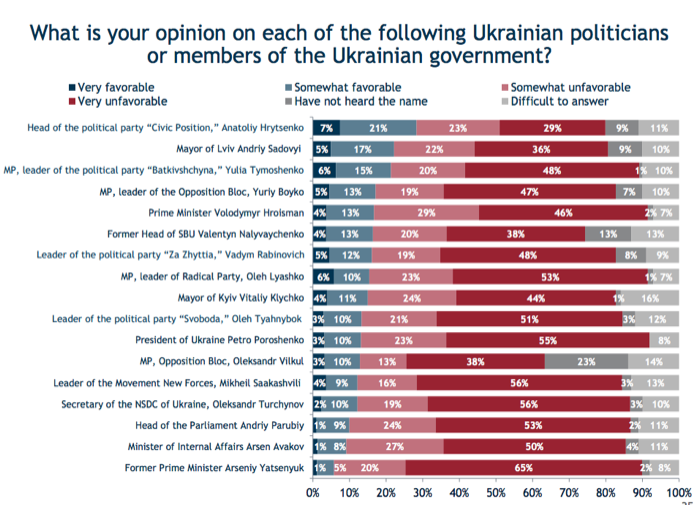 In general all Ukraine’s leaders have disapproval ratings in the 70s and 80s. There is not a single politician that can claim even the mild support of a third of the population.

Citizens are concerned by a number of issues, but the military conflict in the Donbas and corruption are the two that worry them most (41% and 40% respectively).

The next five issues are all quality of life problems caused by the economic collapse: inflation (27%), household utility prices (25%), unemployment (23%), and healthcare (20%). 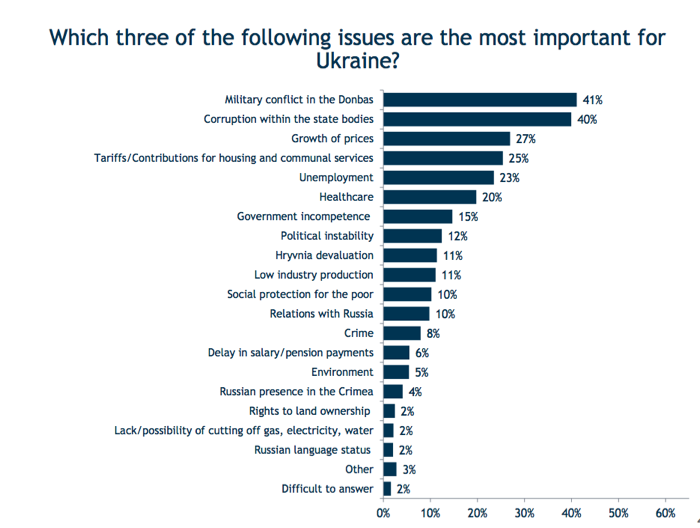 However, when asked which of the issues affect respondents personally inflation comes out on top with 42%, which is a trait common to the whole CIS. The years of hyperinflation in the 90s have clearly traumatised the populations of the east that saw their life savings wiped out by inflation in a few short years, which they continue to associate with crises.

More interestingly support for accession to the EU has been growing steadily from 36% in 2012 to 52% now – its highest level in six years. Over the same period support for joining the Russia-led Customs Union (now the Eurasia Economic Union (EEU)) has fallen from 43% to 18%.

With this one there is a wide disagreement in the country with the western Ukrainian pro-nationalist regions voting overwhelmingly for the EU (75%) while the more Russophile eastern regions being more pro-the Customs Union (34%) than the EU (28%).

Ukrainians remain a lot more ambivalent on Nato membership, although over the last four years their over all position has flipped from 34% for joining Nato and 43% again joining in March 2013, to 43% for and 33% against now. 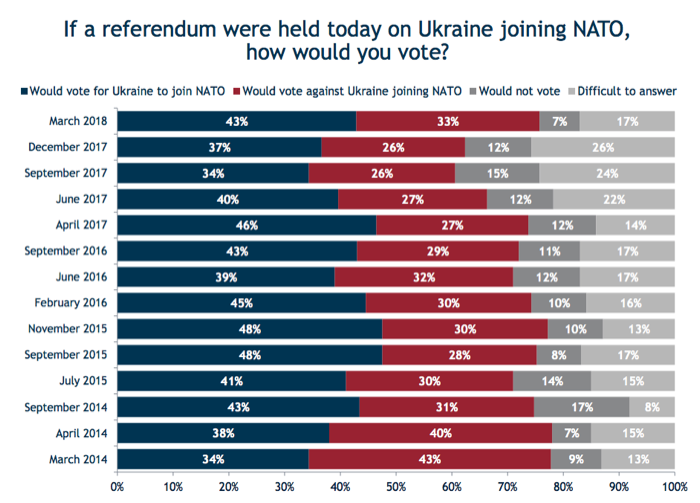 Again with Nato there is a strong regional divide with 66% of those in west for joining Nato and 55% of those in east against.

In general Russia has burn much of the good will it used to enjoy amongst Ukrainians, even amongst the Russophiles in the east as the damage the conflict has done to the country is too great and has gone on for too long. Half (49%) the population see relations with Russia as Cold or Very Cold, while Ukrainians regard relations with Poland (48%) as warm or very warm, EU (48%), Belarus (46%) and USA (40%). 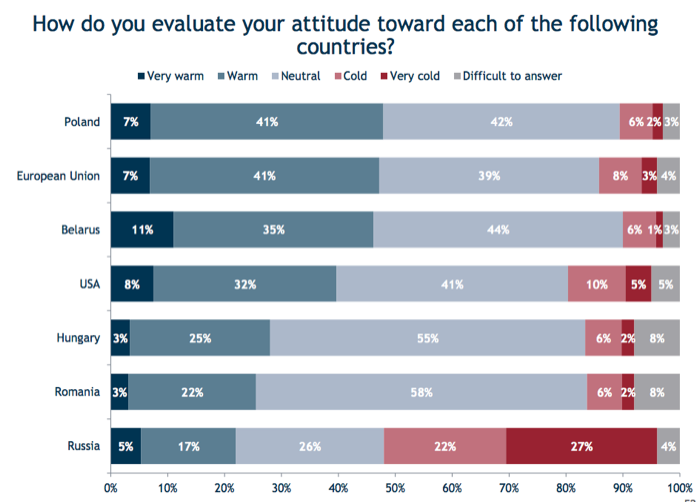 Interestingly although Ukrainians see their future as closer ties with the EU, culturally they still feel a lot closer to Russia. Almost half the respondents thought they were more like Russia when it came to intellectual life, morals, politics, standards of living and the social set up of their country. 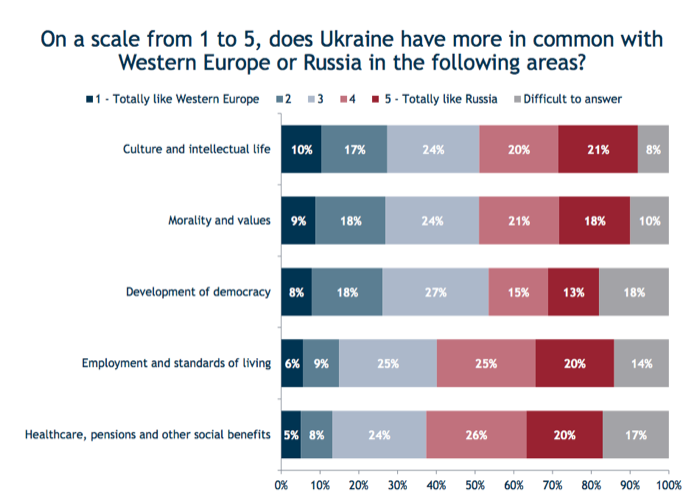 But the most depressing party of the survey was the pessimism that pervades on the future. Just over three quarters of the respondents (77%) thought that Ukraine holds no, or somewhat no, future for young people. 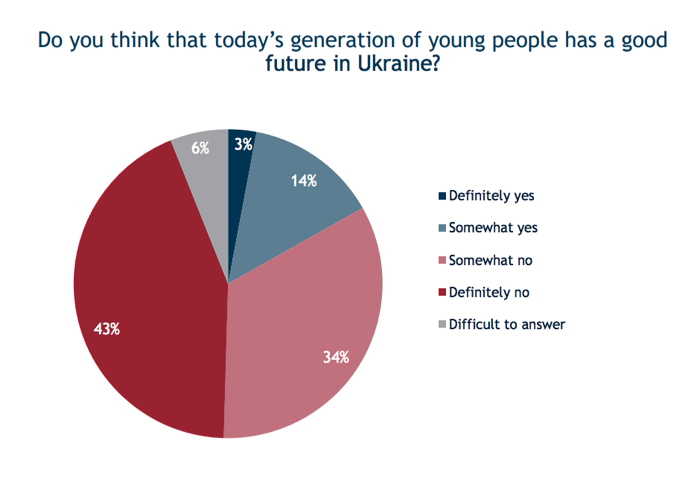 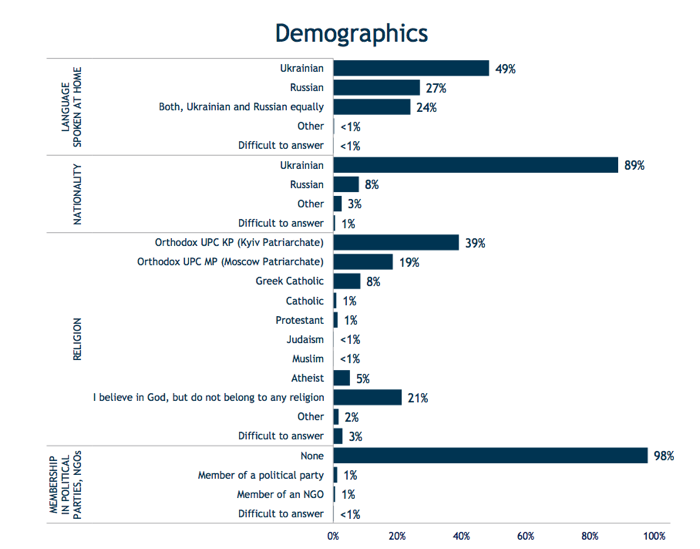 CEPR's action plan for Ukraine's wartime economy
1 hour ago
Missiles or sabotage: What caused the explosion at the Russian airbase in Crimea?
3 days ago
Population decline to take Emerging Europe back to the early 20th century
3 days ago
Czech government remains colour blind on green issues
3 days ago
Poland ups the ante in feud with Brussels over judiciary reforms
4 days ago