Impending Eurozone crisis to take its toll on CEE economies 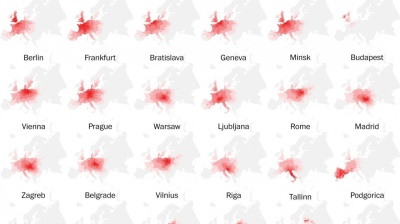 Europe is ill prepared for a economic crisis
By Clare Nuttall in Tirana November 8, 2018

The economies of Central and Southeast Europe are enjoying robust growth at present, considerably outstripping the slowing expansion in the Eurozone countries. However, there are numerous downside risks to the outlook, with the greatest being the possibility of a new Eurozone crisis, economists from the Vienna Institute for International Economic Studies (wiiw) said on November 7.

Growth in the CESEE-22, spanning the countries of Central, Eastern and Southeast Europe as well as Kazakhstan, is forecast at 2.8% this year, well above the 2.0% projected for the EU28. And while growth in the EU28 is expected to tail off to 1.9% and 1.8% in 2019 and 2020, with the Eurozone growing even more slowly, in the CESEE-22 after dipping to 2.2% next year it is expected to rebound back to 2.8% the following year. The growth rates in both the EU28 and the CESEE-22 are, however, below last year’s growth.

“Growth across most of the CESEE region remains robust, and this is likely to continue during the forecast period. However, growth in the region has passed its peak, and the pace of expansion for CESEE as a whole will trend downwards in 2019 and 2020,” the wiiw report said.

“We think the region is already at the peak of possible growth and from now on growth will slow down, although it remains quite healthy,” commented wiiw economist Olga Pindyuk.

Within the region the growth outlook for the EU member states of CEE and the Western Balkans is “generally good”, but the wider region’s two largest economies, Russia and Turkey, are expected to post the slowest growth over the next couple of years. Turkey is plunged into recession after this summer’s currency crisis, while wiiw economists attribute the sluggish growth in Russia to the lack of structural reforms.

The projections for the CESEE region come amid continued strong growth in the global economy but, wiiw economists pointed out in a webinar on November 7, much of this growth is in emerging regions such as Africa, Latin America and South Asia, which have relatively little trade with CESEE.

More relevant are the “less positive” prospects in the Eurozone, which, wiiw says, is a “key source of export demand, remittances and investment for CESEE”. Growth in Italy has ground to a halt, and while the Q3 figures for Germany are not yet out, a recent meeting of it economic advisory council – the so-called “five wise men” – have said German economic growth could drop to zero next year. On top of these both China and the US are set to see slower growth this year, which “presents certain headwinds for growth in our region”.

The other point stressed by wiiw is that the risks facing the region have increased considerably in recent months, and are now “both bigger and more on the negative side than has been the case for some time,” said wiiw economist Richard Grieveson.

“Now, we see with developments in Italy certainly potential for a new outbreak of the eurozone crisis,” Grieveson added.

Rome alarmed other EU nations with its budget announced in October that prioritised tax cuts and higher social spending, which Italian government politicians say should help the country boost its lethargic growth rate. However, Italy already has the world’s fourth largest debt load at over $2.6 trillion or around 131% of the country’s GDP, which is more than double the amount it is allowed under EU rules. There are now fears of an acceleration in the recent rise in Italy’s borrowing costs that could put the country at risk of default.

“We are sceptical that the required reforms needed to save the eurozone from another crisis will come, and if they don’t we think another crisis is pretty likely. This would be very bad news for our region because our region’s trade, investment, remittances are very dependent on the eurozone, and lot of [the region] is in the eurozone.”

Among the other risks to the region’s prosperity are the trade war that to some extent has already started between the US and China. This comes on top of stalling if not a slight reversal of globalisation seen over the last 10 years, and is bad news for the open economies of the CEE region in particular.

In addition, China has become such an important source of investment in the region, especially in the Western Balkans that lack other sources of finance for infrastructure projects, that “if the Chinese economy suffers because of US trade policy that is also very bad news for our region,” Grieveson told the webinar.

On a more positive note, wiiw says that overheating concerns — previously voiced particularly about Turkey and Romania — have subsided since the spring. “However, the tightness of labour markets, rising property prices and negative real interest rates are potential sources of risk,” the report adds.

Yet there are some positive aspects to the outlook. The CESEE region could benefit significantly if the current squeeze in labour markets especially in CEE force firms to invest into raising productivity.