Impact of Donbas blockage to be limited and temporary, says German Advisory Group 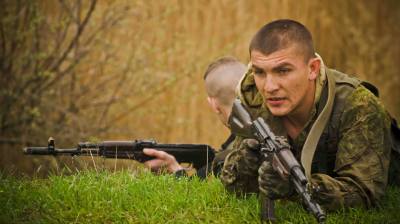 Ukrainian soldiers in the Donbas.
By bne IntelliNews August 21, 2017

Ukraine’s economy has been rocked by the economic blockade of the disputed Donbas region in the east of the country since March, but the German Advisory Group finds in a recent report that while the blockade is painful, it has done less damage than feared.

Ukrainian-owned businesses in the non-controlled area (NCA) in March were seized by the separatist Russian-backed authorities and in response Kyiv cut the region off from the rest of the country, imposing an economic blockade.

Donbas is home to much of Ukraine’s heavy industry, as well as steel, coal and power plants. All-in-all it accounted for 8.4% of GDP in 2013 and the blockage has shaved at least 1% of economic growth estimates for this year, according to the National Bank of Ukraine (NBU). However, that estimate was revised downwards by the Berlin-based German Advisory Group in a recent report. The group has been advising the government of Ukraine on economic policy issues since 1994. It is funded by the German Federal Ministry for Economic Affairs and Energy and implemented by the consulting firm Berlin Economics.

“The effect of the company seizures is estimated to take 0.7% off Ukraine’s GDP in 2017, as the seized companies no longer are a part of Ukraine’s GDP. The trade suspension is likely to result in a negative effect of 0.6% on GDP in 2017, as several value chains are disrupted,” the German Advisory Group said in the report. “However, reorganisation of production processes and substitution of inputs through imports and of sales through exports are possible. The magnitude of the effect in 2017 hence depends much on the speed of adjustment and is likely to be temporary. Grave disruptions such as electricity shortages due to a lack of anthracite coal or strong decreases of steel production do not appear realistic.”

“In total, the economic effects of seizures and trade suspension on Ukraine are still significant and will noticeably depress GDP growth for 2017. However, in comparison with the effects experienced in previous years, the magnitude will be limited,” the group concluded. “Rumours about possible energy shortages or a critical hit to the metal sector appear unfounded according to our analysis.”

The biggest disruption to internal trade was the delivery of coal from the conflict zone to the rest of the country. One of the most immediate impacts of the blockade has been to cut Ukraine’s utilities off from their only supply of anthracite coal, a special kind of coal that Ukraine burns in power stations. This led to huge increases in imports of coal, 80% of which come from Russia. More recently Ukrainian President Petro Poroshenko cut a deal while in Washington to import American coal to Ukraine, but the price is significantly higher than imports from Russia.

Pennsylvania-based coal company Xcoal Energy & Resources has signed its first contract with Ukraine's state-controlled power generation firm Centrenergo to supply 700,000 tonnes of steam coal in the coming months. “We were first contacted by the (US) Department of Commerce regarding a delegation from Ukraine to meet with coal suppliers,” Reuters quoted Xcoal spokesman Ted O'Brien as saying on July 31. “It was very much the result of a concerted effort from the governments of both countries.”

Another place where Ukraine will be wounded by the embargo is in the cut exports of raw materials that were produced in Donbas. Ukraine’s trade deficit in 2017 will probably increase by $1.8bn, corresponding to 1.9% of GDP, according to the German Advisory Group. The rebel-controlled areas were a net exporter of steel in previous years, the seizures cause a negative net effect on Ukraine’s 2017 trade balance of $0.4bn or 0.4% of GDP, so the problem of falling exports is not only due to  the Donbas conflict, but a more general problem.

Ukraine’s trade deficit more than doubled to $1.882bn in January-June, increasing by almost 2.6 times compared to the same period a year earlier, according to the State Statistics Service, reported Interfax.

However, the German Advisory Group also expects firms to find ways around these problems too as time goes on. “To sum up, the negative impact on [government controlled areas] is significant, but much smaller than the economic disturbances in previous years related to the Donbas conflict,” said the group.

Although the conflict in the Donbas had already led to the severance of most economic links between the non-controlled area (NCA) and government-controlled area (GCA), some links had persisted until 2017.

“Some companies had re-registered their NCA activities in the GCA and continued to pay taxes. These companies could transport goods across the contact line by rail and received Ukrainian certificates of origin, enabling them to export their products. These economic links first came under stress when in late January the rail transports were blockaded by activists. The situation escalated in March of this year, when the de-facto authorities in the NCA seized most remaining Ukrainian-registered companies in the NCA,” the German Advisory Group said.

Most of the loss of economic substance affects the Ukrainian steel industry, which has been deprived of large assets such as Yenakievo Iron and Steel Works, belonging to the Metinvest group, as well as Alchevsk Steel. Steel production in the NCA in 2016 was around 14% of Ukraine’s total steel production, reported the German Advisory Group.

The economy of the disputed regions has also been negatively impacted. While a lot of Ukraine’s coal was exported out of the region to the rest of the country, the region was a net importer of many of the inputs for its factories. The rebel-controlled area mainly imported iron ore (57%) and coal (32%) from the rest of the country. “At 15.7mn tonnes, the rebel area sold more to the government controlled areas than it bought from it (9.7mn tonnes),” it said.

“Our analysis shows that in both sectors, the lost inputs from the NCA can be substituted. Anthracite coal can be imported from countries such as South Africa or, although politically sensitive, Russia. Also, power plants can be converted to use more easily accessible coal types. Nuclear power plants in Ukraine also appear to have run well below their maximum effective capacities in previous years and have substantially contributed to substituting coal power since March. Hence, an energy shortage appears unlikely,” the group said.

“In the metal sector, the main dependency is coke from the NCA. Coking coal will most likely not be a bottleneck, as the NCA was a net importer of coking coal in previous years. Hence, coking coal imports can be redirected to the GCA, requiring only coking capacity. This capacity exists in the GCA. However, some risks exist with regard to Avdiivka coking plant, as it will play a pivotal role in this regard, but is situated near the contact line and has been affected by the conflict in previous years,” the report said.