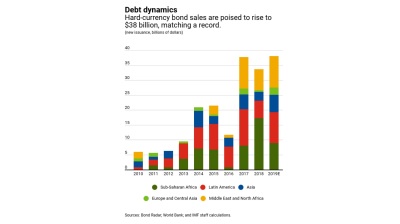 The number of low-income developing countries that are having trouble servicing their debt or in danger of difficulties has doubled since 2013 to 43%.
By International Monetary Fund November 25, 2019

Rock bottom global interest rates have been a boon for so-called frontier-market countries, which have been able to borrow cheaply to finance their development needs. But there can be too much of a good thing: countries that don’t put the money to good use may have trouble servicing their loans and find themselves at risk of default, the International Monetary Fund (IMF) said in its blog.

As the Chart of the Week shows, hard-currency bond sales by frontier issuers—countries such as Angola, Belarus, Ecuador, and Pakistan—are poised to rise to $38bn this year, close to the record set in 2017. Over the five years to mid-2019, the total stock of frontier hard-currency debt tripled to $200bn.

For some countries, overseas debt represents a growing share of financial resources. The stock of hard-currency bonds for the median frontier borrower has grown to 7% of GDP and almost half of gross reserves, from 3% of GDP and 20% of reserves in 2014. A broader group of low-income developing countries that are having trouble servicing their debt, or are at high risk of debt distress, has doubled since 2013 to 43%. Should global interest rates rise, these countries will find it even harder to service their overseas obligations—an issue highlighted in the IMF’s latest Global Financial Stability Report.

That is why frontier markets should make it a top priority to contain debt-related vulnerabilities. Countries at high risk of distress should avoid borrowing from private lenders (as opposed to advanced-economy governments that lend to low-income countries at a discount.) And they should focus on financing projects that are likely to generate high returns. Countries should also strive to improve their ability to borrow from domestic lenders and strengthen management of public investments.

With the right safeguards, frontier economies can take advantage of low-cost, hard-currency loans to improve long-term growth prospects and raise living standards for their citizens. 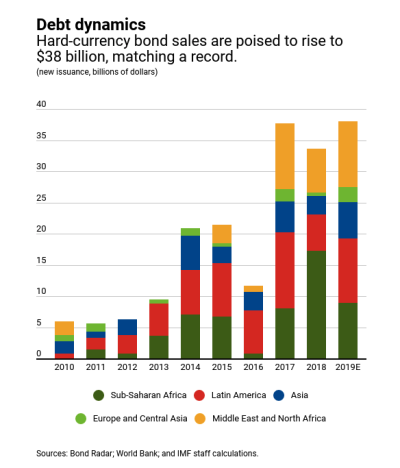 ING THINK: Growth in the Balkans: from zero to hero again?
5 days ago
FPRI BMB Ukraine: Most Ukrainians are optimistic about 2021 – poll
5 days ago
COMMENT: Record high debt levels will slow post-coronavirus recovery, threaten some countries' financial stability, says IIF
8 days ago
COMMENT: The Manafort Pardon: a finger in the collective eyes of Ukrainians
13 days ago
STOLYPIN: Scope for limited progress under Biden, so long as the past remains the past
13 days ago