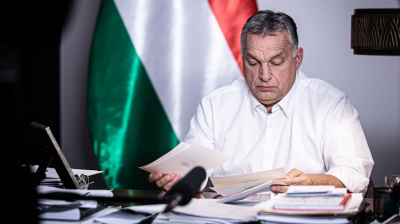 Hungary's government, under pressure from epidemiologists, took a sharp turn in managing the pandemic, deciding on new, tougher restrictions on November 9. Parliament is expected to vote on these proposals on Tuesday and on granting 90-day emergency powers to the cabinet.

These latest measures fall short of those seen during the first wave but signal a clear shift from one of the most lenient policies pursued so far.

For 30 days, Hungary will introduce a curfew between 8 pm and 5 am, all gatherings will be banned and restaurants will be closed, Prime Minister Viktor Orban said in a video posted on his Facebook page on Monday.

Shops and hairdressers will be closed from 7 pm. Hotels will not be allowed to receive tourists, only business travellers. There will be a general ban on all cultural and sporting events.

This includes football games, which have continued to be played in front of spectators. Hungary was to play in front of 20,000 fans on Thursday in a crucial qualifier against Iceland, which now will be played behind closed doors.

Family and private events may be attended by no more than ten people. At schools, digital teaching will be introduced from the ninth grade. Kindergartens and primary schools will remain open, and teachers will be tested for the virus weekly.

Leisure facilities such as gyms, swimming pools, museums and zoos will be closed. Digital education will be introduced for ninth to 12th graders and in higher education, and student hostels will be closed.

The government also decided to provide some sort of compensation for employers in the hotel and leisure sectors. Critics say that is because businessmen close Fidesz have dominant positions in these sectors.

80% of the hotel bookings placed by November 8 will be refunded for a 30-day period. Restaurants and leisure facilities will be relieved from paying payroll taxes for a month and the state will cover 50% of pay.

The new restrictions came at a time when Hungary is facing a dramatic surge in new infections. The death toll per 100,000 inhabitants is one of the highest in Europe during the second wave. The number of deaths, daily infections, and people needing hospital treatment has seen an exponential rise from mid-September.

The pandemic seems uncontrollable, we need to focus on slowing it down, said Hungary's chief medical officer.

From Tuesday all hospitals will be required to host COVID-19 patients and all low-risk operations will be rescheduled.

"The pandemic situation is severely difficult in some parts of Hungary, but we’ll manage", Orban told state radio on Friday, speaking frankly about the possibility of Hungary's hospitals being overwhelmed by sick patients. The prime minister also warned that Hungary’s health care could reach the limit of its capacities in a matter of weeks.

Orban, citing experts, said that by November 21 some 2,240 intensive-care beds will be needed, and three weeks later double that number, 4,480 beds.

"That is pretty much the limit of our capacities," he added. 4,480 patients in ICU would mean that 32,000 coronavirus patients are hospitalised.

The new restrictions will have a strong economic impact. In their first estimate analysts said they are not expecting a similar shock to the economy as during the first wave.

The direct impact will be felt in tourism and catering, but indirect effects could be much more diverse. Companies may restrain their activity due to the uncertainty of demand due to their own financial situation. A supply shock seen during the lockdown is unlikely but the restrictions could negatively impact employment, investment, and consumption, they said.

Supply chains are intact, and companies are in a much better position than they were six months ago.

In the meantime, economists and mayors of Hungary's largest cities have overwhelmingly rejected proposals by the head of the Hungarian Chamber of Commerce of Industry (MKIK), who proposed to Orban to cut the corporate tax rate from 9% to 5% and to relieve companies from paying the local business tax for one year.

This would have catastrophic impacts for local governments, which are already struggling to maintain pandemic defence after the government diverted huge sums of money from them. Since the pandemic hit Hungary in the spring, the cabinet has adopted a number of measures that are bleeding out local municipalities.