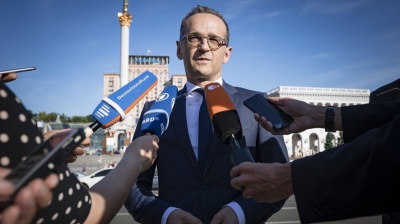 German Foreign Minister Heiko Maas said tough new sanctions would not help the jailed opposition activist Alexey Navalny and has called for dialogue with the Kremlin.
By bne IntelliNews April 27, 2021

German Foreign Minister Heiko Maas said he is opposed to new sanctions on Russia and that they would not help jailed anti-corruption activist and opposition politician Alexei Navalny, who is serving a two-year sentence on what are widely seen as trumped up charges.

Maas emphasised that dialogue with Russia is preferable to strained ties between Berlin and Moscow, reports Deutsche Welle.

Despite the flaring tensions in recent months following harsh rhetoric by Russian Foreign Minister Sergei Lavrov, who laid out new rules of the game in February, and Russian troop movements on the Ukrainian border, the European Union has been trying to find some middle ground with the Kremlin.

The EU was very slow to condemn the Navalny arrest on January 18 as soon as he returned to Russia after spending five months in Berlin recovering from an assassination attempt using the Novichok nerve agent.

It delayed imposing sanctions and waited until EU's top diplomat, Josep Borrell, was in Moscow to respond to the Navalny incident. Borrell barely mentioned Navalny while in Moscow and emphasised that the EU wanted to pursue constructive talks.

Lavrov responded by humiliating Borrell and expelled three European diplomats while at the same time sitting at the table with Borrell.

Despite these slurs many EU member states would like to normalise relations with Russia, including Germany, which has been the willing participant in the Nord Stream 2 gas pipeline project and has just closed a deal to buy 30mn Sputnik V coronavirus (COVID-19) vaccine doses.

On Sunday Maas rejected calls for harsher sanctions against Russia over the Kremlin's treatment of Navalny, who ended a three-week hunger strike after a disappointing turnout at mass rallies his allies organised last week.

Maas characterised the current German-Russian relationship as "very bad" during an interview with public broadcaster ARD, but added it "doesn't have to stay that way.”

He said the German government should engage in more dialogue with Moscow, and added it is the "essence of diplomacy" to talk with countries that have opposing viewpoints. "This is especially true for Russia right now," Maas said as cited by DW.

At the same time, Maas said German sanctions against Russia over its 2014 annexation of Crimea will continue until there is a political solution.

The EU is nervous about linking sanctions to a one-man cause following a bad experience with opposition leader, former Prime Minister and head of Batkivshchyna (Fatherland) Party Yulia Tymoshenko, who was jailed by former president Viktor Yanukovych. In what was seen at the time as a politically motivated arrest, the EU linked its aid to the Yanukovych government with demands to release Tymoshenko. She was eventually freed by the Maidan crowds in 2014, but they politely sidelined her. In the meantime European diplomats have concluded linking big issue geopolitical concerns to the fate of individual activists was a mistake. Moreover, opinion polls in Russia show that while Navalny is a well-respected anti-corruption investigative journalist, he enjoys little support as a politician and the majority of Russians are indifferent to his fate.

Maas said during the interview he believes tougher sanctions would be counterproductive in getting the Kremlin to release the opposition leader or improve his situation.

"Do you think Moscow will say 'thank you very much for imposing even tougher sanctions?'" Maas said. "I don't think so; I think the opposite would be the case," he added.

Lavrov set the bar at zero for more sanctions and threatened to break off diplomatic relations with the EU if more “economically damaging” sanctions were imposed on Russia, threats clearly Maas is taking seriously.

The German foreign minister noted that US President Joe Biden has already threatened consequences for Russia if Navalny dies while in custody.

"I believe President Putin knows exactly what to expect if it would get that far," Maas said, who also refused to rise to the bait when asked whether he agreed with Biden’s comment that Putin is a killer.