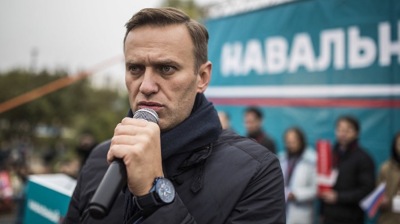 Jailed anti-corruption activist and opposition politician Alexei Navalny has ended his hunger strike after three weeks and agreed to take a vitamin treatment offered to him by prison doctors, he said in a social media post on April 23.

The decision comes only days after mass demonstrations called by Team Navalny saw tens of thousands of protesters out on the streets across Russia, but that was still considered to be a disappointingly low turnout.

The demonstration was called early, before 500,000 people had signed up to participate, as the organisers had planned, due to Navalny's failing health. His doctor warned that he could “die any day” as his potassium levels had fallen dangerously low and left him vulnerable to a heart attack.

Navalny reportedly agreed to end his hunger strike after meeting with his own doctors. The Russian prison authorities had moved him from prison, where he is serving a two-and-half-year sentence for breaking his parole conditions, to a local hospital, where he was under observation.

Navalny began refusing food on 31 March to demand better medical care. He said he had twice been seen by civilian doctors and "given the progress and circumstances, I am ending my hunger strike," in an Instagram post.

Navalny has complained of numbness and back pain and said he had not been given proper treatment by prison doctors.

In his message from the penal colony in Vladimir, east of Moscow, Navalny said he was still determined to be seen by a doctor of his choice.

"I do not withdraw the requirement to admit the necessary doctor to me – I am losing sensitivity in parts of my arms and legs, and I want to understand what it is and how to treat it, but taking into account the progress and all the circumstances, I am starting to get out of the hunger strike," Navalny said in a message shared by his team on Instagram.

He also said he was ending his strike because he had heard that some of his supporters also started a hunger strike, and that made him cry.

"I do not want anyone to experience physical suffering because of me," he wrote.

On Monday Russia's prison service claimed that Navalny's health was "satisfactory" and the Kremlin dismissed concerns about his health.

US and EU leaders have expressed concern over Navalny's health, with the US national security advisor warning of "consequences if Mr. Navalny dies."

First official results from Bosnian elections put nationalists ahead after exit polls predicted losses
10 hours ago
Georgian MPs want to rid the country of oligarchs, but not all of them
11 hours ago
Hungary agrees on deferred payments with Gazprom for winter gas deliveries
11 hours ago
US sanctions Russia’s CBR head Nabiullina and other officials
11 hours ago
Russia prepares for new attacks against Ukraine from Belarusian territory
11 hours ago