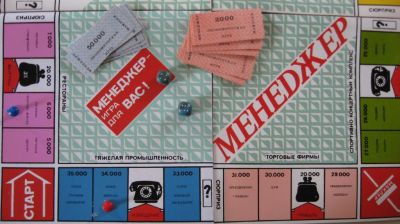 Russia's foreign CEOs are moving past 'Go' fast and hard. / Photo by Nick Allen
By Jason Corcoran in Moscow March 21, 2016

Foreign chief executives in Moscow are becoming a rare breed, as a combination of cost-cutting and the need to play fast and loose with corporate governance make them surplus to requirement in a stagnating economy.

The ouster of Swede Bo Andersson at carmaker Avtovaz in March is the most prominent dismissal of a top foreign boss in Russia since 2008, when the head of oil producer TNK-BP Bob Dudley was sensationally expelled from Russian after his visa wasn’t renewed.

Andersson, a former General Motors and Saab Automobile executive and the first non-Russian to run Avtovaz, was sacked after losses tripled last year, but insiders say he was fired for trying to deal with the corrupt supply chain. Dudley, now the head of BP, left a joint venture between the British oil company and a group of Russian tycoons in 2008 after facing personal harassment.

The ranks of foreigners have been decimated at Russian investment banks Renassiance Capital, Sberbank CIB and VTB Capital, as well as at foreign banks over the past two years, while oilfield services company Schlumberger took the nuclear option of axing all of its foreign personnel in the wake of sanctions against Russia over its interference in the Ukrainian conflict. Now, the dwindling number of foreign senior executives working in large corporates in Russia are becoming increasingly paranoid that they could be next.

“I am 150% expendable in this climate, but I am hanging on for now,” the CEO of a large company with Russian and foreign shareholders tells bne IntelliNews. “I am still here simply because Russians don’t trust Russians to run the business – never mind foreigners not trusting Russians.”

Nick Rees, a Moscow headhunter and former Russia head for SThree, explains the cost of expat chief executives on a euro/dollar/sterling package can no longer be justified after the Russian ruble’s massive devaluation. The fall in the ruble is also affecting the attitude of CEOs to working in Russia.

“Expats on local currency contracts, which was a surprisingly high percentage, simply couldn't justify seeing their earnings halve in 12 months,” Rees tells bne IntelliNews. “Many took the position that they were here for the money, so it's no surprise to see them leave, but there are still a lot of long-term expats who are committed to Russia in the longer term.

“Some sacrifices will be made as companies become desperate to cut costs, so corporate governance and compliance could definitely become more of an issue until things pick up, especially within Russian firms,” he adds.

Foreigners at the top or on boards can provide leadership and genuine experience from other markets or lend a fig-leaf of respectability for oligarchs looking to list shares or tap the capital markets for bonds and loans. But many expats now are simply seen as a luxury as the country lurches into its second year of recession and with little sign of economic sanctions being lifted.

“If you put pressure on the system, something will crack and then you will have to paper over the cracks and corporate governance can take a back seat,” a senior foreign businessman, who sits on several boards in Moscow, tells bne IntelliNews. “Expats might have a bigger problem signing off on due process vis-à-vis their Russian counterparts.”

Not all foreign bosses in Russia can claim to be whiter than white. Some even go native, like the Swedish bosses of flatpack furniture giant IKEA Per Kaufmann and Stefan Gross, who were fired in 2010 for giving the go-ahead to bribes

Ingvar Kamprad, the founder of IKEA, told journalists at the time he “was heartbroken” about colleagues of 20 years deceiving him in the company’s worst corporate scandal in history. A former director of IKEA in Russia, Lennart Dahlgren, wrote a book about the incident titled, "Despite Absurdity: How I Conquered Russia While It Conquered Me”.

Russians are sometimes seen as preferable when the country is in crisis mode. Andersson got stick for being responsible for canning 15,500 of the workforce at Lada-manufacturer AvtovAZ whereas Russian Igor Komarov didn’t face such a wave of criticism when he performed the same level of cuts as CEO in the 2008-2009 crisis.

The new head of Avtovaz is also a foreigner, Renault's Nicolas Maure, but he will share authority with Sergei Skvortsov, a top manager at state holding Rostec, according to a Vedomosti report. Skvortsov is expected to call the shots and deal with all the delicate issues such as labour relations.

Some foreign institutions in Russia, such as US lender Citigroup, have never had a local chief. Czech-born Zdenek Turek, who ran Citigroup in Moscow for five years, told this journalist in 2013 that the New York-based lender “was grooming local talent” who will eventually assume the top job. It hasn’t happened yet. Turek was replaced by Frenchman Marc Luet, who is expected to step down in September after three years. Most banking observers say they would be pleasantly surprised if Citigroup chooses a local to replace him.

Goldman Sachs, Wall Street's most profitable investment bank, last year finally decided to trust Russian financiers to run its operation in Moscow after a decade with foreigners at the top. After reshuffling the deck, the bank said in September the business will now be run Sergei Arsenyev and Dmitri Sedov, albeit with Tim Talkington, an American, who will act like a chaperone to the two Russians.

“Having even one foreigner in a Russian company can be a big draw,” the European CEO of a large Russian industrial firm tells bne IntelliNews . “If there are foreigners at the top, Russians will want to work there because there is a segment of workers who want to work for international companies. Even if the company is Russian, they will have different expectations of standards if foreigners are at the top.”

‘We’re barely afloat’ – Alarming comments by Ukrainian officials suggest problems for Kyiv in the Donbas, where Russian troops seek a ‘new Mariupol’
3 hours ago
EU’s credibility on the line over enlargement
16 hours ago
Explainer | Why Tajikistan’s Pamiris don’t trust their government
1 day ago
Meet the latest Russian tycoon to be promoted to the Premier League
1 day ago
Ruble falls to below RUB60/$1, putting pressure on the Russian budget in 2022
1 day ago