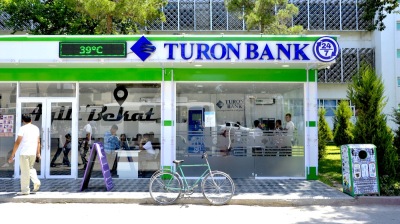 Uzbekistan's banks used to be a tool of the centralised economy but since the government removed its controls the sector has flourished. But that has brought a new set of problems. / wiki
By Ben Aris in Berlin October 10, 2021

Uzbek banks are in the limelight as the sector that is most advanced in the government’s reform and privatisation drive. One bank, mortgage specialist Ipoteka Bank, has already been sold to Hungary's OTP bank, and several more are to be put on the block soon.

The banks are being prepared for sale, but Fitch warns there is still a lot of work to do.

“Uzbek banks have a significant proportion of unseasoned exposures as a result of lending growth as well as loan [moratoria] granted in 2020 to alleviate pressure on borrowers caused by the pandemic. The sector’s longer-term performance will depend on asset quality trends, operating environment stability and how successfully the state-owned banks targeted for privatisation can shift from directed lending to a more commercial focus,” Fitch said.

Long neglected under the rule of the former president Islam Karimov, who ran a tightly controlled de facto centralised economy with strict currency and cash controls, the banking sector has flourished since Uzbek President Shavkat Mirziyoyev took over 2016.

“The sector’s asset quality risks mainly stem from rapid loan growth at most state-owned banks in recent years and a high share of foreign currency loans, particularly at larger banks. In addition, material amounts of loans are still being issued under government development programmes that require banks to target issuance volumes, in some cases resulting in relaxation of underwriting standards,” Fitch said. 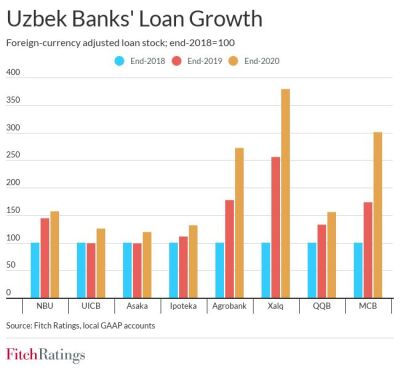 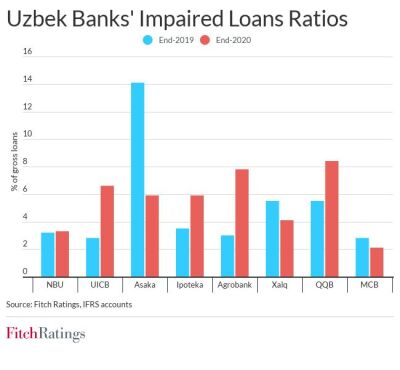 Uzbek banks often provide long grace periods of up to three years on loans, especially in cases where financing was used to set up businesses or expand production, Fitch reports.

“Asset quality metrics weakened in 2020 and we expect further deterioration in 2021-2022 now that moratoria have expired and as more grace periods come to an end. The banks’ pre-impairment profit provides only a limited buffer against a potential increase in loan impairment charges, given thin net interest margins,” Fitch said.

Impaired loans (Stage 3 loans under IFRS) increased at most banks in 2020, except for Asaka, which reclassified a large amount of its Stage 3 loans, Fitch reports.

“Although Fitch-rated banks’ impaired loans ratios were below 10% at end-2020, we do not believe this fully captures the asset quality picture. The ratios are distorted by rapid loan growth and [moratoria] and we expect Stage 3 loans to increase further as more Stage 2 and restructured loans become impaired. However, according to our discussions with rated banks, most of the exposures that underwent pandemic-related restructuring had returned to their payment schedules by end-1H21, which suggests that the pandemic has had a limited impact on asset-quality metrics,” Fitch said.

“Coverage of Stage 3 loans by total loan loss allowances was 0.5x-1.0x at large Uzbek banks at end-2020. We consider this to be adequate given the collateral and state guarantees available on some impaired exposures. However, we consider most banks’ capitalisation as only moderate in view of increasing asset quality risks, limited pre-impairment profit and a high appetite for loan growth,” Fitch added.

The Uzbek government is flush with money, thanks to the country’s gold production. And the banking sector has been able to tap international financial institution (IFI) loans, which it has used to fund lending. But this has also lead to a dollarisation of credits where interest rates are much lower. The rates on local currency loans are in double digits and unpopular as a result. One of the government’s main tasks is to bring down rates to encourages local currency credits and so reduce FX risk in the banking system.

“State-owned Uzbek banks have financed recent loan expansion mainly with state funding or external funding from international financial institutions and development banks. This reflects the moderate level of customer deposits in the local banking system. Refinancing needs are modest in the medium term as maturities of external facilities are mostly linked to funded loans, and most banks have sufficient liquidity to service external liabilities in 4Q21-2022. However, long-term repayments will depend on the performance of loan books and state-owned banks could face foreign currency liquidity gaps if there is asset quality deterioration,” Fitch said.

Six state-owned banks have been targeted for privatisation by end-2025. IFIs may initially acquire minority stakes in the banks to kick-start the process.

The government is moving cautiously with privatising the banks, wary of allowing big banking groups from countries like Russia buying into the sector, which they would dominate thanks to their sheer size. So far one bank from Georgia, TBC Bank, and another from Turkey have been allowed to do deals in Uzbekistan.

After the IFIs have taken stakes in the banks on offer and participate in completing their preparation for sale, the government intends to sell controlling stakes to strategic investors.

All banks targeted for privatisation are shifting business models from directed lending to becoming more commercially based, with a focus on improving margins and profitability metrics, Fitch reports.

EBRD 2022: President says it is supporting wartime commerce in Ukraine and planning for the future