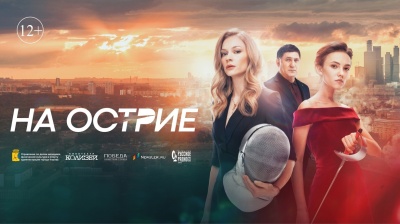 A film about fencing rivalry has done for the sport what the Netflix show The Queen's Gambit has done for chess
By Ben Aris in Berlin December 2, 2020

Following the phenomenal success of “The Queen’s Gambit,” Netflix’s fictional drama about a female chess prodigy, Russia has released its own version of the genre – except “On the edge” is about female fencing stars, not chess players.

The Queen’s Gambit has been one of the most popular shows on the online movie service in recent months and racked up 62mn views in its first 28 days after release on October 23, the company said as cited by the Wall Street Journal.

It has also lead to one of the biggest surge in chessboard sales and online chess club memberships since chess’s heyday during the Cold War and the legendary clash between the Soviet Union’s Boris Spassky and the US’ Bobby Fischer in a game held in Reykjavik Iceland – the most watched chess game of all time.

“We’re setting a new record for most new members in a single day almost every day of November,” Nick Barton, director of business development at Chess.com, a site for chess education and online play, told the Wall Street Journal.

The Russian movie about a young woman that takes up fencing has pulled off the same trick.

Alexandra Pokrovskaya is the best sabre fencer in the world and is famous, rich and happy. To go down in history, she just needs to take the last step: to win an Olympic gold. But her path is blocked by nineteen-year-old Kira Egorova, a girl from the provinces who arrived in Moscow and overnight rose to become the best fencer in the country.

Fêted on the piste and off, Kira’s goal is to take the place of Pokrovskaya and a desperate battle begins – not only in tournaments, but also in life – as the movie builds to the showdown on the piste between the two women.

Like The Queen’s Gambit, On the edge has sparked popular interest in fencing in Russia, and fencing instructors have piggy-backed on the film's popularity, referring to the film in online ads for their clubs and services.

Russia has always been strong in fencing and it has been growing in popularity in the last years due to the Russian billionaire Alisher Usmanov who, as the President of the International Fencing Federation, has been actively promoting his favourite sport, both internationally and in his homeland. “When I started fencing we had ten to twelve people in our class”, Ilya Andreev said in a recent interview, who took up the sport in 2002 and is now a European champion. “Today many schools practise selection rather than recruiting,” he added.

A hit in Russia, the movie has some crossover appeal as it stars Svetlana Khodchenkova, who is known in the West for her role as Viper in The Wolverine and as Irina, the wife of a Russian spy, in Tinker, Tailor, Soldier, Spy based on the best-selling book by John le Carré.

According to the film’s distributor, Central Partnership, the rights have been bought by distributors in several countries including Germany, China, Italy, Austria, Switzerland and others.

Russian cinema has a long and prestigious history from legendary films such as Battleship Potemkin by Sergei Eisenstein and produced at Mosfilm in Moscow – the Soviet Union’s Hollywood – through the smash hit children's animated series Masha and the Bear, where the Masha, the little girl that lives with a bear, is one of the best known children’s characters in the world.

Recently the government has been trying to revive the cinema-making industry by handing out grants to some directors in an attempt to break into the international markets, without much success so far.

But the domestic movie market has been growing quickly. On the edge premiered at the prestigious Oktyabr cinema on Novy Arbat in central Moscow in November and has been one of the highlights of the Russian movie industry this year.

Russia’s cinema business is growing three times faster than the real economy, but it's a bumpy ride. In 2018 Russian movie-goers set a new record with 56mn visits to a cinema to generate a box office take of RUB13.5bn ($200mn).

The Oktyabr cinema is an icon of the business. Established in Soviet times, it is the largest in the country and the flagship movie theatre of Karo, the third-largest chain in Russia, which primarily focuses on the big urban sprawls of Moscow and St Petersburg.

“Oktyabr was 50 years old in 2018 and the biggest in the country,” Olga Zinyakova, a former movie producer who is now Karo’s young CEO and responsible for growing the business, told bne IntelliNews in an interview last year, who adds that a fifth of the films the cinema shows are home-grown.

“Currently we have something like 20% of all movies seen in Russia that are made in Russia. And the quality of movies is growing,” says Zinyakova. “I can say that Russians like the local movies. It's a question of quality, which is always true. The problem is the amount of movies we produce is not enough. We produce about 110 movies per year, while France is producing about four or five times more.”

Like everything else in the services industry, the movie business has been set back by the coronavirus (COVID-19) pandemic as punters stay at home, but with production values rising and the market still in its infancy there is plenty of room to grow.

Netflix has already picked up the rights to Masha and the Bear, which already has a global franchise and at the start of last year it also spent $1mn to buy the rights to “Better than People,” a series about androids that has been a big hit in Russia and was released in Russian, with a local dubbing option.  The US company said it planned to launch in Russia before the end of this year and will dub its content into Russian as well as host a 100 original Russian productions on the platform by the end of 2020.

The movie industry is also attracting the interest of Russia’s leading tech players.

Russian mobile major MTS (Mobile TeleSystems) will start investing in feature film production, though its subsidiary MTS Media ready to finance up to 50% for eight to ten confirmed features a year, Kommersant daily reported on November 18.

Russian mobile major MegaFon bought 33.8% in Digital Media Holding that operates the online cinema Start and which is planning to invest RUB5bn ($63.3mn) in the service in the next three years, Vedomosti daily reported on October 28.

And Russia's largest state-controlled bank Sberbank is taking control of Rambler as the media resource for its recently launched Sber universe. Sberbank said it intended to invest RUB2bn ($28mn) in Rambler, with part of the investment aimed at boosting the market share of its subsidiary Okko, an online cinema, to turn it into the market leader by 2021.

The country won the Nagorno-Karabakh war, but can it win the peace? Crisis-hit 2020 looks to have taken 5% off Azerbaijani GDP. For now the path is clear to growth this year of around 2%.