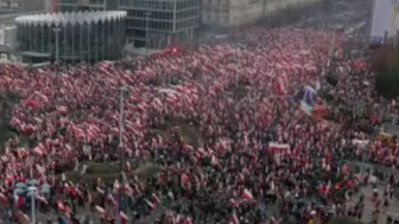 Tens of thousands of people marched through downtown Warsaw on November 11 in the 10th Independence March, an annual event that has gained notoriety because it is organised by far-right parties and groups seen as gaining strength in Poland.

The march has been divisive since its early days because it is seen as the far-right’s platform to push nationalist and fascist rhetoric at an event with popular appeal. Poland’s far-right has been on the rise recently. Its political representation, the Konfederacja party, won nearly 7% of the votes in October election and has 11 seats in the parliament.

According to the organisers, around 150,000 people attended while the Warsaw town hall’s estimate was far smaller at just under 50,000. The police are yet to release their attendance estimate.

The march, which took place after the government’s official celebrations of the 101st anniversary of Poland’s regaining independence following the end of World War One, was smaller and less raucous than last year’s when an estimated 250,000 people participated.

Last year, Poland’s President Andrzej Duda headed an official march along the same route that nationalists took only minutes later, leading to accusations that Duda and the ruling Law and Justice (PiS) were pandering to the far-right for political gain. This year, Duda and PiS held separate celebrations.

The march kicked off from near Warsaw’s Palace of Science and Culture – a gift from Soviet dictator Joseph Stalin – amidst smoke from flares, and speeches and chants praising nationalism and religion.

Many people wore “Stop 447” badges, referring to a US law looking to facilitate restitution of Jewish property taken over after World War Two. There were chants of “This is Poland, not Israel.”

The participants walked through central Warsaw and over the Vistula to finish the event by the National Stadium.

A separate anti-fascist march organised by the left took place on the same day, gathering an estimated 15,000 people, the biggest crowd in the event’s history. Also, a picket by democratic NGO Citizens of Poland was removed from the route of the nationalists' march due to safety concerns, the police said.