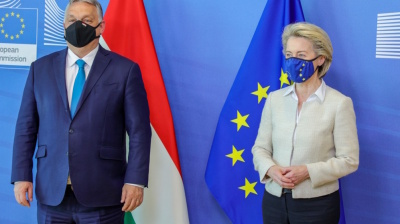 Ursula von der Leyen said the Act "clearly discriminates against people based on their sexual orientation".
By bne IntelliNews June 24, 2021

European Commission President Ursula von der Leyen in a Hungarian language Twitter post on June 23 vowed to take all legal measures against Hungary's anti-paedophilia bill , which bans content portraying or promoting homosexuality, transmitting information about LGBT or sex reassignment to anyone under 18.

"This Hungarian bill is a shame, it clearly discriminates against people based on their sexual orientation. It goes against the fundamental values of the European Union: human dignity, equality and respect for human rights," von der Leyen said.

"I will use all the powers of the Commission to ensure that the rights of all EU citizens are guaranteed. Whoever they are and wherever they live within the European Union.''

On June 22, 13 EU states had condemned Hungary’s law in a joint statement, saying the anti-LGBT clauses of the bill violate the right to free expression.

The ruling nationalist Fidesz described the legislation as an effort to protect children from paedophilia, but protesters said it is about stigmatising LGBT people. The bill enjoyed wide support from opposition parties until anti-LGBT amendments were inserted, equating sexual and gender diversity with paedophilia. There is also fear that its vague wording can be used to persecute members of the LGBT community.

The legislation fits well into Viktor Orban’s radical rightwing government’s harsh stance against sexual minorities. Marriage was redefined in the constitution as the union between one man and one woman, and limited gay adoption. It also outlawed legal status for transgender people.

Many analysts see the regulation as a trap set by the communication spin doctors of Fidesz. By rejecting the anti-paedophilia law, the ruling party can stigmatise the united opposition in cultural debates that are hard to win. The government’s staunch stance on such issues is likely to shore up its core conservative-nationalist core base ahead of the 2022 elections, which could be the closest in 20 years, when the socialist-liberal coalition ousted the first Orban government in a cliffhanger.

Hungarian President Janos Ader signed the bill into law into law on June 23, stating that the legislation did not restrict the rights of persons aged over 18 but extends the constitutional obligations on protecting minors.

The law does not include any restrictive measures for persons over 18. It does not violate the right to respect for private life and family life which is guaranteed by the constitution, President Ader said in reasoning for approving the bill. The constitution stipulates that "every child has a right to protection and care required for proper physical, intellectual and moral development," he added.

In an interview with dpa, Orban also rejected that the law would discriminate against homosexuals.

"In communist Hungary, they were persecuted, but today the state not only guarantees the rights of homosexuals but actively protects them," he said. Everybody must be free to decide for themselves which path to choose in life, Orban said.

The contested law overshadowed the Euro2020 group game between Hungary and Germany on June 23, in which Hungary was eliminated from the competition after a 2-2 draw. German political leaders supported Munich’s local government’s initiative to light up Allianz Arena in the colour of the rainbow in solidarity with the Hungarian LGBT community, which sparked angry reactions from Hungarian leaders and football-mad Orban's boycott of the game.

Szijjarto had called the action a provocation and warned against bringing politics to football. UEFA eventually refused the rainbow lighting of the stadium, but the ideological debate is expected to continue, observers said. Several stadiums around Germany were illuminated in rainbow colours in protest of the law. In Hungary, stadiums were lit up in the national red-white-green colours.