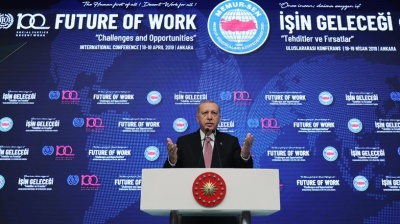 Erdogan made his remarks about the FT while addressing the Confederation of Public Servants Trade Unions (MEMUR-SEN) on April 18. / Turkish Presidency.
By bne IntelliNews April 18, 2019

Turkish President Recep Tayyip Erdogan has lashed out at the Financial Times after it reported that the Central Bank had bolstered its foreign currency reserves with short-term borrowed money, leading to concerns that Turkey might not be able to defend itself in the event of a rerun of the currency crisis it suffered last summer.

The populist Erdogan also accused the FT and other western media of falsely portraying the Turkish economy as “collapsed, finished”.

Analysts have for weeks been concerned about the unclear reasons behind movements in the central bank’s forex reserves, which became particularly pronounced as the regulator attempted to defend the Turkish lira (TRY) prior to the March 31 local elections that saw recession-hit voters in Ankara and Istanbul deal Erdogan his first major electoral reverses since he came to power 17 years ago.

After the poll defeats, Turkish finance minister and Erdogan son-in-law Berat Albayrak tried to reassure investors during presentations in Ankara and Washington that Turkey was preparing to move ahead with an effective economic reform plan, but his audiences were left rather unimpressed at his programme’s lack of detail and scale—reports that Albayrak’s presentations went down badly led to a slew of attacks in Erdogan-loyalist media in Turkey on Western publications. Markets have been further unnerved by the prospect of a rerun of the Istanbul election, fearing that the Erdogan administration, pushing allegations that the loss of the business and cultural capital to the opposition was invalid due to ballot box irregularities, will not be able to focus on getting Turkey back on the rails economically while busy with campaigning. There is also the difficulty that many analysts based in Turkey have become fearful of speaking out  about the realities of Turkey’s economic situation. The regime recently launched a probe into JPMorgan after it advised clients to sell the lira. After the banking watchdog BDDK announced the investigation, Erdogan warned analysts at investment banks: “We know the identities of all of you. We know what you are doing.”

Lira weakest in six months
The TRY weakened around 2% against the dollar following the FT report on April 17, although some of its decline was attributable to a strengthening of the USD. At its weakest point in morning trading, the TRY sank to 5.8459, the worst rate seen since last October.

Erdogan, while attacking the newspaper, insisted that the Turkish economy "is standing strong". He then claimed Turkey was being attacked because it was speaking out against injustices, including about refugees. "Oh Financial Times! What do you know about Turkey which hosts four million refugees? How many refugees are there in your country?" he said, adding: “The Financial Times had written this or that! No matter what you write, the situation of my country is clear. They will get accustomed to it. They will accept Turkey’s strength.”

In its report, the daily stated: “Reported net foreign reserves held by the central bank stood at $28.1bn in early April—a sum that investors already believed was inadequate because of Turkey’s heavy need for dollars to cover debt and foreign trade. But calculations by the Financial Times suggest that this total has been enhanced by an unusual surge in the use of short-term borrowing, or swaps, since March 25. Stripping those swaps out, the total is less than $16bn.”

In a written response to questions from the Financial Times, the central bank acknowledged publicly for the first time that its use of currency swaps “may impact reserve figures”, but said its method for accounting for them was in “full compliance with international norms”.

Market watchers uncomfortable
However, some market watchers were reportedly uncomfortable. “I don’t think these are conventional operations and they are somewhat less than transparent,” Julian Rimmer, an emerging-market equities trader at Investec Bank, was quoted as saying. He added: “A central bank cannot risk being seen as economical with the truth.”

A former senior official at Turkey’s central bank, who did not wish to be named, was cited as saying the extra dollars had been borrowed, not earned. “This is not an orthodox [approach to] central bank reserve build-up.”

Magdalena Polan, a global emerging market strategist at Legal & General Investment Management in London, said in a note: “Reserves that are not fully ‘owned’ by the Turkish central bank are not freely usable, they are effectively pledged. The issue for the CBRT [central bank] is that reserves are already low. That limits the scope of any FX intervention by the central bank”

The central bank’s short-term borrowing climbed to as much as $13bn by April 8. That was a steep rise from January 1 to March 25, when borrowing never exceeded $500m, according to the central bank’s figures available through the Bloomberg data service. The central bank has borrowed the money from Turkey’s banks, which have plenty of dollars given the rapid dollarisation that has taken place among Turkish individuals and companies amid the country’s economic travails.

One-week swaps ‘flatter’ reserves
Investors have raised concerns about the practice of using one-week currency swaps, in which the central bank exchanges TRY with local banks for USD, with an agreement that the transaction will later be reversed. Such borrowing is seen as flattering the national lender’s reserves data.

The FT further reported: “Adding to the anxiety, the boost to reserves does not precisely match the scale of borrowing through swaps, raising questions about whether some of the borrowed funds were used to support the lira. The central bank did not directly respond to a question about the discrepancy, nor to a question about whether it used measures to prop up the currency since the March 31 elections.”

“I think the general market view is that Turkey does not have enough FX reserves, and fancy swap operations don't really change that narrative,” Timothy Ash, an analyst at BlueBay Asset Management, said.

As well as a volatile currency, and big question marks over its ability to sustainably defend it, Turkey has $177bn in short-term external debt coming due in the next 12 months.