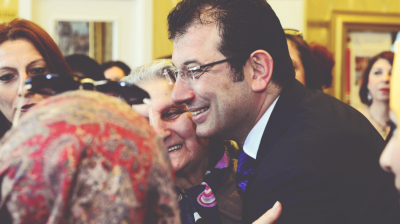 Imamoglu could very soon find himself having to battle for the mayorship all over again. / Candidate official website.
By bne IntelliNews April 17, 2019

Ekrem Imamoglu, the opposition candidate who scored the biggest triumph in the end-of-March local elections that became an unofficial referendum on President Recep Tayyip Erdogan, was declared mayor of Istanbul on April 17. He was awarded the formal mandate even though a decision is still awaited from the High Election Board (YSK) on whether to accept a formal appeal from Erdogan’s Justice and Development Party (AKP) to re-run the vote in the country’s largest city.

The markets will hope the YSK turns down the request and that Erdogan and the AKP take the defeat on the chin as a democratic expression of disapproval from voters mired in Turkey’s first recession in a decade, triggered after the country’s foreign debt-fuelled economy crashed into a currency crisis last summer. Investors would like to see the government focus on fixing the economy, but the AKP, and related Islamist predecessor parties, ruled the business and cultural capital for 25 years; they won’t give it up easily—and anyway, the rules require that in order for the AKP to pursue its “extraordinary objection” to the validity of Imamoglu’s victory, the mandate for the mayorship first needs to be granted to him.

A big sceptic when it comes to the soundness of Turkey’s remaining democratic credentials is Howard Eissenstat, associate professor of Middle East history at St. Lawrence University, New York State. After news broke of the mandate awarded to Imamoglu, Eissenstat wrote on Twitter: “Good news: Political and institutional cost of overturning the election just went way up. Bad news: Common sense (and decency) may not prevail.”

The loss of Istanbul—despite fierce campaigning on the stump by Erdogan in the build-up to the municipal polls, which saw him attend up to half a dozen rallies per day and warn his audiences that Turkey’s “survival” was at stake—is keenly felt because the now executive president rose to prominence in Turkish politics as mayor of Istanbul in 1994.

Victory margin whittled down to 13,000 votes
Republican People’s Party (CHP) candidate Imamoglu was helped to victory by the fact that other substantial opposition parties agreed not to put up candidates in the contest for the city of 16mn. In the immediate wake of the vote, his margin of victory was above 25,000 votes, but since the completion of partial recounts demanded by the AKP it has been whittled down to around 13,000 votes, or less than 0.2 percentage points ahead of the AKP candidate and former prime minister Binali Yildirim (who lost his job in mid-2018 when Erdogan’s executive presidency with sweeping powers kicked in, doing away with the post of PM and scaling down parliament’s powers).

Erdogan and his AKP triumphed in more than a dozen elections after coming to power in 2002, but their treatment of the economy and disregard for basic human rights have turned enough Turks against them to cause losses such as those seen in Istanbul and the capital Ankara, another city they had governed for a quarter of a century.

As he formally took office, Imamoglu pledged that he would work for all of Istanbul’s inhabitants.

“We never gave up, we never gave up on our battle for democracy and rights,” he said in an address to supporters at Istanbul’s municipality building, Reuters reported. “We are aware of our responsibilities and the needs of this city. We will start to serve immediately.”

“We are aware there are ongoing processes... We hope the relevant authorities will complete these processes in the most sensitive and just way,” Imamoglu also reportedly said.

Ultra-nationalists join call for annulment
It is not only the AKP that has asked the YSK to annul and re-run the election in Istanbul over what it claims were substantial irregularities. Its ultra-nationalist ally, the MHP, which forms a ruling coalition with the party in parliament, submitted a similar request on April 17.

The repeated challenges to the election result by the AKP and MHP have caused discontent among opposition supporters. Tensions spilled over into football stadiums at the weekend. Fans chanted at Istanbul derby matches for the mayoral mandate to be given to Imamoglu.

But AKP deputy chairman Ali Ihsan Yavuz kept up the drumbeat of his party’s protest while presenting a claimed justification for its demand for a new vote. “There are way too many irregularities. We are saying that organised fraud, unlawfulness and crimes were committed,” he said.

CHP deputy chairman Muharrem Erkek responded to media outlets that there were “no concrete documents, information or evidence in the AKP appeal for an annulment.”

“There is no legitimate reason at all. You are using your right [to appeal] to damage the will of Istanbul,” he said.

While the AKP was defeated in the battle for Istanbul mayor, results showed the party had won most seats in the city’s municipal councils. The AKP’s re-run appeal applies only to the mayoral elections, not those for the councils.

Wolfango Piccoli, co-president of Teneo political risk advisers, was quoted by Reuters as saying it was puzzling to call only for a re-run of the mayoral elections, and added that some of the areas where the AKP claimed fraud took place were under its responsibility. Piccoli saw the prospect of their being a fresh election as likely.

“From the market perspective, an extended period of uncertainty around elections is a bad idea—it would suggest more election-related policy easing which is bad for the [economic] rebalancing story,” Timothy Ash, senior emerging markets sovereign strategist at BlueBay Asset Management, told the news agency.

New election would be on June 2
If the AKP appeal is upheld, Istanbul, which makes up more than a third of Turkey’s economy, will head to polls again on June 2.

The crumbling of Turkey’s democracy also came back into focus just over a week ago when Human Rights Watch (HRW) released a report exploring how Turkey has arbitrarily jailed hundreds of lawyers and put them on trial in the aftermath of the botched coup attempt of July 2016.

Turkey is seen as “Not Free” by the Freedom House watchdog.

For three straight years, it has been listed by the Committee to Protect Journalists (CPJ) as the world’s biggest jailer of journalists.

Ukraine will receive $5.5bn in support from the US later this month
11 hours ago
John Malkovich to turn Skopje into Hollywood of the Balkans
11 hours ago
Envoy says start made on construction of Turkish attack drone factory in Ukraine
21 hours ago
Huge explosion rocks Russian airbase on the Crimean peninsula
1 day ago
Russia cuts oil flow via Ukraine's Druzhba pipeline, blaming sanctions for blocking transit payments
1 day ago