Czech July inflation at its highest level since mid-2020 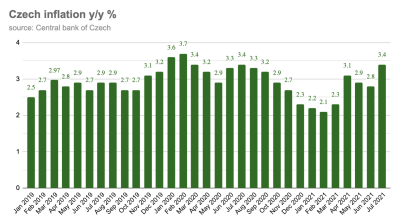 Czech consumer prices increased by 3.4% year-on-year in July, the highest figure since July last year, driven by higher prices in transport (by 18.5%) up by 0.6 percentage points (pp) month-on-month, according to statistics data published by the Czech Statistics Office on August 10.

'The biggest influence on annual price growth came for the third consecutive month from prices in transport. Prices of motor cars increased by 5.4%, prices of fuels and lubricants for personal transport equipment by 18.5%. E.g. petrol Natural 95 was sold for almost CZK33.5 per litre at petrol stations in July, which was the highest value since December 2014,” said noted Pavla Sediva, head of Consumer Price Statistics Unit of statistics office.

“According to figures released today, the price level increased by 3.4% year on year in July 2021. Inflation was thus considerably higher than in June, exceeding the upper boundary of the tolerance band around the CNB’s target. Consumer prices adjusted for the first-round effects of changes to indirect taxes rose by 3.2% year on year in July,” commented Lubos Komarek, Deputy Executive Director at the central bank´s monetary department.

“The inflation path and outlook should reassure the Czech central bank’s view that it is needed to raise interest rates further, in principle at each policy meeting in the remainder of this year,” said Radomir Jac, Generali Investments’ CEE chief economist.

In monthly terms, the consumer prices were driven by prices in recreation and culture which came mainly from growth of seasonal prices of package holidays by 23.2%. Decrease in overall m/m consumer price level in July was influenced mainly by prices in alcoholic beverages, tobacco.

According to the central bank´s forecast, annual consumer price inflation will increase above the upper boundary of the tolerance band around the 2% inflation target in the 2H21, mainly due to an upswing in food price inflation coupled with continued high core inflation and strong fuel price inflation.

“Domestic price pressures will continue to rise slightly for some time yet, mainly on the back of increased consumer demand and a gradual pick-up in wage growth. The latter will be supported by a further marked increase in the minimum wage at the start of next year. Next year, inflation will return towards the 2% target, aided by this year’s tightening of monetary conditions,” Komarek noted.