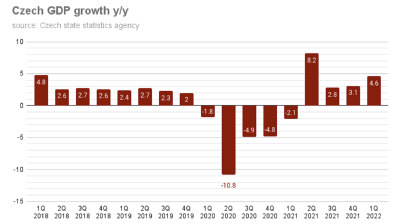 The Czech economy grew by 4.6 % year-on-year in 1Q22, according to the preliminary estimate published by the Czech Statistics Office (CSO).

"The y/y increase of the GDP was positively contributed mainly by final consumption expenditure of households and gross capital formation. On the other hand, a negative influence of external demand continued,” said Vladimir Kermiet, Director of the CSO National Accounts Department.

In quarter-on-quarter terms, Czech GDP increased by 0.7%, positively influenced mainly by gross fixed capital formation and an increase in the international trade balance.

"The 0.7% q/q expansion of Czech GDP in 1Q22 was slightly stronger than expected, although it still marked a slowdown in growth and, in particular, there were signs of weakness at the end of the quarter. We think that spillovers from the war in Ukraine will weigh heavily on industry and cause the economy to contract in 2Q22," said Joseph Marlow, Assistant Economist at Capital Economics.

According to him, Czech economy is expected to contract by 0.4% q/q in 2Q22 and stagnate for the remainder of the year. "Supply shortages as a result of the war in Ukraine, which look to have hit car production hard in March, are likely to continue in the coming months," he said.

"While a continued recovery in tourism and hospitality will lend some support to the economy, we doubt that this will be sufficient to offset falls in industrial output," he added, noting that in 2022 GDP should expand by just 2.0%.