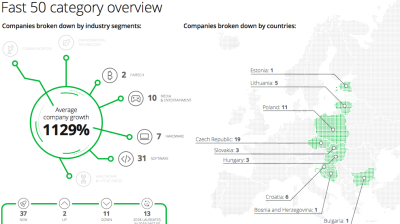 Czech companies were by far the most represented on Deloitte’s annual Central Europe Technology Fast 50 ranking.
By Clare Nuttall in Glasgow October 21, 2019

Czech companies were by far the most represented on Deloitte’s annual Central Europe Technology Fast 50 ranking, with a total of 19 companies from the Central European country, almost two-fifths of the total, included in the latest list.

This was far more than any other country from the region, with CEE’s largest economy Poland, the next source of fast-growing tech companies, accounting for just 11 companies in the 2019 ranking.

Among the other Central and Southeast European economies assessed by Deloitte, there were six entries from Croatia, five from Lithuania, three each from Hungary and Slovakia and one each from Bosnia & Herzegovina, Bulgaria and Estonia.

“But there should be no concerns about Central Europe becoming an imbalanced region. The top 10 in the Fast 50 includes companies from Slovakia (two of them), Croatia, Hungary and Estonia. The powerful representation of software businesses in the ranking mainly originates from traditionally well-anchored countries in the technology field – The Czech Republic, Hungary, Poland. This year, we also distinguish smaller countries in the region – Estonia, Bosnia & Herzegovina or Slovakia –, which suggests that new technology powerhouses may be on the rise in the Central European area,” commented Dinu Bumbacea, Consulting Partner-in-charge, Deloitte Romania.

However, no companies at all from Southeast Europe’s largest economy Romania made it onto the list, a disappointing result for Bucharest as the country has been positioning itself as a destination for the high tech industry, and was the birthplace of tech giants such as Uipath, as well as having strong niche sectors such as game development.

There is a fast turnover on the list, reflecting the rapid pace of development in the tech sector. “This year, it has been particularly pleasing to see that almost three-quarters (74%) of the companies in the ranking are in it for the first time, once again emphasising the enormous speed at which the businesses with the best ideas and most powerful breakthrough solutions can evolve,” commented Zielinska.

According to Deloitte, software companies dominated the latest CE Technology Fast 50, making up 31 of the 50 companies included this year. Software was followed by the media and entertainment segment (10 companies), hardware (seven) and fintech (two).

While Czech companies were most represented on the list, the top ranked company was Lithuanian software company Voltas IT that achieved stunning 5,734% growth in revenues between 2015 and 2018.

“Technology is advancing at a rapid pace and we strive to keep up with it. This year we have been growing very fast, but this award was unexpected and extremely happy news. Only a great team and a product you are fully committed to can achieve such results. This is an amazing evaluation that will encourage us to grow even faster and attract more professionals,” said Edvardas Astrauskas, one of the founders of Voltas IT, in response to the report.

Overall, nine countries were represented in the main ranking, registering average annual growth of 1,129% between 2015 and 2018. “This is the fourth consecutive year that the average growth rate has broken through the 1,000% mark, a result that underlines the sustainability of the technology industry in Central Europe,” said Deloitte’s press release.

Deloitte also ranked 18 “Rising Stars” — younger businesses with strong growth. Czech FF Trader, developer of an educational platform for financial markets traders, was the leader in that category with a growth rate of 1,465%. In addition, there is the “Big 5” category for fast-growing larger companies whose scale makes it difficult for them to compete in revenue growth with smaller businesses in the Fast 50 ranking; this category was led by Prusa Research, which also came second in the overall ranking.