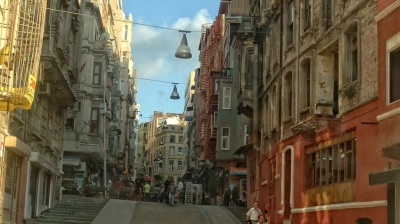 There's no escaping Turkey's economic nightmare, even in well-off districts of Istanbul such as Sisli. / Валерий Дед, cc-by-sa 3.0
By Jonny Tickle May 11, 2022

Turkey’s inflation crisis has left millions across the country turning to credit cards to feed their families.

The real-life implications of inflation that officially reached 70% in April (or an even more astonishing 157% if you believe an independent research group that the government is attempting to shut down) are stark. The gains of pay rises have been decimated. Food and non-alcoholic drinks inflation by the official measure is running at 89.1%. Great numbers are forced to go hungry, skip meals or eke out a life on a credit card balance that becomes more menacing by the day.

“Before the Covid-19 pandemic, I didn’t have a credit card,” 30-year-old graphic designer Ege told bne IntelliNews in Istanbul. “Now food prices have gone up, and my landlord wants to increase my rent. I’m borrowing more than I ever planned to.”

Ege isn’t the only one. After paying increased bills and buying basic food, many people are stuck with nothing, and are left with no choice but to seek credit. According to the Interbank Card Center, a Turkish partnership of 13 public and private Turkish banks, there are 86.2mn credit cards currently in use in Turkey—more than the country’s population of around 84mn. Just five years ago, the figure was just 58.7mn.

Most strikingly, the volume of spend on Turkish credit cards has skyrocketed in the last year. In January 2021, Turkish lira (TRY) 94bn ($6.3bn) was spent on credit card accounts. One year later, this had jumped to TRY157bn ($10.5bn, though the value of the lira versus the dollar collapsed 44% last year and it’s down by around another 14% so far this year).

Price increases, forced upon businesses by the surging costs of importing commodities, are also taking their toll on the country’s smaller businesses.

At a small independent shop in Istanbul’s well-off Sisli district, customers are buying fewer items than ever before, and are now more likely to purchase single items rather than bunches.

“Food prices are changing almost daily, and it’s hard to keep up,” Muhsin, the shop owner’s son, explained. “If we raise our prices, we worry that our customers will go elsewhere. But we can’t increase them fast enough to match the cost of food, fuel. It’s a difficult situation.”

While the ruling AKP party would like to solely blame current external events for the inflation crisis—including enduring supply chain and other impacts of the Covid-19 pandemic and economic consequences of the war in Ukraine—many continue to point the finger at the country’s leader of nearly two decades, Recep Tayyip Erdogan.

The president has famously rejected conventional economic thought, and, as a staunch opponent of high-interest rates, has continually pressured the country’s nominally independent central bank to keep borrowing costs low. His administration claims that slashing costs will stimulate the economy, increase productivity and reduce consumer prices, against the advice of most experts. Conventional wisdom suggests that low-interest rates cause inflation.

The blame game comes ahead of the parliamentary and presidential elections, due to take place by June 2023. The opposition parties have put together an unprecedented (for Turkey) alliance. Their job is to capitalise on the cost of living crisis to dislodge Erdogan. But where the wily president is concerned, things in Turkey are never straightforward.

The economics of herding in Mongolia
9 hours ago
EXPLAINER: how a price cap on Russian oil might work
14 hours ago
Russia catches a nasty dose of the Dutch Disease
17 hours ago
Sky-high inflation forces more Russians to take out “pay-day” loans
4 days ago
Death of China-to-Russia cargo transit routes means it’s all aboard for Kazakhstan
4 days ago