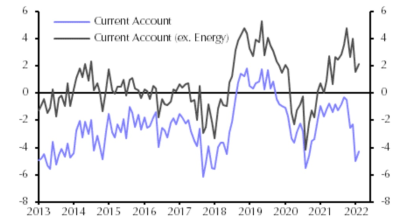 Spillovers from the war in Ukraine are likely to cause Turkey’s current account deficit to widen to more than 4% of GDP this year and, in the recent past, deficits of this scale have tended to precede sharp falls in the Turkish lira, Capital Economics said on April 25 in a note. 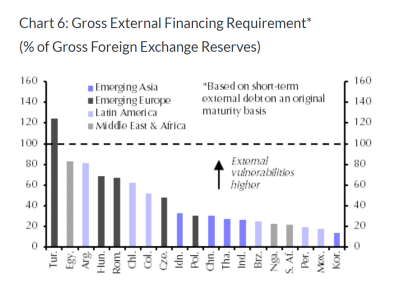 “This leaves the economy vulnerable to swings in risk appetite and a further tightening of external financing conditions, raising the risk of (renewed) sharp and disorderly falls in the lira. And given how policymakers are wedded to the ‘new economic model’ of low interest rates, we doubt they would respond with interest rate hikes. All told, we think the lira is likely to fall further to end the year at 18/$ (from 14.77/$ currently).”

The situation amounts to a splitting headache for Turkish President Recep Tayyip Erdogan who, after two decades at the helm, must call a presidential election to take place no later than June next year. The lead-up to the poll will unfold amid loud criticism from the opposition that the country’s longstanding economic crisis is the result of the economic ‘boom and bust’ mismanagement of Erdogan’s administration.

Turkey’s current account position improved over the course of last year, but it has since deteriorated sharply. Capital’s measure of the seasonally-adjusted monthly deficit in February widened to its largest level since 2018 (and a brief period in 2020), at around $4bn. 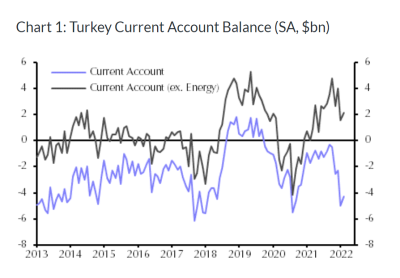 Alongside inflated energy prices, higher prices of other commodities, such as industrial metals, have also contributed to most of the rise in Turkey’s import values, he added.

The current account, said the economist, would be influenced by three key developments this year. “The first,” he wrote in the note, “is the impact of higher commodity prices. We expect the war in Ukraine to keep oil and natural gas prices high, which will add to Turkey’s import bill relative to 2021. The surge in the price of industrial metals and agricultural commodities (for which Turkey is highly dependent on Russia/Ukraine) will also keep import values high.

“The second is the impact of a loss of tourism receipts. Since 2010, ~16% of international visitors to Turkey have been from Russia or Ukraine, but these revenues will now more or less be lost.

“Admittedly the impact will probably be at least partially offset by a rebound in international tourism from elsewhere, but a large improvement in the current account driven by tourism seems unlikely.

“The third is the impact of a weaker lira on Turkey’s international competitiveness. The sharp depreciation of the lira at the end of last year should, in theory, support an improvement in the current account position. This is because it makes imports more expensive – incentivising import substitution – and exports cheaper.

“Historically, there has been a good relationship between changes in the lira and changes in trade volumes in Turkey. Following the lira crisis in 2018, Turkey’s current account shot into a surplus, as export volumes rose and import volumes plummeted. However, the same has not happened so far this year.

“We think that this is likely to reflect the impact of the policy response to last year’s currency crisis, which included a large minimum wage hike and the central bank’s decision to keep interest rates low. These have kept domestic demand strong and may have even contributed to the rise in import volumes.” 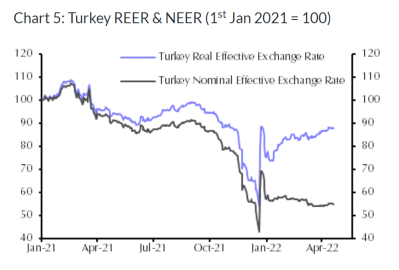 What’s more, said Marlow, export volumes do not seem to have benefited much from the fall in the lira. This, he added, may reflect the effects of high inflation, which hit an official 60% y/y in March and is likely to have eroded a large chunk of the competitiveness gains that Turkish exporters otherwise would have benefited from. “Indeed, Turkey’s real effective exchange rate – a better measure of the currency’s competitiveness than the nominal exchange rate – has actually appreciated since the start of the year,” observed Marlow.

“Overall,” he concluded, “we expect Turkey’s current account deficit to remain wide this year, as the impact of high commodity prices on imports and a weak recovery in tourism receipts on exports offset any potential impact from a weak lira on export and import volumes. We forecast the current account deficit to average 4.3% of GDP in 2022, which would be on a similar scale to the deficit preceding the currency crisis in 2018 and that before the sell-off in late 2020.”