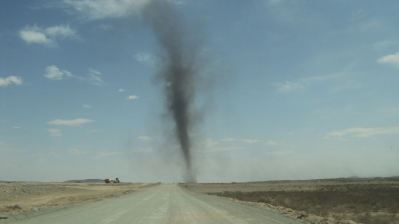 There may be more trouble ahead for SouthGobi Resources after the arrest of its CEO. Pictured is a coal devil, a common phenomenon near the company's flagship mine. / Texasbob.
By bne IntelliNews November 21, 2017

The CEO of Mongolian coal producer SouthGobi Resources has been detained in China as a suspect in a fraudulent loan case, the company said in a statement on November 20.

Aminbuhe Aminbuhe, who was arrested on October 11, is being held in Rizhao City Detention Centre, it added. In his absence, Bing Wang is serving as SouthGobi’s interim CEO.

SouthGobi, also listed on the Toronto stock exchange, is the latest company linked to allegations of illicit conduct amid growing concerns over the regulation of Hong Kong-listed securities in China, Bloomberg suggested. It noted that the company’s shares had fallen 13.6% to the lowest price in over a year. The company operates the Ovoot Tolgoi metallurgical coal mine, located about 40 kilometres (25 miles) from the Shivee Khuren-Ceke crossing at the Mongolia-China border.

SouthGobi said it would initiate an internal investigation into the charges against Aminbuhe and potential connections to the company, for which the CEO also serves as chairman of the board. In the meantime, the company is planning to continue with business as usual.

Coal producers have been the main driving force behind Mongolia’s recovering economy of late. That’s thanks to increased demand for Mongolian coal exports in China, given that Beijing has banned the purchase of coal consignments from North Korea in line with international sanctions imposed in response to the row over the Pyongyang's refusal to stop testing ballistic missiles and nuclear weapons. Mongolian coal exports grew more than threefold across January-October, with Mongolia’s  trade surplus expanding by 73.3% y/y to $1.7bn in the first 10 months of the year, latest figures published by the National Statistics Office show.

SouthGobi promotes itself as an integrated coal supplier which aims to become a conglomerate with diversified businesses in Mongolia to bridge the business opportunities between China and Mongolia, especially given the roll out of China’s huge One Belt One Road trade infrastructure investment. It owns strategically located coal assets with logistics infrastructure and trading capabilities. Coal from flagship mine Ovoot Tolgoi can be transported by rail to major coal consuming hubs in China.

The mining and exploration licences of other metallurgical and thermal coal deposits in the South Gobi Province of Mongolia are held by SouthGobi.