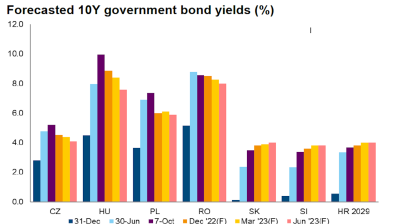 Central and Eastern Europe is heading for a “huge correction” in bond yields over the next three quarters, according to Erste Bank, the largest bank based in the region (excluding Russia) by assets.

Erste said it expected a correction of 200 basis points in 10-year yields in Hungary, and from 80-140 bp in Czechia, Poland and Romania, according to a note published on October 10. For Croatia, Slovenia and Slovakia, the Austrian bank predicts a smaller rise of around 30-50 bp.

Bond yield curves will become “even more inverted”, it warns, meaning that short-term rates are higher than long-term ones, typically a sign of looming recession.

The shift in yields follows the end of central bank tightening cycles in the region, as attention turns to the fear of recession rather than inflation, which has been the focus up to now because of supply chain problems and soaring energy and food prices.

Despite inflation still being elevated, all three independent central banks have now halted or at least paused their tightening cycles.

The Czech National Bank (CNB) kept its key interest rate unchanged at 7% in early August, making it the first bank in Emerging Europe to halt the tightening cycle. Erste predicts Czech rates will even start to be reduced in May or June next year.

The Hungarian National Bank (MNB) also ended its tightening cycle on September 27, with rates hiked to 13%, which triggered a sell-off in the forint.

The National Bank of Poland (NBP) also surprised the market by keeping rates at 6.75% at its last meeting on October 5, though Governor Adam Glampinski stressed afterwards that this was a pause rather than a halt.

Romania and Serbia are predicted to end their tightening cycles in 4Q22 and 1Q23 respectively.

Instead central banks have indicated they will use other tools for reducing liquidity, which will support their currencies and indirectly tighten monetary policy. Erste says the CNB will begin selling off the huge foreign reserves it has built up, as a way of supporting the koruna and reducing liquidity in the market, both of which should tighten monetary conditions. The MNB will instead use increases in the reserve ratio and longer sterilisation instruments.

The end of the Central European tightening cycle comes as the European Central Bank (ECB) and the US Fed begin to raise rates, which, along with risk aversion because of Russia’s invasion of Ukraine, has put further pressure on CEE bonds.

The changing global interest rate environment has put Hungary’s central bank in a particularly difficult situation because of the fiscal profligacy of Viktor Orban’s regime ahead of the general elections in April, and the freezing of Hungary’s EU Recovery and Resilience (RRF) and Cohesion Funds over its violations of the rule of law and rampant corruption. The pile-up of economic problems has hit the forint, which is the worst performing currency in Europe so far this year.

Erste says the rise in global interest rates is already having an impact on the cost of government borrowing in the region, at a time when many countries are running high budget deficits because of the cost of helping citizens and businesses cope first with the coronavirus (COVID-19) pandemic and now the surge in energy prices. Fortunately, it says, most countries – apart from Romania – have no urgent foreign currency needs.

Romania’s recent expensive eurobond issue has also caused other countries to put their FX borrowing plans “on the back burner”, Erste says, and look to shorter-term local currency domestic options such as Treasury Bills. It predicts, however, that Hungary will make some FX issuances in early 2023, in addition to a CNY2bn (€300mn) Panda bond planned before the end of this year.