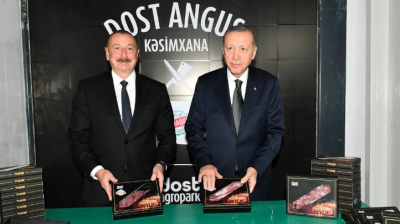 Butchering the competition: Aliyev and Erdogan at the opening of Dost Agropark on October 20. / president.az.
By Ulqar Natiqqizi for Eurasianet October 25, 2022

Following Azerbaijan’s victory over Armenia in the 2020 war, one of the biggest beneficiaries has been Turkey.

Turkey gave substantial military aid to Azerbaijan in the war, and the aid is now being reciprocated: Companies close to Turkish President Recep Tayyip Erdogan have received at least hundreds of millions of dollars in contracts, particularly in the reconstruction of the territories in Karabakh that Azerbaijan retook in the war.

In some cases, the relationships go beyond business and politics: In one large new agricultural complex in the Zangilan region, members of Erdogan’s family are business partners with members of President Ilham Aliyev’s family.

Erdogan and Aliyev laid the foundation for the Dost (“Friend”) Agropark in October 2021, and the two visited it again on October 20, when they took a tour around Karabakh as part of the inauguration of a new airport in Zangilan, near the borders with Armenia and Iran.

The Dost Agropark is envisaged as a $100mn project that will eventually employ 500 people raising up to 10,000 head of cattle.

Accompanying Erdogan on his trip around Karabakh was Abdulkadir Karagoz, the owner of Dost Ziraat, the Turkish investor in the Dost Agropark. Karagoz is not just a business ally but a member of Erdogan’s family; he is married to Erdogan’s niece, the daughter of Erdogan’s brother Mustafa Erdogan.

Shortly after the 2016 wedding, Karagoz (via a different company, which he also headed) began winning conspicuous amounts of government contracts, in many of which his firm was the only one participating.

Also following the wedding, he began to take tighter control of Dost, which he co-founded in 2010. By 2017, the company’s other shareholders had left. Meanwhile, other Erdogan family members joined. 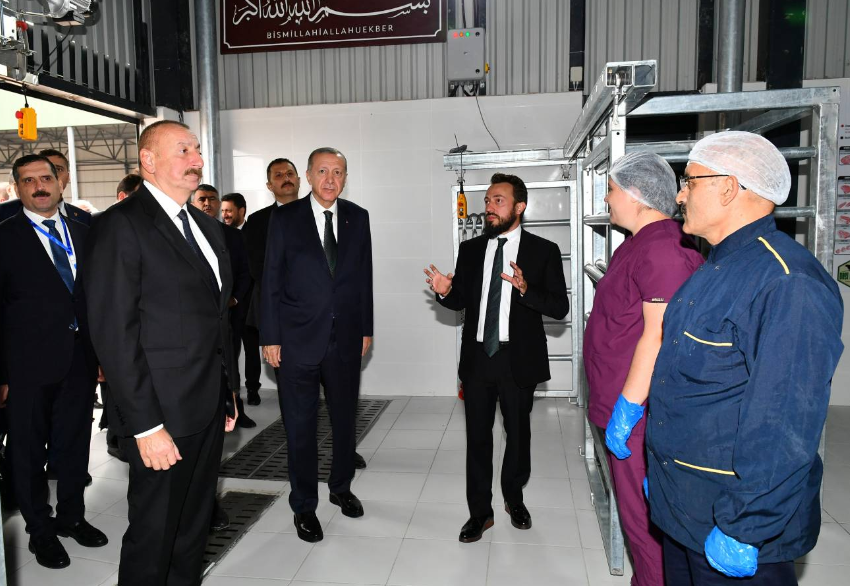 Documents in Turkey’s official Trade Registry Gazette reviewed by Eurasianet show that just over a year after the wedding, more of Erdogan’s family members (two nephews) became shareholders in Dost Ziraat: Usame Erdogan, son of Mustafa; and Ahmet Enes Ilgen, son of Erdogan’s sister Vesile Ilgen. By 2020, however, other documents in the registry indicate that the two nephews no longer held shares in the company and that Karagoz was the only shareholder.

On the Azerbaijani side the investor is Pasha Investments, part of the Pasha Holding company that brings together all of the firms owned by the family of Aliyev’s wife and first vice president, Mehriban Aliyeva.

The management of the agropark, meanwhile, is in the hands of another Erdogan ally: the CEO is Mehmet Zeki Tugrul, who has been both a vice chairman of Dost Ziraat’s management board as well as a board member of the youth wing of Turkey’s ruling Justice and Development Party (AKP).

On their October 20 visit to the park, both presidents briefly responded to questions from journalists. Erdogan referred to Karagoz as “the person in charge here” and when asked if the agropark may be expanded later, Aliyev responded: “That depends on Mr Abdulkadir.” Erdogan added: “Whatever he wants will be the case.”

Karagoz himself chimed in: “Of course, it will expand. Inshallah, we will continue in Lachin,” he said, referring to another territory retaken in the 2020 war.

Karagoz was not the only Turkish businessman in Erdogan’s entourage. Others included Cemal Kalyoncu, the chairman of Kalyon Holding; Mehmet Cengiz, chairman of Cengiz Holding; and Yildirim Demiroren, chairman of Demiroren Holding. All three had also joined Erdogan in his previous Karabakh visit.

In remarks that he made in Jabrayil, Erdogan alluded to the poor state of the current road there. “I think that in a year from now, we’ll see the road to Jabrayil in a completely different state, because serious steps are also being taken related to infrastructure issues,” he said. “Steps have been taken here thanks to the joint work of Cengiz and Kalyon companies.”

While these businesses don’t have family connections to Erdogan, they are key political allies. Cengiz and Kalyon are two of what has become known as the “Gang of Five” Turkish firms that have close links to Erdogan and the ruling party and which have been awarded most large government tenders during Erdogan’s rule.

Now both Kalyon and Cengiz have been awarded lucrative contracts for work in Karabakh, as well, including construction of roads and the operation of three mines, particularly of gold and copper. Kalyon is constructing the Horadiz-Aghband railway line that is envisaged as part of the transport route connecting Azerbaijan’s exclave of Nakhchivan to the mainland via southern Armenia. That project is projected to cost more than 312mn manats (over $180mn) and to be completed in 2023.

Another “Gang of Five” company, Kolin Insaat, also has gotten a lucrative road construction contract in Karabakh, to build the “Victory Road” to Shusha along with an Azerbaijani firm, Azvirt. Kolin also was involved in the establishment of a market (located on “Turkey-Azerbaijan Friendship Street”) in the village of Agali, where the first few Azerbaijanis to resettle in Karabakh have moved.

In total, the Azerbaijani government has allocated over 4.8bn manats (nearly $2.9bn) for reconstruction and restoration projects in Karabakh. Data have not been published breaking down which countries’ companies get contracts, and other countries perceived to be friendly, including Italy, Israel, and the United Kingdom, also have gotten contracts. But Turkish firms appear to be the biggest winners of the contracts.

There are roughly 30 Turkish companies operating in Karabakh, according to the Turkish embassy in Baku. “These companies have already invested $1 billion, and these investments will continue to grow,” said Yakup Sefer, Turkey’s chief trade counsellor in Baku, at a July business forum.

Another major Turkish firm, Demiroren Holding, hasn’t been publicly awarded any Karabakh-related projects but it has won other major recent contracts in Azerbaijan. In 2021 it got a 10-year contract to run the state lottery, and signed a memorandum of understanding with the Economy Ministry to build a $40mn pharmaceutical plant.

Asked by an Italian journalist in a September interview about the prospects for firms from that country getting construction contracts for Karabakh, Aliyev responded that Italy would be in second place – behind Turkey. “It is our neighbour and they have very prominent construction companies,” he said of Turkey. “Because it is our ally and close friend.”