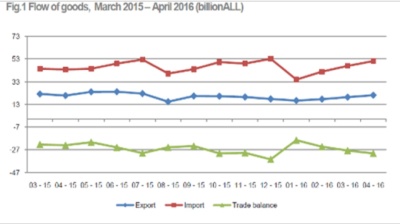 By Valentina Dimitrievska in Skopje May 30, 2016

Albania's foreign trade deficit widened by 20.8% y/y to nearly ALL100.4bn (€726.5mn) in the first four months of 2016, as exports declined and imports went up, according to data from the statistics institute INSTAT on May 30.

In the first four months, machinery and equipment, food and beverages, construction materials, chemical and plastics products as well as textile and footwear dominated among imported products in terms of value, while textile products as well as mineral and fuels were top among exported items. According to the European Commission, Albania’s trade gap in terms of goods is expected to reach 23.4% of GDP in 2016, from 22.4% of GDP in 2015.

In April, the annual increase of exports was influenced by the textile and footwear group (+11.3pp) and food, beverages and tobacco (+3.6pp). A negative contribution of -12.3pp was from minerals, fuels and electricity group followed by the group of machinery and equipment spare parts, -1.1pp.

Imports were positively influenced by the construction materials and metals  group (+11pp) followed by the group of textile and footwear group, which contributed +3.6pp. A negative influence came from the group of minerals, fuels and electricity (-4.3pp).