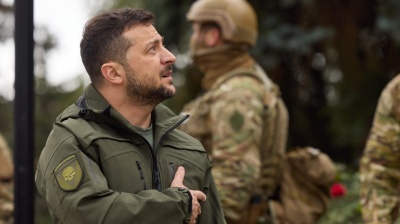 President Volodymyr Zelenskiy on a visit to the Kharkiv region last week. / President of Ukraine's website
By Dominic Culverwell in Berlin September 19, 2022

Ukraine is continuing to exhume the approximately 450 bodies found in a mass grave in the newly liberated city of Izyum in the Kharkiv region, many of them showing signs of torture, after what looks like the worst mass killing of civilians in Europe since the 1995 Srebrenica massacre, itself the worst atrocity since the Nazi depredations in the Second World War.

Kyiv has accused Moscow of crimes against humanity and President Volodymyr Zelenskiy has once again called for Russia to be designated a “terrorist state”, specifically requesting the USA support Kyiv’s proposal. So far, Washington hasn’t followed through with Zelenskiy’s requests, though with yet another massacre of civilians on record, President Joe Biden may feel the pressure to take further action.

The exhumation of hundreds of corpses in Izyum is continuing “non-stop”, says the Ministry of Defence of Ukraine.

Izyum fell to Russian forces on April 1 but was retaken by Ukrainian forces during the Kharkiv counter-offensive earlier this month. The discovery of hundreds of mutilated bodies and six torture chambers has shocked the world, with the UN High Commissioner for Human Rights requesting a team be sent to confirm Kyiv’s accusations that civilians are amongst the victims.

"To date, 450 dead and buried have been found in Izyum. But there are still separate graves where many tortured people are buried – whole families ... All this is in Izyum, in those pits ... Just bodies thrown in there," Zelenskiy said, reported Ukrinform.

The actual number of dead is expected to be higher than even the Bucha massacre, committed during the Russian occupation of Kyiv Oblast from February to April. At least 458 civilians were killed in Bucha and a total of 1,300 bodies were found in the whole of the Kyiv region. The atrocity resulted in further sanctions and Russia’s expulsion from the UN Human Rights Council. Amongst the bodies found in Izyum, several had their hands tied behind their back, whilst at least one was buried with a rope around their neck.

“Each day, injuries are being recorded and bodies are being reburied. It will take many long and exhausting hours for investigators to reveal the magnitude of the genocide perpetrated by Russian murderers,” wrote the Ministry of Defence of Ukraine on Twitter.

The European Union High Representative Josep Borrel condemned the atrocities and said that Russia’s invasion “has been leaving a trail of blood and destruction across Ukraine”, describing the behaviour of Russian troops as “inhuman”.

Civilians, children and military personnel make up the bodies found in the mass graves. Whilst the majority showed signs of a "violent death", according to the governor of Kharkiv region Oleh Synyehubov, others died of sickness or missile strikes. In addition to the mass graves, searches are underway to collect bodies from the rubble of shelled buildings.

Unsurprisingly, as with Bucha, Moscow has rejected Kyiv’s accusations. “It is the same scenario as in Bucha. It’s a lie, and of course we will defend the truth in this story,” Kremlin spokesman Dmitry Peskov told reporters, according to Al-Jazeera.