Zelenskiy says he is not sure Putin is alive, in Davos speech 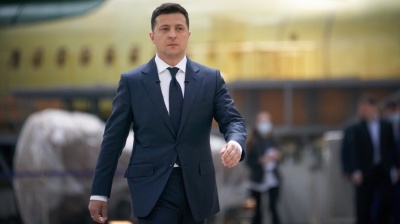 Speaking by video link, Ukrainian President Volodymyr Zelenskiy told delegates at Davos that he was not sure Russian President Vladimir Putin was still alive or who is in charge in the Kremlin. Ukraine’s repeated offers to start peace talks have gone ignored. / bne IntelliNews
By bne IntelliNews January 20, 2023

At the remote Ukrainian Breakfast hosted as part of the Davos 2023 forum, Ukrainian President Volodymyr Zelenskiy expressed doubt about the possibility of peace talks with Russia – and whether Vladimir Putin is still “alive.”

“I don’t quite understand,” he said, “whom to talk to, and what about. I’m not sure that this “president of Russia” – who poses against a green screen every now and then – that this is really him. I cannot make out if he’s really alive, whether it’s him making decisions or someone else. What circle of people is it? I have no information.”

“I don’t quite understand how someone can promise the European leadership one thing – and start an invasion of another state the next day. You see, I don’t understand who it is that we’re dealing with. When we speak about “peace talks” – I don’t understand whom we’d be talking to… I think that Russia needs to produce somebody first, and then propose something.”

Commenting further on the prospect of peace talks with Russia, Zelenskiy noted that, during his presidency, Ukraine had done everything to liberate its territories diplomatically, constantly offering opportunities for talks and negotiations. “But someone there wouldn’t want to talk, or wouldn’t have the time, or would be sceptical, or would insist on certain conditions,” said Zelenskiy.

Kremlin spokesman Dmitry Peskov responded to Zelenskiy’s remarks in his own way: “Psychologically, Zelenskiy would have preferred if there were no Russia and no Putin. But the sooner he recognises that Russia and Putin do, and will continue to exist, and that sooner or later it’ll become necessary to give up all that is anti-Russian, the better for a country like Ukraine.”

The sooner Ukraine “demonstrates a readiness to take Russia’s demands into consideration,” the sooner the Ukrainian people will recover from “the tragedy staged by the Kyiv regime,” said Peskov.

Russian authorities have often expressed readiness for peace talks with Ukraine, blaming Kyiv for stalling dialogue. At the same time, Moscow continues to insist that talks can only be possible if Ukraine accepts Russia’s conditions – mainly, Russia’s undisputed right to keep the annexed Ukrainian territories. Kyiv, in turn, has declined to countenance Moscow’s ultimatums – or to talk the current Russian president.