Zelenskiy rebukes Germany for realising too late what Russia is, says tear down the wall between peace and strife 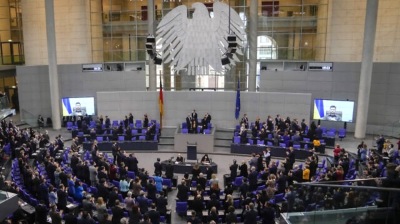 "Every year they repeat in Germany: “Never again.” But these words are worthless today," Zelenskiy told German lawmakers. "And I ask you, dear Chancellor, to tear down this wall, to give Germany the leading role it deserves." / wiki
By bne IntelliNews March 18, 2022

Ukrainian President Volodymyr Zelenskiy roasted German lawmakers during a video address on March 17, rebuking them for realising too late what Russia is and calling on the Bundestag to “tear down this wall” between peace and war in Europe.

Zelenskiy has become increasingly angry with Ukraine’s European partners after Nato made it clear that it would not come to Kyiv’s rescue after Russia’s attack on Ukraine on February 24.

In a particularly angry comments made to foreign correspondents on March 4 shortly after the war started he lambasted Nato for refusing to join Ukrainian in defence of the country or close the skies to Russian ariel attack.

"If you can't close the sky now, then give a deadline when it will happen. If you can't do it now, tell me how many people have to explode, how many arms, legs, heads have to fly to reach you? Tell me how many. I'll go to count and wait for this moment," Zelenskiy told reporters.

That admonishment became particularly poignant after a Russian bomber destroyed a theatre in Mariupol on March 16 where an estimated 500 refugees, mostly women and children, were taking shelter with massive loss of life.

The Ukrainian president has now given up on ambitions to join the military alliance and said Ukraine would no longer pursue Nato membership in an interview with ABC News on 7 March.

Appearing on a screen in his now trademark khaki t-shirt and with dark rings under his eyes as well as several days of stubble, Zelenskiy was welcomed by MPs in the Bundestag with a standing ovation. Addressing the Bundestag Zelenskiy thanked Germany for assistance, but stressed that "many steps to support [Ukraine] were late and insufficient," according to an Ukrinform correspondent.

Germany has been the most reluctant to punish Russia for its aggression against Ukraine as it has by far the largest commercial interests in Russia. German Chancellor Olaf Scholz dragged his heels in commitments to shutter the Nord Stream 2 gas pipeline should Russia invade, in the days before the invasion happened. But when it did he immediately made it impossible for the pipeline to gain regulatory approval, effectively mothballing the project for the immediate future.

Germany has also refused to allow the delivery of offensive weapons to Ukraine, citing German laws that forbid the delivery of weapons to “crisis zones.” Berlin was ridiculed when all it sent in the run up to the war was 5,000 helmets.

Zelenskiy pointed to the close ties between German and Russian businesses. Russia has been a large and extremely lucrative market for German engineering giant Siemens and Germany has ten-time the number of companies register in Russia than any other EU ally.

Zelenskiy said Ukraine had long warned that the construction of the Nord Stream 2 gas pipeline was part of preparation for war, "but in response, it heard only: economy, economy, economy."

Zelenskiy also took a swipe at Scholz’s rebuttal to Putin’s demand that Ukraine be locked out of Nato, saying that the issue was "not on the table and not in the foreseeable future" adding that he didn't understand why the Kremlin was making such a fuss.

The situation is similar with the issue of Ukraine's EU membership. "For many, it's politics, but it's the stone for a new wall," he warned.

Zelenskiy took some time out to thank ordinary Germans for welcoming refugees streaming out of the warzone. As of March 17 more than 3mn people had left the country with 1.5mn going to Poland, but an estimated 100,000 having already crossed the border to Germany where they have been invited into private homes and warmly received.

But Zelenskiy could not hold back the obvious bitterness he feels at being left to face the might of the Russian army along and threw one of Germany’s most iconic phrases back into the faces of the lawmakers. "Every year they repeat in Germany: “Never again.” But these words are worthless today,” which refers to Germany’s commitment to never repeat the atrocity of the rise of the Nazis.

Zelenskiy concluded his speech by echoing US President Ronald Reagan famous taunt to Soviet President Mikhail Gorbachev during a trip to Berlin during the Cold War: “Mr. President, tear down this wall!"

“It's not a Berlin Wall - it is a Wall in central Europe between freedom and bondage and this Wall is growing bigger with every bomb' dropped on Ukraine,” he told MPs.

Zelenskiy said: "And I ask you, dear Chancellor, to tear down this wall, to give Germany the leading role it deserves. Support Ukraine, stop this war, help us stop this war!”