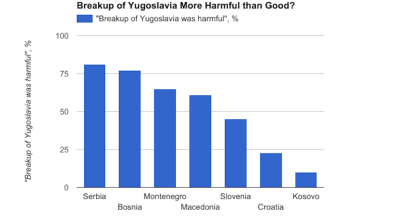 Residents of most former Yugoslavian countries still feel the break-up of the federation has harmed their country, a Gallup poll showed on May 18.

“Many residents of the former Socialist Federal Republic of Yugoslavia feel its break-up 25 years ago harmed their country,” Gallup said in a statement. “These residents may be mourning the loss of the benefits that socialism provided or be frustrated with the current high unemployment rate, the loss of income, or the lost illusion of peaceful coexistence among different groups.”

Yugoslavia started to split up at the beginning of the 1990s, and its citizens endured almost a decade of ethnic conflict. Political stability across the region is still threatened by ethnic tensions.

As many as 81% of Serbians think that the breakup of Yugoslavia harmed their country, while 77% of Bosnians and 65% of Macedonians agree. Only 4% of Serbians think that the break-up of Yugoslavia was beneficial for their country, while just 6% of Bosnians and 15% of Montenegrins feel positive about the split.

The negative attitudes in Bosnia & Herzegovina may be linked to frustration with persistently poor government performance, Gallup said in an emailed statement. “Similar to Russian attitudes toward the dissolution of the former Soviet Union, Serbians may feel an acute sense of loss as the core nation of a former multinational state,” the report said.

In Macedonia, where the lengthy political crisis recently erupted into violence within the parliament, 61% of participants see the break-up harmful, while 12% think it was a positive development for their country.

But this nostalgia is not uniform across the region. The highest rates for people who think that the break-up of Yugoslavia was beneficial were recorded in Croatia and Kosovo.

The highest number of respondents who welcomed the break-up of Yugoslavia were in Kosovo, the last country in the region to gain its independence, where 75% said the split was beneficial and only 10% regretted it.

Ethnic minorities are more likely to see the break-up as harmful, according to Gallup.

The survey was conducted among 1,000 adults from the seven former Yugoslavian countries: Bosnia, Croatia, Kosovo, Macedonia, Montenegro, Serbia and Slovenia.

Romania’s inflation up in April on higher fuel and electricity prices
2 days ago
Romania’s net wage hits record €726 in March
2 days ago
Slovenia reports hike in demand for new workers in manufacturing and retail sectors
3 days ago
Inflation in Belarus at 4.6% in April
3 days ago
Polish gross wages pick up growth to 6.6% y/y in Q1
3 days ago