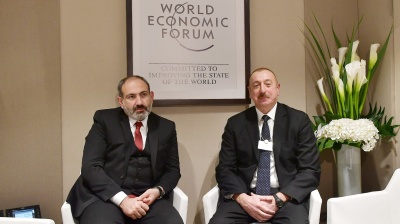 Armenian PM Nikol Pashian (left) and Azerbaijani President Ilham Aliyev have had face to face meetings in the past two years but the encounters essentially only led to more accusations and counter-accusations.
By bne IntelIiNews July 23, 2020

The Trump administration is “paying little attention” to the worst fighting between Armenia and Azerbaijan since the two countries’ “Four Day War” in April 2016, according to an assessment of the hostilities by Paul Stronski, senior fellow at the Carnegie Endowment for International Peace think tank.

Noting that neighbouring Iran had pledged to help mediate between the two sides, Stronski wrote: “In the United States, however, senior government officials are paying little attention. U.S. Secretary of State Mike Pompeo did not appear to raise the issue in his July 13 phone call with [Russian Foreign Minister Sergei] Lavrov and waited two more days before commenting on the issue in a press conference.

“Despite being in its fourth year of office, the administration of President Donald Trump has yet to issue a policy on the South Caucasus region, creating a vacuum that other powers—including Iran and Russia—appear eager to fill. The lack of senior level response to the latest violence shows once again that Washington does not see the Caucasus as a priority.”

The Armenian diaspora is heavily represented in California and New York City. Armenian-Americans have mounted several demonstrations in the US against claimed Azerbaijani aggression since the outbreak of hostilities.

The July 12 skirmishes between Armenia and Azerbaijan are thought to have claimed the lives of at least 16 soldiers, mostly those of Azerbaijani servicemen.

Stronski said it was as yet still unclear who started the fighting.

Since the clashes, Turkish Erdogan administration politicians and Turkish defence industry representatives have vocally reiterated how Turkey was ready to come to Azerbaijan’s aid in the event of any major fighting.

Stronski also observed: “Military conflict is the last thing that either country needs right now. Both Armenia and Azerbaijan are struggling to contain the coronavirus pandemic. Neither country benefits from an escalating conflict right now. Fighting complicates what already is a delicate humanitarian situation across the region. Russia, Iran, and Central Asia are all coping with extremely high infection rates from the coronavirus, rising unemployment, and struggling economies.”

Late on July 21, the Armenian military accused Azerbaijani forces of again attacking one of its positions at a section of the border where the deadly fighting took place last week.

Armenian defence ministry spokesperson Shushan Stepanian said that an Azerbaijani commando unit suffered heavy losses while being repelled by Armenian troops deployed in the Tavush region. Some of the unit's soldiers were "left trapped" as a result of the failed incursion, she added without providing more details.

"The Armenian side suffered no casualties," Stepanian wrote on Facebook.

"There were no new attacks, let alone casualties, from our side," spokesman for the ministry Vagif Dargahli said. "The Armenian report is yet another disinformation."

Dargahli said the situation on the border between Tavush and the Tovuz district in western Azerbaijan remained "tense but stable".

The Organisation for Security and Cooperation in Europe (OSCE) last week issued a statement urging the sides to resume peace talks. It is specifically the Minsk Group of the OSCE, co-chaired by France, Russia and the US, that has mediated the Nagorno-Karabakh conflict since the ceasefire. It urges both sides to abide by the ceasefire, return to negotiations, and curb their inflammatory rhetoric. Some critics say Russia has complicated the situation by selling arms to both Armenia and Azerbaijan.

Since the late Soviet era, Armenia and Azerbaijan have fought over Nagorno-Karabakh, a largely ethnically Armenian breakaway region of Azerbaijan. After the demise of the Soviet Union, ethnic Armenians in the territory declared their independence from Azerbaijan. But Azerbaijan still considers the area part of its sovereign territory and it is internationally recognised as such.

In 1994, the two sides reached a ceasefire, which brought on a period of relative stability. In the past 25 years, occasional skirmishes have continued to take place along the Nagorno-Karabakh line of contact, but the latest escalation went much further. Fighting took place in areas populated with civilian villages on both sides. One elderly Azerbaijani civilian is believed to have been killed during the confrontation.