The rapid rise of Viktor Polishchuk, the largely unknown owner of Ukraine's second largest electronics retailer, has long raised suspicions of good political connections: Ukrainian media have linked him not only to former Ukrainian president Viktor Yanukovych but even to Russian Prime Minister Dmitry Medvedev. These suspicions – which bne IntelliNews has investigated – have now stymied his attempts to build up a parallel banking empire.

2013 was the breakthrough year for Polishchuk (whose first name is spelt "Victor" on Wikipedia), then the owner of Tekhnopolis – Ukraine's eighth largest electronics retail chain. He acquired the much larger Eldorado chain for an estimated $100mn, according to media reports, merging them into what is now gadget-mad Ukraine's second largest electronics retailer with more than 150 stores.

In the same year, Polishchuk opened Kyiv's most prestigious development, the gleaming high-rise Gulliver mall and office complex in the very heart of Kyiv, with an estimated annual lease revenue of around $20mn. And the following year Forbes Ukraine ranked the 40-year-old native of the central Ukrainian city Kirovohrad as the country's 38th richest businessperson worth $166mn – the fastest riser on the list, and the least public.

Polishchuk's sudden emergence from obscurity put the spotlight on the sources of his wealth, and in particular widespread reports that his wife, Lilia Rizva, is the niece of Svetlana Medvedev, wife of Russian Prime Minister (and former president) Dmitry Medvedev. “The wife of Polishchuk is the niece of Dmitry Medvedev, and this explains the success of Viktor in business, who 10 years ago had nothing,” Andriy Levus, head of Ukraine's parliamentary sub-committee for national defence and security, wrote on his blog on May 29.

An investigation into Polishchuk by TV channel Espresso in April likewise claimed that Polishchuk and Medvedev are related, pointing out that both men's wives hail from the Poltava region in Ukraine.

Polishchuk and Rizva have neither denied nor confirmed the claims. Neither the TV investigation nor bne IntelliNews have managed to get any response from the reclusive Polishchuk or his businesses.

Polishchuk's only contact with the press was in March 2013, when he provided answers in writing to questions from Forbes Ukraine, as well as publishing his CV for the first time, which contained no indication of how he had accumulated funds so quickly. Neither the interview nor the CV contain any reference to the alleged Medvedev ties.

Given Polishchuk's reclusiveness, he bizarrely chose as press secretary the glamorous It-girl and journalist Alena Berezovska – known for her pro-Russian views and proximity to the family of Yanukovych, which only fuelled rumours of Polishchuk's Russian connections.

Berezovska declined to comment on Polishchuk and any Kremlin connections, having now herself moved to Moscow. “This was a forced move,” she told bne IntelliNews, on account of her pro-Russian leanings. She is currently on a Russian Orthodox pilgrimage in the Holy Land.

In 2014-15, Polishchuk also started to acquire banks, despite the chaos breaking over Ukraine that sparked the revolution which toppled Yanukovych and caused today's Russian-backed insurgency in the east. In 2014, Polishchuk bought the 69th largest lender Bank Mikhailivsky, apparently to boost consumer lending at his electronics stores. Then in March this year he was given the go-ahead to acquire All-Ukraine Development Bank (VBR), the 36th largest bank.

The move reignited controversy over Polishchuk's alleged secret connections, because VBR had been a cornerstone in the business empire of Oleksandr Yanukovych, son of the former president, who is now living in exile in Russia.

The National Bank of Ukraine had placed VBR under temporary administration in 2014 as part of asset recovery measures against the corrupt Yanukovych and his family. But in comments to the media, Konstantin Vorushilin, head of Ukraine's state deposit guarantee fund, which is responsible for resolving stricken banks, said that VBR was actually in relatively good financial health and could be safely reprivatised.

On June 2, the central bank supported Polishchuk as a transparent operator, praising Bank Mikhailvsky as a prime example of a bank that now clearly identified its beneficial owner. “Instead of 12 individuals who do not have significant influence on the bank's activity – each with a stake of less than 10% – we can see the key participant controlling a stake of 92.5%,” the central bank said in its presentation on “New requirements for ownership structure of banks”.

However, at the last minute regulators got cold feet over the deal. Vorushilin told the press on June 5 that it had now blocked Polishchuk's acquisition of VBR, because of the “lack of transparency about the origins of the funds and the identity of the final beneficiary of the potential investor". The same day, Polishchuk's holding company announced it was pulling out of the deal, citing force majeure.

bne IntelliNews analysed the ownership structure of Polishchuk's business empire to identify what had spooked the National Bank, and found a direct link to the 'extended family' of ousted former president Yanukovych in the form of Ruslan Tsyplakov, a businessman and close friend of the family, who raced cars in the same Team Ferrari Ukraine as Victor Yanukovych, the now deceased younger son of the former president.

The Seychelles company register is a closed book, but Rockshield Investments – together with sister companies Rockshield Alliance and Rockshield Management – since 2012 own a number of UK trading companies registered in London, at the infamous address of Tooley Street 122-126. bne Intellinews has previously investigated this address in connection with its hosting of the business empire of a Yanukovych confidante, the controversial Donetsk businessman and former MP Yury Ivanyuschenko.

Podemos LLP, another of the firms registered at the Tooley Street address, like Metal Union owned by Rockshield Alliance and Rockshield Management, holds a 22% stake in TOV Trio O, the Ukrainian holding company for the Gulliver shopping mall.

Journalists at investigative publication The Insider have previously cited anonymous market sources as saying that Polishchuk's Bank Mikhailivsky is also in fact controlled by Tsyplakov. The bank in response denied any links to Tsyplakov.

Tsyplakov's whereabouts are currently unknown and he could not therefore be contacted for a response. He reportedly left Ukraine for Russia together with the Yanukovych family when they fled in February 2014. In August 2014 he was quoted by newswires as denying reports that he had been arrested by Ukraine's security service, the SBU. Ukraine’s central bank wound up Tsyplakov's bank Pivdenkombank in December, and the Metal Union website has been taken down. 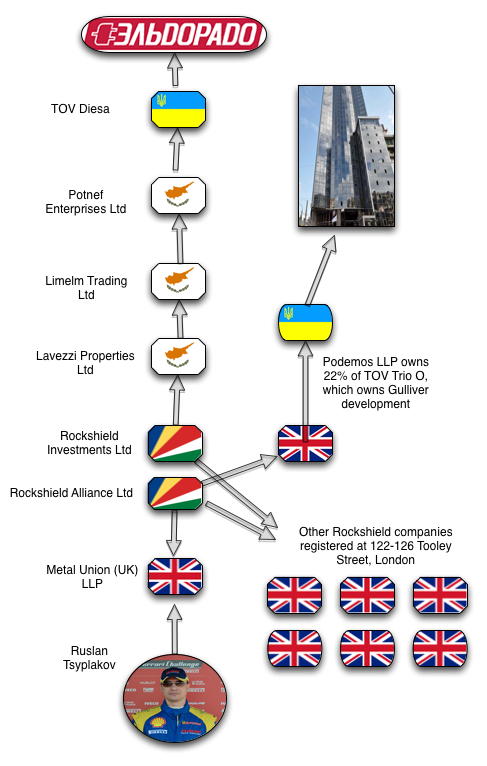 Polishchuk and his wife Rizva are also listed as business partners of a certain Yury Grib in one of the Eldorado/Tekhnopolis divisions, Tekhnobud-1. Tekhnobud-1 via various subsidiaries owns land plots for Eldorado logistics centres in Kyiv region, as well as a large trucking firm. Curiously, Ukraine's new state register of firms' final beneficiaries wrongly lists Grib as 'Gib'.

Grib, who could not be contacted for comment, is regarded as a trusted lieutenant of the influential pro-Kremlin Medvedchuk family. Grib became deputy head of Ukraine's tax service in 2004, after rising rapidly through the ranks of the customs service on the coat tails of Serhiy Medvedchuk, who headed Ukraine's customs service while his brother Viktor headed the presidential administration under Leonid Kuchma in 2001-2004.

Viktor Medvedchuk is the pro-Kremlin grey cardinal of Ukraine. His Ukrainian Choice party campaigned for Ukraine to join the Russia-led Eurasian Economic Union trade bloc, and Medvedchuk has acted as negotiator between the Kremlin-backed Donbas insurgents and Kyiv.