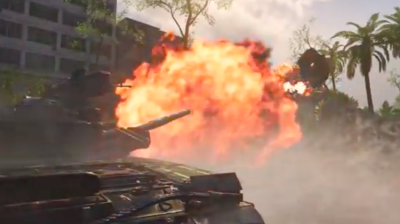 Wargaming is the developer of the cult games World of Tanks (pictured), World of Warships and World of Warplanes. / Wargaming
By bne IntelliNews June 15, 2022

The developer of the online military games Wargaming has announced the opening of two new studios in Belgrade and Warsaw as part of its restructuring.

In March, the developer of the cult games World of Tanks, World of Warships and World of Warplanes announced it was pulling out of Russia and Belarus and closing its studios in the two countries following the military invasion of Ukraine.

The company said in a press release that the two new studios will host up to 400 employees.

In Belgrade, the company plans to house both international and local talent across development and publishing disciplines. “Going forward, the office will also become an important relocation hub for Wargaming staff from multiple locations. The studio will focus on the World of Tanks and World of Warships franchises, providing key services and potential development of new products,” the company said.

Wargaming Warsaw will at first be home to a small publishing team, while further development plans will be decided as the restructuring process moves forward.

“Warsaw and Belgrade were logical choices for these new locations; both are fast developing technology sectors with enormous potential. We look forward to working closely with both cities’ IT communities to build best-in-class game development and publishing units. Wargaming continues to move forward with big plans for the future. The Belgrade and Warsaw locations will be essential for accomplishing our goals,” said Victor Kislyi, Wargaming CEO, according to the press release.

Poland is an important centre for game development in the Central and Eastern Europe region, and the Warsaw Stock Exchange (WSE) announced in 2021 it is the world leader in terms of the number of listed companies from the gaming sector. Meanwhile, the game development industry is growing fast in Belgrade, and is seen as having strong potential.

Wargaming, currently registered in Cyprus, was originally a Belarusian company and had maintained a major studio in the Belarusian capital Minsk.

The company also fired the creative director Sergey Burkatovskiy after he made a statement in support of the Russian invasion of Ukraine on Facebook. Burkatovskiy’s stance “categorically does not reflect the position of the company,” Wargaming told PC Gamer at the time.

Serbia to deploy drones to follow high-speed trains after stonings

Romanian crowdfunding platform SeedBlink helps Bulgarian startup Agriniser raise funds
3 days ago
Investments into Serbian startups soared more than 600% in 2021
3 days ago
Uzbekistan’s IT sector on fire and targeting the vast US market
6 days ago
EWDN: Yet another Ukrainian-founded unicorn: airSlate raises more than $50mn in the US
8 days ago
Serbia to deploy drones to follow high-speed trains after stonings
10 days ago