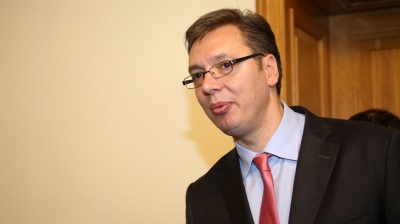 Serbian President Aleksandar Vucic has reiterated that Belgrade will not join sanctions on Russia, despite western pressure, as the deadline to strike an agreement on a new long-term gas supply deal with Russian approaches.

At a meeting with Russian President Vladimir Putin last November, Vucic agreed on a six-month extension of the existing gas supply deal. That enabled Serbia to continue importing gas at the previous price from Russia’s Gazprom — at a time when gas prices were rising fast on international markets and other countries from the region were paying several times more for their gas.

That extension is due to expire at the end of May, taking Vucic and his ruling Serbian Progressive Party (SNS) safely past the general, presidential and local elections that took place on April 3.

Discussions on the new gas deal are now underway, and were one of the subjects of Vucic’s telephone conversation with Putin three days after his election victory.

"Talks about the new contract need to be launched as soon as possible," said a statement from the Serbian presidency on April 6.

At the same time, as an EU candidate country Serbia is under pressure from European officials to join sanctions on Russia. The Serbian government has resisted, citing Serbia’s friendship with Russia, Moscow’s support in keeping Kosovo — which declared independence from Serbia in 2008 — out of the UN and other international institutions, and Russia’s refusal to impose sanctions in Serbia during the Balkan wars of the 1990s.

In a recent development, on April 20 members of the US Senate Foreign Relations Committee added to the appeals to Serbia to impose sanctions, in line with other European countries.

“Our message to President Vucic, someone I've known for a long time, was also a simple one. If Serbia really wants to be part of Europe, then it can't be on the outside of the U.S.-Europe sanctions against Russia. If it continues this outlier status of trying to play a game of neutrality, there isn't going to be an invitation from Europe,” senator Chris Murphy told CNN after the meeting, a transcript of the interview from his office said.

However, after a meeting with the senators, Vucic said that Serbia is dependent on Russian energy and that imposing sanctions on traditional allies in Moscow would be “disastrous” for Serbia.

Serbia imports most of its gas from Russia and Gazprom is the majority owner of its Banatski Dvor gas storage facility.

Vucic said when announcing Serbia’s initial decision not to join sanctions, immediately after Russia’s invasion of Ukraine, that sanctions decisions would be guided “solely by the protection of its citizens' vital economic and political interests”.

He made the same point again in an interview with the Financial Times in mid April when he said that Serbia will not jeopardise its national interests by joining the sanctions. “[W]e have our own side, Serbia’s interests,” he said.

"We have a sort of protection [from Russia]. What do [Western countries] want? Leave all our national interests because someone needs something for themselves?" he told the Financial Times.

Europe typically absorbs around 70% of Russia’s gas exports. Serbia’s talks with Russia are taking place at a time when other governments in the region are looking at ways to move away from dependence on Russian gas imports for fear gas revenues are being used to fund the Russian war machine.