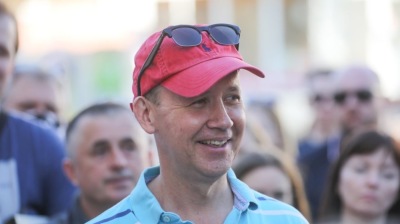 Valery Tsepkalo is out of the presidential race after the CEC invalidated half of his petition signatures / wiki
By bne IntelliNews July 1, 2020

Valery Tsepkalo, one of the three leading opposition candidates that want to run against Belarus President Alexander Lukashenko in the August 9 presidential elections, has been excluded from the race. The other two are in jail.

The Central Election Commission (CEC) confirmed that half of the 160,000 signatures submitted by former diplomat, businessman and one-time Lukashenko aide Tsepkalo have been invalidated. As he has less than the required 100,000 signatures his application has been rejected.

The regional offices of the CEC have also rejected thousands of signatures for ex-banker and jailed leading opposition candidate Viktor Babariko, who technically is still in the race. Under Belarusian law being in jail doesn't disqualify you from standing for president and competing in an election.

Popular YouTube blogger Sergey Tikhanovsky is also in jail and has already been excluded, but his wife Svetlana submitted her candidacy in his stead and is also technically still in the race.

However, according to the latest release by the CEC, both Babariko and Tikhanovskaya appear to have qualified for the election with just over 100,000 approved signatures each. That leaves six candidates in the race: two opposition figures, three pro-regime candidates and Lukashenko.

"Tsepkalo won’t be registered as a candidate. Tsikhanovski and key members of his team are arrested. Babariko and his son (head of his campaign) are in the KGB jail. Even if they are in the race, it will be hard to campaign. Lukashenko is clearly avoiding any risk,” tweeted Hanna Liubakova, a local journalist.

Anna Kanopatskaya also enjoyed the magical appearance of signatures. Another "opposition" candidate who called Babariko a paedophile and wanted life-long immunity for Lukashenko, Kanopatskaya had 146,000 signatures confirmed by the CEC despite the fact she only submitted 110,000 and her head of campaign says only 10,000 are real, reports Tadeusz Giczan, an academic following Belarus.

The CEC accepted seven applications to run in the race, which has approved the following number of signatures.