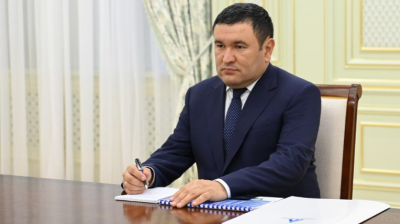 Uzbekistan has poured cold water on Vladimir Putin’s proposal for the creation of a "natural gas union" with Russia and Kazakhstan.

Many analysts will take the unmistakably negative response as another sign that Russia’s war against Ukraine has caused a growing fissure between Moscow and the former Soviet republics of Central Asia. The Kremlin reacted somewhat angrily to reports of the Uzbek rejection on December 8, stating that the gas union would not involve imposing “political terms” on Uzbekistan.

Putin proposed creating the gas union on November 28 during talks with Kazakh President Kassym-Jomart Tokayev in Moscow, where Tokayev headed on his first official trip abroad as the re-elected Kazakh leader.

Kremlin spokesman Dmitry Peskov explained at the time that the mechanism would be used to ship natural gas between Russia, Kazakhstan and Uzbekistan and other nations, including China. The deal would help the Central Asian countries ensure supplies during peak demand. For instance, there are parts of northern Kazakhstan that lie beyond the Kazakh gas pipeline system. Under the union, neighbouring Russia could commit to taking care of the region’s needs. But given the Ukraine experience and Europe’s decision to back away from Russian hydrocarbon provision, there is an increasing wariness among populations of ex-Soviet states when it comes to relying on Russia to meet the provision of strategic needs.

Uzbek Energy Minister Jorabek Mirzamahmudov said in an interview with the Kun.uz news website published on December 7 that his country would not give up its national interests in return for supplies of natural gas.

"Signing a gas agreement with Russia does not mean an alliance or union ... It would be a technical contract," Mirzamahmudov, made energy minister in October, stated.

"We will never compromise our national interests. Even if we [agree to receive natural gas from Russia], we will proceed via commercial sales contracts. We will not allow any political conditions to be imposed in return."

TASS reported Kremlin spokesman Peskov as claiming on December 8 that Reuters had published a misleading report on the gas union proposal, saying: "Reuters gave false information, misinterpreted words. We know what was said. Nobody is talking about gas in exchange for political concessions. This is not being discussed in the context of the idea of creating this union."

Kazakhstan has yet to back or reject the idea of the gas union, with officials saying only that the concept would be studied.

The Uzbek standpoint on the proposed gas union will be felt even more keenly in Moscow right now with multiple reports each day of acute winter shortages of gas plaguing Uzbekistan. The country lately froze all its gas exports as officials strived to redirect limited domestic gas resources to satisfy domestic needs.

Yuri Ushakov, foreign policy advisor to Putin, told reporters on December 8 that the idea of a common regional gas market would be discussed on December 9 at a Kyrgyzstan summit of the Eurasian Economic Union (EEU), Reuters reported. Putin was set to attend the Bishkek gathering.

Armenia, Belarus, Kazakhstan, Kyrgyzstan and Russia make up the EEU bloc. Ushakov said Uzbekistan's prime minister was set to attend the summit. 24.kg reported on December 8 that a planned December 10 state visit to Kyrgyzstan to be paid by Uzbek President Shavkat Mirziyoyev has been postponed. It said the reason for the postponement was not specified.

Russian budget deficit soars in January, full year deficit could double to over 6% of GDP
IMF issues Russian economic growth outlook that is more optimistic than Bank of Russia's
Poland’s economy expands 4.9% in 2022