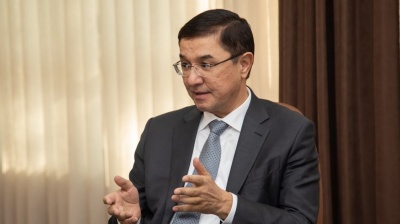 Uzbekistan's Deputy Prime Minister and Finance Minister Jamshid Kuchkarov at a briefing with international journalists in Tashkent.
By Clare Nuttall in Tashkent December 4, 2019

Uzbekistan is considering fundraising plans for the coming years which could include issuing a eurobond in the local currency, the soum, top finance ministry officials in Tashkent have said.

Uzbekistan made its debut on the international bond market this February, issuing a $1bn sovereign eurobond that was heavily oversubscribed. Final books stood at $3.8bn with around 150 institutional investor orders, as reported at the time.

The bond issue brought in large numbers of international institutional investors, with UK investors accounting for 39% and 32% of the five-year and 10-year tranches respectively, while US investors made up 23% and 31%, and continental European investors another 32% and 27% respectively. The successful bond issue will pave the way for regular debt sales, with another eurobond to follow possibly as soon as 2020, Uzbek officials said at the time.

At a briefing with international journalists in Tashkent on November 14, Deputy Prime Minister and Finance Minister Jamshid Kuchkarov said that Uzbekistan might go ahead with another eurobond issue as soon as next year, noting the need for funding for healthcare, infrastructure and water supply projects, for example, as Tashkent pushes ahead with reforms and investments. Any issue would naturally depend on market conditions.

“We would be very happy to issue a bond in the local currency,” Kuchkarov added, though he admitted it was not clear how high the demand for a soum eurobond would be.

Deputy Finance Minister Odilbek Isakov described a soum-denominated eurobond as “a possibility”, adding: “I don’t think there will be large demand for a soum eurobond versus the dollar [eurobond], but it could be an add-on.”

In mid-2018, the IFC, part of the World Bank Group, launched the first ever international Uzbek soum-denominated bonds — Samarkand bonds — on the London Stock Exchange. The bonds were admitted to the LSE’s main market on June 20, with the LSE commenting that the "landmark bond issuance … paves the way for the opening of the global Samarkand bond market to support financing of companies from Uzbekistan while raising the profile of the Uzbek soum internationally.”

According to officials in Tashkent, the Asian Development Bank (ADB) is also planning to issue a soum bond in the near future.

Uzbekistan’s debt-to-GDP level is currently quite low at around 23.6% as of last year, while external debt was around 23.5% in the first half of this year, according to Isakov, who expects this to increase to around 25% by the end of the year. As GDP is growing there is scope to increase debt, but finance ministry officials were cautious when it comes to new borrowing, and there are plans to set a 50%-of-GDP cap on debt.

However, raising at least some debt internationally would help the government fund its extensive reform plans. The government aims to modernise and reform state-owned enterprises (SOEs), banks and infrastructure and therefore “we need to import capital in the foreseeable future,” said Isakov. “It’s therefore fair to assume Uzbekistan will continue to be a net borrower on an annual basis.”

At the same time, plans for a major overhaul of the capital market are being drawn up and should be completed by the end of the year, with the aim of turning the Tashkent Stock Exchange into an effective tool to channel funds into companies, including soon-to-be-privatised SOEs.

Another option being considered is public-private partnerships (PPPs). A PPP agency was set up in 2018 on the orders of the president, and a PPP law was signed off in May. Isakov referenced the Scaling Solar project Uzbekistan is working on with the IFC which, he says, “is one example of how PPP is working and I think there will be many more to come … my colleagues are discussing roads, hospitals, potentially schools and a few other areas where we can use private sector money.”

At the same time, wide-reaching tax reforms have been initiated that should both increase revenues and reduce the burden on legitimate businesses. This saw the elimination of the turnover tax, a reduction in both income and corporate tax, and changes to the VAT regime that have seen the number of businesses registered to pay VAT soar from just 7,000 to 80,000.

First Deputy Minister of Finance Timur Ishmetov described tax reform as “one of the most important steps taken in the economic sphere”. Summing up the aims of the reforms, Ishmetov said the government was seeking to broaden the tax base and increase incentives for individuals and businesses to come out of the grey economy and pay their taxes.

From now on, said Kuchkarov, “legal business will be much more fruitful than illegal business”. And once all the changes are in place, the aim is to keep things stable so as to have more predictability for business.