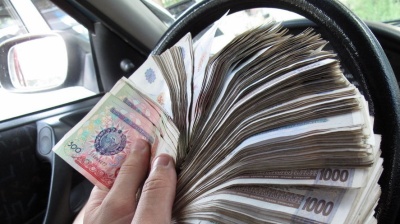 Banks in Uzbekistan have introduced restrictions on foreign currency exchange operations as the country experiences an acute shortage of dollar and euro bills.

Workers at several banks in Tashkent confirmed to Eurasianet and other outlets in Uzbekistan on October 14 that individuals seeking to exchange money are being limited to only $500 daily.

Local news outlet Podbrobno cited central bank representatives as saying that there were no grounds for concern and that “the temporary shortage of foreign currency in cash may be associated with logistical issues at local branches of commercial banks.”

Officials added in their remarks to Podbrobno, however, that the “current geopolitical situation” has provoked a sharp increase in the volume of cross-border money transfers, which has in turn intensified the demand for hard currency.

The allusion to geopolitics was a reference to Russia’s invasion of Ukraine. Large swathes of the international community responded to that military campaign with a spate of sanctions, including some affecting the ability of Russians to perform international cash transactions.

Central Asian countries have since that time been seen as a good way for people in Russia to get their hands on dollars and other foreign currencies.

Concerns about shortages of foreign currency in Uzbekistan have been circulating since the early days of the war in Ukraine. In March, the head of the central bank, Mamarizo Nurmuratov, offered reassurances that no crisis was looming and that the country had enough foreign cash to meet demand for exchange transactions for at least three to four months.

Introducing currency restrictions would be a regressive step for Uzbekistan, he said, in light of ongoing attempts to contain inflation.

Not all banks have warned of needing to impose currency restrictions. An employee at Sanoat Qurilish Bank, one of the country’s largest lenders, told Eurasianet that they have no limit in place at present on how many dollars clients can buy.

Bank customers tell a different story. They say that restriction have to all intents and purposes been in place for several weeks. Some bank branches have declined to provide customers more than $500 since August, although head offices typically have no such restrictions.

Limits on buying and selling currency in banks has traditionally driven people to rely on black market traders, who usually have greenbacks in abundance.