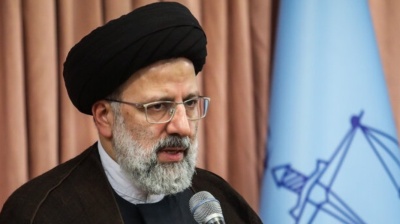 The attack came roughly a week before the scheduled swearing in of hardliner Ebrahim Raisi as Iran's next president. / Majid Haghdoust.
By bne IntelIiNews August 1, 2021

The US, UK and Israel have said that they believe Iran carried out an attack on an Israeli-managed petroleum product tanker off the coast of Oman on July 29 that killed a Briton and a Romanian.

Iran earlier on August 1 denied it was involved in the incident. However, the previous day, an Iranian government Arabic-language television station, Al Alam TV, quoted unnamed sources as saying that the attack was made in revenge for an unspecified alleged Israeli attack on an airport in Syria, an ally of Iran's.

"Upon review of the available information, we are confident that Iran conducted this attack, which killed two innocent people, using one-way explosive UAVs [unmanned aerial vehicles]," US Secretary of State Antony Blinken said in a statement. He added that there was "no justification" for the attack.

"We are working with our partners to consider our next steps and consulting with governments inside the region and beyond on an appropriate response, which will be forthcoming," Blinken said.

The incident occurred roughly a week before the August 5 inauguration of hardline cleric Ebrahim Raisi as Iran’s next president.

British Foreign Secretary Dominic Raab said on August 1 that UK analysis concluded it was highly probable that Iran used one or more drones to carry out the "unlawful and callous" attack on the tanker. "We believe this attack was deliberate, targeted, and a clear violation of international law by Iran," he said. The UK was working with international partners on a "concerted response," he also stated.

The attacked tanker was the Mercer Street, a Liberian-flagged, Japanese-owned ship managed by Israeli-owned Zodiac Maritime.

The US Navy was escorting the tanker with the USS Ronald Reagan aircraft carrier.

Speaking during a weekly meeting of his cabinet on August 1, Israeli Prime Minister Naftali Bennett said: "I declare unequivocally: Iran is the one that carried out the attack on the ship."

Iranian Foreign Ministry spokesman Saeed Khatibzadeh told a weekly news conference on August 1 that the "Zionist regime [Israel] has created insecurity, terror and violence... These accusations about Iran's involvement are condemned by Tehran".

"Such accusations are meant by Israel to divert attention from facts and are baseless," Khatibzadeh added.

Analysts widely suspect Iran and Israel are involved in an undeclared shadow war in which they carry out attacks on each other's vessels. This war appears to be escalating, with the fact that there were human casualties as a result of the latest attack marking a possible turning point for the worse. Iran has also accused Israel of mounting covert operations to assassinate its nuclear scientists and destroy Iranian nuclear development facilities.

In July, a containership recently sold by the Ofer family was attacked in the Indian Ocean.

In April, an Israel-owned ro-ro carrier was attacked off Fujairah, while Israel was also accused of a mining an Iranian ship Saviz.

The Wall Street Journal reported in March that Israel has targeted at least 12 ships bound for Syria, most of them transporting Iranian oil, with mines and other weapons.

BREAKING: Putin signs off annexation of four Ukrainian regions
11 minutes ago
Kremlin preparing for a protracted conflict by putting Russian economy onto a war footing
4 hours ago
Hungary’s forint slides to new low after central bank ends tightening cycle
7 hours ago
Slovak ministers criticise Czech border controls
7 hours ago
Might Trussonomics be a branch of Erdoganomics?
12 hours ago