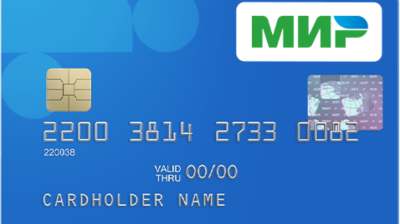 Russia has set up its own Mir payment system / wiki
By bne IntelliNews December 11, 2018

The US Special Representative for Ukraine Negotiations, Ambassador Kurt Volker threatened that the United States and its Western allies would take the “nuclear option” of cutting Russia off from the SWIFT international payments system in retaliation for Russian aggression in the shared waters of the Sea of Azov on December 6.

This is not the first time that the west has threatened to try and isolate Russia by cutting its payment system off from the international SWIFT payments system and Russia has already built its own Mir payment system in anticipation of the potential move. The first Mir payment cards were issued in December 2015.

Cutting Russia off from SWIFT would represent a significant escalation in the war of words between Moscow and the West and is a nuclear option. The CBR is clearly taking the threat seriously and last week warned Russian bank to have a plan B for dealing with payments just in case.

The CBR is clearly anticipating more sanctions in the New Year and cancelled its currency purchases at the end of the summer to build up cash reserves. It also prophylactically hiked interest rates in September in anticipation of new “crushing” sanctions that could undermine the stability of the ruble. The CBR surprised analysts by front-loading the monetary policy rate with preventive 25bp hike to 7.5% in November.

However, Volker comments are not official policy and probably represent only another salvo by the west in the war of words between Russia and the west. Volker said the West is considering a number of options to prevent Russia from asserting any more "unilateral control" in the shared waters of the Azov Sea, Ukrainian news agency Unian reported on December 6.

Cutting Russia's banks off SWIFT sanctions would be amongst the most devastating sanctions the west could impose on Russia but has only been mentioned a handful of times since 2014. Cutting Russia off from SWIFT would be tantamount to an "act of war", the head of Russia's second-largest bank VTB Andrei Kostin once said.

The Russian payment card Mir was launched under the umbrella of National System of Payment Cards (NSPK) and negotiating an issue of co-badged cards Mir-Mastercard, in 2017 to work in parallel with the existing international system.

Although initially resisted by the banks, the Mir payment card is now functioning and 176 local lenders adopted the system as of January 2017, with a total of 97% ATMs in Russia and over 75% of payment terminals accepting the card. Russia is already ready to cope with being cut off from SWIFT, but the move would be a major inconvenience for Russian card holders travelling abroad.

However, so far the EU and the US have failed to pass any new sanctions against Russia after the Azov Sea incident. Europe and the US seem split on the issue. German Chancellor Angela Merkel said last week that there would be no new sanctions on Russia over the Sea of Azov incident and Berlin has been working hard to deescalate tensions. Volker’s statements are likely also aimed at reassuring Ukrainian interlocutors, than an actual threat at this stage.

"People refer to it as a nuclear option," Volker said. "It would have costs for everybody involved. Big costs for Russia, but big costs for allies as well. Ultimately, we have to keep it on the table as a possibility because we just can't continue to see Russia launch further steps of aggression in its neighbourhood like this."

In the meantime previous reports indicated that the US Congress is not expected to pass legislation imposing new sanctions on Russia before the end of 2018, as other urgent issues are cluttering the agenda after the recent mid-term elections.

The White House showed some minor sanction activity after the mid-term elections, making a routine update to the existing measures under the Countering America’s Adversaries Through Sanctions Act (CAATSA) with no serious new consequences to Russian economy.