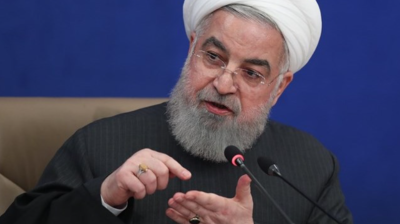 Rouhani: unhappy his attempts to seal a nuclear deal revival in the lame duck days of his presidency have been thwarted by the regime. / Fars News Agency.
By bne IntelIiNews July 14, 2021

The US said on July 14 that it was permitting Iran to use funds frozen by sanctions to settle debts in South Korea and Japan. Analysts will assess the move as an attempt to sweeten the path for Tehran towards an agreement between the Iranians, Washington and other major powers that would relaunch the 2015 nuclear deal. Such a revival of the pact, known as the JCPOA, would see the US lift a range of heavy sanctions on Iranian economic sectors including oil, banking, shipping and automaking.

Separately, Iran’s pragmatic moderate President Hassan Rouhani, who will hand over the presidency to hardline cleric Ebrahim Raisi on August 5, on July 14 implicitly criticised the Iranian regime’s top decision makers—who have the final say on all decisions made by the elected government—for "not allowing" his administration to reinstate the nuclear deal during the final months of its term in office.

As things stand—with the US not signed up to the JCPOA given the unilateral withdrawal made by the Trump administration in spring 2018 and Iran brazenly breaching the agreement by accelerating the development of its nuclear work in a direction that could conceivably eventually give it the means to construct a nuclear weapon—companies that deal with Iranian bank accounts remain exposed to US secondary sanctions unless the Biden administration grants a waiver.

The US State Department said that it has been letting Japanese and South Korean companies receive payments from US-targeted Iranian accounts to pay for exports shipped before former president Donald Trump's officials started enforcing their toughest sanctions on Iran in 2019. Secretary of State Antony Blinken signed an earlier waiver and has extended it for 90 days as "these repayment transactions can sometimes be time-consuming," a State Department spokesperson said, adding: "To be clear: The waiver does not allow for the transfer of any funds to Iran."

South Korea and to a lesser extent Japan, both major tech exporters, hold billions of dollars in assets from Iran that have been stuck since Trump's sanctions, AFP noted. South Korea and Japan previously had large presences in the Iranian technology and automotive markets, with brands like KIA and Sony making major impacts via Iranian counterparts.

Outlining his disappointment that his administration has not been permitted by the most senior Iranian officials to attempt to make the final moves in sealing a revival of the nuclear deal—an opportunity that opened up when Joe Biden arrived in the Oval Office with the intention of dismantling his predecessor’s Iran policy—Rouhani, as reported by official Iranian news agency IRNA, said: "They took away the opportunity to reach an agreement from this government. We deeply regret missing this opportunity."

Supreme Leader Ayatollah Ali Khamenei has the final say on all matters of state in Iran.

Like Khamenei, Raisi has backed the indirect talks between Tehran and Washington aimed at restoring US and Iranian support and full compliance with the JCPOA. However, restoring the nuclear deal will be politically awkward for Raisi as Iran’s hardliners six years ago opposed the Rouhani deal with the US, UK, France, Germany, Russia and China that brought the accord into existence.

A sixth round of nuclear talks in Vienna aimed at reviving the JCPOA adjourned on June 20. The next round of the talks has yet to be scheduled, but the US has said there is no deadline for setting a date.

Russia has said an agreement to restore the nuclear deal is 90% complete, but Western officials have cautioned that significant differences between Tehran and Washington must be overcome.

Two senior Iranian officials told Reuters this week that president-elect Raisi planned to adopt "a harder line" in the talks after taking office, adding that the next round might resume in late September or early October.

One official said many members of Iran's nuclear team might be replaced with hardline officials, but top nuclear negotiator Abbas Araqchi would stay "at least for a while".

The second official said Raisi planned to show "less flexibility and demand more concessions" from Washington such as keeping a chain of advanced uranium enrichment centrifuges in place and insisting on the removal of human rights and terrorism-related US sanctions.

However, Raisi—already widely disliked among many Iranians as the regime arranged for him to contest a presidential election that barred the participation of leading moderates, giving him an easy path to victory—will be wary of not finding a way to restart the JCPOA as a continuation of US sanctions could plunge Iran into renewed economic difficulties that would cause additional tension in Iranian society.

Despite the feeling that Raisi in the final analysis will opt to sign up to a 'Nuclear Deal 2', hardline parliamentarians in Iran continue to present theatrical distaste for the Rouhani administration efforts to resurrect the JCPOA. On July 13, Iran's Foreign Minister Mohammad Javad Zarif submitted to parliament what was seen as his final report on the status of the talks over the revival of the accord. He earned the ire of hardliners as, in the 213-page document, he declared Iran was "only one step away" from getting the deal back on track. The hardliners took the line that the report was a "justification" for a series of "failures."

When Trump walked out on the nuclear deal, even though Iran remained at that point in full compliance with it, he boosted the hardline camp as at the time of the signing of the JCPOA it warned that America can never be trusted.