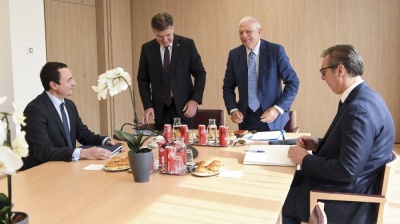 Senior US and EU officials will visit Kosovo and Serbia in the coming days in a diplomatic offensive following the failed meeting in Brussels between the two countries’ leaders.

Serbian President Aleksandar Vucic met Kosovo’s Prime Minister Albin Kurti on August 18 in Brussels, but the meeting convened following increased tension in northern Kosovo ended without agreement. Tensions were sparked by Pristina’s decision not to recognise Serbian ID documents and car number plates. Kosovo declared independence from Serbia in 2008, but is not recognised by Belgrade as a separate state.

Kosovo’s Telegrafi reported that US Deputy Assistant Secretary of State for Europe and Eurasia Gabriel Escobar will visit the two capitals this week.

"Escobar is traveling to Pristina and Belgrade to support the dialogue," a spokesperson from the State Department told the Telegrafi.

EU envoy for Serbia and Kosovo, Miroslav Lajcak, will visit Kosovo on August 24, Telegrafi said citing sources within the EU.

According to Serbian agency Tanjug, Lajcak will be in Belgrade on August 25.

The two delegates from the US and the EU will also meet representatives of political parties.

EU High Representative Josep Borrell said following the latest Brussels talks that the efforts will continue and the two sides should find a solution by September 1.

“The international community does not want to see renewed tensions in the coming period, and the parties will be fully responsible for any escalation on the ground,” the high representative said.

Ukraine anti-corruption officers raid home of Kolomoisky
2 hours ago
Bulgaria starts construction of gas link with Serbia
11 hours ago
RBI's 2022 profits soar to €3.6bn, with Russian operations representing more than half
1 day ago
Hawkish Iran helped stop larger Azerbaijani attacks says Armenia
1 day ago
Only Hungary and Russia heading for recession in 2023 as Emerging Europe shows its resilience
1 day ago