US DFC signs agreement on starting activities in Serbia 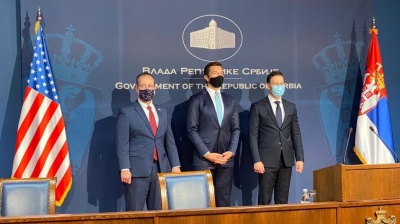 Serbian Finance Minister Sinisa Mali and US ambassador to Serbia Anthony Godfrey signed an investment incentive agreement, which is a pre-requirement for the US International Development Finance Corporation (DFC) to start its activities in Serbia, on January 21, said statements from the Serbian government and the US embassy.

The DFC opened its office in Serbia in September 2020, as agreed during a summit between Serbian President Aleksandar Vucic and Kosovan Prime Minister Avdullah Hoti in Washington earlier in the month,

“This agreement is important, because it confirms that the Washington agreement is still being implemented. We are thereby continuing what was agreed in Washington," Mali said following the signing of the agreement.

The minister said that the goal was for a guarantee scheme for Serbian companies, worth $1bn, to be agreed with the DFC by the end of the first quarter of 2021 and to make it available to Serbian micro, small and medium enterprises by mid-2021.

“Not only will these credits be favourable, but we will also try to have them issued for a period longer than 10 years,” Mali said.

“DFC is pleased to have the [Investment Incentive Agreement] between Serbia and the United States in place, solidifying the US commitment to expand the financial tools available for the development of Serbia’s economy, especially its private sector,” said Godfrey.

“We see great potential for DFC to help mobilise investments that create jobs and support development for the people of Serbia,” commented John Jovanovic, the DFC’s deputy vice president and managing director for the Western Balkans and Aegean.

Furniture manufacturer Novi stil from Jagodina in Serbia has received a loan to buy three new machines from the European Bank for Reconstruction and Development (EBRD) and the EU, the EBRD announced ... more

A regulatory framework setting the pre-conditions for launching public bidding for the allocation of 5G frequencies in Serbia exists, stated Vladana Radisavljevic Djordjevic, the head of the Group ... more

The Serbian government plans to carry out 35 projects worth €177.6mn to increase the availability of financing for innovative companies, development of digital infrastructure and investments in ... more