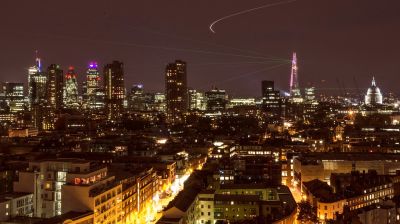 Uralsib's London business vanishes to stardust after sale to brokerage. / Photo by Alexander Kachkaev/CC
By Jason Corcoran in London April 11, 2017

The Uralsib name in London has gone up in a puff of smoke after the Russian lender sold its subsidiary for an undisclosed sum to an emerging markets brokerage firm.

bne IntelliNews had reported exclusively in October last year that the parent lender had put its London business up for sale, effectively uprooting the mysticism-laden legacy of its ex-billionaire founder Nikolai Tsvetkov.

As part of the sale, the Uralsib brand – synonymous with the unconventional world of Tsvetkov – has been dropped in favour of ITI Capital. The deal was co-financed by Da Vinci Capital, a private equity manager based in Moscow headed by Oleg Jelezko, who made a mint punting on the RTS before its merger with Micex.

According to its website, Guernsey-based ITI Group is a brokerage firm focusing on technology and algorithmic trading, and providing “selected buy-side products” in the partnership with ITI Funds. As part of the deal, filings show that Jelezko will become a director at ITI Capital.

Pavel Naumenko, CEO of ITI Group, said the acquisition of a fully licensed UK broker is a huge step for his firm. “It cements our commitment to taking a leading position among brokers with a strong Russian and international presence,” he said.

Naumenko is an old Moscow banking hand who worked at Promsvyazbank, Sberbank, Merill Lynch and Renaisance Capital, where he is likely to have known Jelezko.

Uralsib veteran John Lewin surprisingly retains his role as chief executive of the London operation after the buyout. His team has been pared back to the bone by a Moscow parent anxious to cut costs. “We see robust synergies between ITI Group and Uralsib’s core products,” Lewin said in a statement.

The Moscow parent Uralsib, which has ties to President Vladimir Putin, stopped its English-language research daily last year and discontinued some of its Russian-language products, sources close to the bank told bne IntelliNews in October.  Most analysts and production staff, who were based in Moscow, were laid off.

Uralsib, once Russia’s fifth-largest bank by assets, has been roiled by mismanagement, the collapse in commodity prices and the fallout from sanctions against the Kremlin’s actions in Ukraine. Founder Tsvetkov surrendered control in November 2015 as part of a bailout, after a year of the bank being on the edge of bankruptcy and under threat of having its licence revoked.

“The writing has been on the wall for the UK business since the bank changed hands,” a source close to Uralsib told bne IntelliNews. “The bank has a bunch of guys doing virtually nothing for the past two years but sit around in prime London office space.”

The bank had previously employed 25 people in its London office and was the Russian partner to prestigious New York brokerage Auerbach Grayson. The lease of its offices on the 33rd floor of the prestigious Tower 42 (formerly the NatWest Tower) is understood to cost around £4mn a year to maintain and is expected to be far too extravagant for the new owners, insiders said.

Tsvetkov, a former Soviet Air Force officer who is a fan of mysticism, paid the sky-high rent because “the building looks like a rocket ship to the stars”, a former staffer told bne IntelliNews. The office, which takes up the south-facing side of the building with a panoramic view over the River Thames towards the Houses of Parliament, was even decorated with space motifs. “It is the ideal feng shui location,” said the former exec.

As part of Uralsib’s rescue – or “sanitation” as it’s known in Russian – the state extended an RUB81bn ($1.3bn) lifeline to the bank and allowed entrepreneur Vladimir Kogan, a close ally of Putin, to take a 82% stake.

Meanwhile, Tsvetkov was left with a minority holding and is believed to have withdrawn from the business to focus on his spirituality and personal research. In a profile last year, bne IntelliNews revealed how revelations and mysticism were stock-in-trade of his management style.