UPDATED: Tensions between Russia and Ukraine flare after Russian navy vessel rams a Ukrainian tug in the Sea of Azov 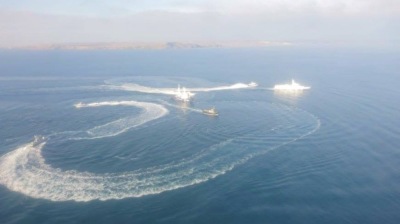 Tensions between Russia and Ukraine flared on November 25 after a Russian navy vessel rammed a Ukrainian tug in the Sea of Azov
By Ben Aris in Berlin November 25, 2018

Tensions between Russia and Ukraine flared on November 25 after a Russian navy vessel rammed a Ukrainian tug in the Sea of Azov and Russia imposed a de facto naval blockage by blocking passage under its controversial Kerch bridge.

Russia claims that three Ukrainian warships “intruded into Russian territorial waters” surrounding the annexed Crimean peninsula and closed off access to shipping, a source in the transport authorities of the South Federal District sad.

"The Kerch-Yenikale Canal has been closed," the source told TASS, noting that this comes "amid fears of provocations" and earlier political statements in the Ukrainian media.

Late in the day Russia seized all three Ukrainian vessels including their 36 crew and there were reports of shots fired with three Ukrainian sailors receiving minor injuries in the exchange, according to Russia’s Federal Security Service (FSB).

"The Ukrainian Navy’s vessels the Berdyansk, the Nikopol and the Yany Kapu, which violated Russia’s state border this morning, made another attempt of committing illegal activities in Russia’s territorial sea at 19:00 Moscow time on November 25," the FSB said in a statement, cited by Tass. "They did not respond to legitimate demands by the ships and boats of Russia’s FSB Border Guard Service escorting them to stop immediately and performed dangerous manoeuvres."

According to the FSB, "weapons were used to force the Ukrainian warships to stop… Three wounded military servicemen of the Ukrainian armed forces received medical assistance," the FSB said, adding that there was no threat to their lives. All three vessels have been escorted to the port at Kerch.

President Petro Poroshenko went on the air in the evening and declared 60 days of martial law that will give him emergency powers to act and deal with the crisis. Martial law, which has not be imposed in response to the previous acts of aggression, also means that the presidential elections in March next year could be delayed or cancelled.

Ukraine’s National Security and Defence Council held an emergency meeting in the evening of November 25 to discuss the imposition of martial law in that country and the Verkhovna Rada, Ukraine’s parliament, is due to meet today to vote on the matter.

Poroshenko stressed that the imposition of martial law did not mean mass mobilisation nor would there be an escalation in fighting in the disputed Donbas region.

The Ukrainian armed forces have been put on full combat alert by the decision of the chief of the country’s General Staff, the press service of Ukraine’s Defence Ministry reported on Monday.

Both Russia and Ukraine called for an emergency UN Security Council meeting to be held today in New York.

"In connection with the dangerous developments in the Sea of Azov and subsequent events, Russia requested an urgent convocation of an open Security Council meeting in the morning of November 26 on the maintaining international peace and security agenda item," Russia’s First Deputy Permanent Representative to the UN Dmitry Polyansky told reporters in the evening of November 25. "The meeting is tentatively scheduled for 19:00 Moscow time [on November 26]."

The incident started on Sunday morning when the three Ukrainian “warships” entered Russia’s territorial waters and began to carry out “dangerous manoeuvres,” the Russian press reported. The vessels were identified as two small armoured boats, Berdyansk and Nikopol, and tugboat Krasnoperekopsk, which were reportedly sailing from the ports of Odessa to Mariupol.

"This morning at around 7:00 a.m. Moscow Time three ships of Ukraine’s Navy violated Articles 19 and 21 of the United Nations Convention on the Law of the Sea, which define the right of a coastal state to ensure maritime security, crossed the Russian state border and illegally entered the temporarily closed waters of the Russian territorial sea," an official statement said.

The Russian frigates on patrol in the sea engaged with the Ukrainian ships and there was a collision. Reports on who rammed who vary as both sides are claiming that their ship was rammed by the other.

"The Don coast guard ship [of Russia] rammed our tugboat, and as a result the vessel’s main engine, plating and open railing were damaged and a life float was lost," the Ukrainian Navy said in a statement.

The Ukrainian Navy argued that the Russian coast guard carried out “acts of aggression” against Ukraine’s ships that “were engaged in planned relocation from the port of Odesa to the port of Mariupol of the Sea of Azov,” it said, reports Interfax Ukraine.

"Today, November 25, the Ukrainian Navy's two small armoured artillery boats and a tugboat were carrying out a planned transfer from the port of Odesa to the port of Mariupol of the Sea of Azov. Notification about transfer plans was performed in advance in accordance with international rules to ensure the safety of shipping. However, contrary to the UN Convention on the Law of the Sea and the Treaty between Ukraine and the Russian Federation on Cooperation in the Use of the Sea of Azov and the Kerch Strait, Russian ships – Sobol class patrol boats, the Don coast guard ship, Mangust-class patrol boats, and the Suzdalets corvette – carried out openly aggressive actions against the ships of the Ukrainian Navy," the Ukrainian Navy said in a statement on Facebook on the morning of November 25, as cited by Interfax Ukraine.

The Russian press reported that Ukraine’s ships had turned off their transponders, making them invisible to radar.

"They are not seen, they are not providing information to the centre for control of maritime traffic,” the transport authorities of the South Federal District said.

Who controls the water around Crimea is clearly in dispute, as neither Ukraine nor the international community acknowledge Russia’s right to be in Crimea following its annexation in 2014.

Ukraine has clear rights to the northwestern corner of the Sea of Azov as international maritime law gives sovereign rights to the first 10km into a sea from a country’s coast. As the Sea of Azov is a sea then usually after this the coastal band further out would be international waters that are shared by all nations, but as the “sea” is so small, the Ukrainian sovereign controlled waters go up to the Russian section and there is a border in the middle of the sea between the two countries.

What confuses the issue is Russia’s annexation of Crimea, as in practice this means the entire Kerch straights are – as far as Russia is concerned – Russian territorial waters. This gives Russia – from the Russian perspective – the right to control the Kerch straights and close them off to Ukrainian shipping. From the Ukrainian perspective, its shipping is guaranteed a right of passage by the 2003 agreement.

Technically a navy blockade is an act of war, however, the Russians will claim that they have a sovereign right to close access to their territorial waters if they choose. The issue will turn on the legitimacy of Russia’s claim to Crimea – something Russia will insist on, but, which no one else in the international community will acknowledge.

The ports on the Sea of Azov are crucial to Ukraine as they serve much of its heavy industry that is in the hinterland including the war ravaged Donbas region, which is currently under the control of Moscow-backed separatists. However, Ukraine continues to earn significant export revenues from metal exports that are shipped via the ports in the Sea of Azov.

Tensions in the Sea of Azov have been growing steadily all year as it is a new front that has opened up since the completion of the Kerch bridge earlier this year.

Ukraine is very dependent on the Sea of Azov to get its raw material exports – mainly steel – to market, but the bridge has been a Russian tool to limit or control the flow of goods through the sea to international markets. The low clearance of the bridge means that the biggest Ukrainian ships can no longer access their berths at Ukraine’s main ports and that has impacted Ukrainian trade.

In addition, there is a tendency for headline-catching military conflagrations to flare up ahead of big international events. This week world leaders will meet in Buenos Aries in Argentina for the G20 summit, which has already displaced the G7 meetings in 2008 as the most important global forum.

The naval show down in the Sea of Azov is a boon to Ukrainian President Petro Poroshenko as it clearly defines the Russo-Ukrainian issue in the eyes of the international community.

“This is bad. Going into to the G20 this clearly casts Russia as an aggressor but it leaves the international diplomatic community no option but to condemn Russia at the G20. This comes at a time when it was clear that Europe was clearly trying to find a way to make some sort of deal with Putin as they realise they need Russia’s help in Syria, Turkey and the Middle East. That can’t happen now,” a European diplomatic source told bne IntelliNews.