Russian-backed rebel fighters in eastern Ukraine's Donbas region are close to encircling a key town that their commanders are intent on taking ahead of further ceasefire talks in Belarus, reports said on February 10.

The small town of Debaltseve, the most eastward point held by Ukrainian forces, is located at a strategically important rail and road junction, forming a Ukrainian government salient into rebel-held territory. The capture of Debaltseve would put at risk thousands of government forces defending the town, while strengthening communication lines between the two rebel-held strongholds of Luhansk and Donetsk, say analysts. This in turn would make the goal of autonomy for the wider territory held by rebels in the east more viable. 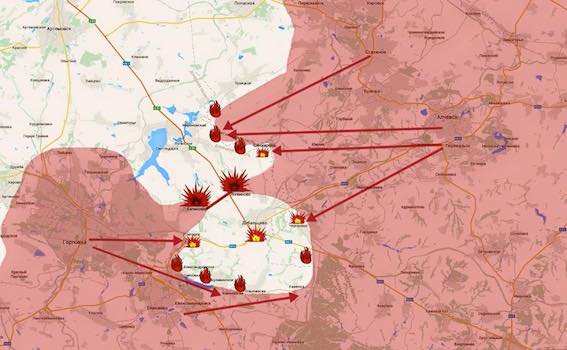 The reported gains came one day before the leaders of Russia, Ukraine, France and Germany are expected to come together in Minsk in Belarus for talks on re-establishing a ceasefire in the conflict zone.

Ukrainian frontline commentators confirmed the precarious position. “The Debaltseve salient is almost cut in two,” prominent journalist Yury Butusov wrote on Facebook. A large rebel force had captured a village on the main road west from the town, he added.

Eduard Basurin, spokesman for the Russian-backed, self-proclaimed Donetsk People's Republic, said earlier on February 9 that the insurgents had tightened their grip on Debaltseve.

Russian TV news showed what appeared to be a unit of fighters from the North Caucasus in Loginove, taking prisoners and firing weapons in the air in celebration of the capture of the settlement.

“The enemy showed high levels of professionalism, (…) they came in under cover of night using the fact that there was no moon,” a Ukrainian frontline soldier, Andriy Tsaplienko, wrote on Facebook.

"The enemy is trying to cut off the supply routes which are still under our control,” he added, but noting that the Ukrainian forces were also far from defeated despite the near encirclement. “In the region of Debaltseve there remain sufficient Ukrainian forces and fire power to destroy any enemy group attacking from the rear."

Kyiv denied that its forces in Debaltseve were surrounded. "Fighting is on to control the Artemivsk-Debaltseve motorway, where a military confrontation continues," Andriy Lysenko, a spokesman for Kyiv's so-called “anti-terrorist operation” said in the evening of February 9, Interfax reported. Lysenko added that there was no confirmation of the encirclement of Debaltseve.

Any final outcome of the fighting in the area will create a strong undercurrent as the leaders of Russia, Ukraine, France and Germany come together to talk about resurrecting last autumn's collapsed ceasfire agreement.

It was also not clear that the planned meeting would still go ahead. German Foreign Minister Frank-Walter Steinmeier said in Brussels on February 9 that there was still much work to be done on “open points” before the leaders met.