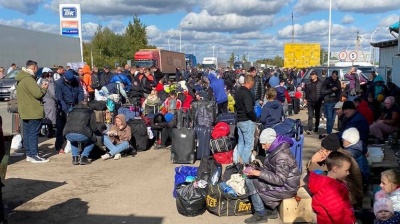 Thousands of Ukrainian refugees are trying to make their way into the EU through border crossings in the Pskov and Leningrad regions following Moscow's sham referenda in southeastern Ukraine and its announcement of a partial mobilisation.

Many residents of the newly annexed Ukrainian territories have been forced to flee to Europe through Russia for fear of being further caught up in the Kremlin’s war of aggression. As the BBC’s Russian service reports, the unprecedented number of refugees trying to flee into Europe has led to a collapse at Russia's borders with Estonia and Latvia.

Journalists and volunteers at the border crossings describe the situation as teetering on the brink of a humanitarian disaster. Thousands of people stuck in lines leading up to checkpoints sleep in open fields overnight in the cold, and sometimes even in the rain.

Russian authorities are reportedly dragging out the processing of border procedures, which is causing the massive build-up of cars and people. Many end up waiting in line for several days to cross through the Kunichina Gora border post with Estonia.

After the murder of Daria Dugina on August 30, when, as Moscow claims, an assassin from Ukraine travelled through Estonia, border controls were tightened, especially for Ukrainian citizens. There are reports of Ukrainians going through hours of verification procedures, where border officials collect fingerprints and search for pro-Ukrainian content on mobile phones.

Users on a public Telegram channel dedicated to providing information on the border checkpoints write that the speed of crossing into the EU depends on the work shifts of border officials. Users write that on some days 30 vehicles are allowed through, while on others the figure is only three.

Those travelling by vehicle can drive to nearby supermarkets and petrol stations for food, water and other items. Near the border checkpoint there are showers, but even here there are lines.

There are reports that an elderly woman died while waiting in line at the Kunichina Gora crossing. An ambulance was called to help the woman, who had allegedly lost consciousness. However, medics did not arrive in time to save her. The woman’s cause of death is still unknown.

Volunteers from the Pskov branch of the political party Yabloko have started bringing warm clothes and blankets, hot food and water to those who have been forced to wait in line for several days. The head of Yabloko’s Pskov branch, Lev Shlosberg, announced a donation drive on Facebook.

"Our volunteers are working at the border crossings, but their efforts are not enough to help everyone ... if you can help, send any amount to the humanitarian aid collection co-ordinator's card,” wrote Shlosberg.

Meanwhile, Estonian officials claim that Russia is loading up people waiting at the border and taking them away somewhere. Minister of the Interior Lauri Läänemets even suggested that Russia may be redirecting refugees to an undeveloped border area, as Belarus did along the Latvian and Lithuanian border last year.

"A thousand people is a lot already, but we're prepared," Läänemets said, while adding that if Russia directs people to cross the border illegally en masse, Estonia cannot presume that all of them are refugees from Ukraine.

After Vladimir Putin announced a partial mobilization of 300,000 soldiers on September 21, hundreds of thousands of men have fled Russia to avoid being sent to fight in Ukraine. In previous weeks, many fled to Georgia, Kazakhstan and Finland, where massive lines of vehicles and pedestrians formed at border crossings.

Citing sources in the Kremlin, Forbes reported that there have been around 700,000 registered border crossings leaving of Russia since the mobilisation began. However, it is difficult to say precisely what percentage of that number accounts for Russians fleeing mobilisation, as many are likely leaving for vacation or other reasons.

Earlier, the Baltic states, Poland and Finland closed their borders to Russian citizens with tourist visas.