Ukraine to construct a wall along its border with Belarus 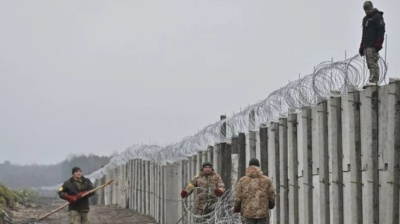 A picture of the border wall which Ukraine is constructing on its border with Belarus. / Kyrylo Tymoshenko/Telegram
By bne IntelliNews November 15, 2022

On Friday, November 11, the Deputy Head of the Office of the President of Ukraine, Kyrylo Tymoshenko, posted pictures of a wall that Ukraine is building along its border with Belarus on his Telegram channel.

According to Tymoshenko, 3 km of the border had already been built. Tymoshenko wrote: “We all want security and we are doing everything we can to prevent even a hypothetical enemy advance.”

Ukraine already began fortifying its border with Belarus in August, by blowing up bridges, mining certain areas as well as digging in along the border. Today, after almost three months, these new border fortifications will make a new invasion attempt from the Belarusian direction much harder for Russia than it was in February.

Tymoshenko added that fortifications were also being built along Ukraine’s northern border with Russia. However, while 3 km of the wall along the border with Belarus is finished, there are 1,083 km more to cover. Not an easy task to say the least, and in addition to being time-consuming it’s also expensive.

Ukraine is likely looking to finish as much of the border wall as possible until December/January, when the threat of a new invasion attempt from Belarus is expected to increase.

Belarus’ three neighbouring EU-countries decided to wall themselves off from Belarus after last year's migrant crisis on the Belarusian-EU border, which Western countries say was orchestrated by Belarusian strongman Alexander Lukashenko and his regime.

Like Poland, Ukraine is also constructing a physical wall, which is probably harder to get past. Lithuania, however, is still reporting cases of Belarusian border guards cutting up its fence and letting through migrants into Lithuania.

Unlike the EU countries, Ukraine’s wall is not being constructed to deter migrants, but rather Belarusian soldiers and possibly recon-teams. While Russia withdrew its forces from Ukraine’s northern front in spring, Ukraine has accused Russia of continuing to send recon teams across the border with Belarus.

Soon Belarus might find itself walled or fenced off from all of its neighbouring countries except Russia. While this of course has little effect on economic trade, it has a strong symbolic meaning. Lukashenko and his regime in Minsk have made Belarus so toxic to its neighbours that they need to physically shield themselves.

After Belarus brought down Ryanair Flight FR4978 to capture an opposition journalist and his girlfriend in May last year, Western countries (and Ukraine) closed off their airspace to Belarusian airplane carriers. Moreover, they told Western airlines not to fly over Belarusian airspace anymore. This drastically reduced Belarusians’ possibilities to chart a way out of the country.

During last year’s migrant crisis, many Belarusians also noted that the increased border security, and future border walls (which have now become reality) would make it harder for opposition-minded Belarusians to flee. In 2020 and 2021, many Belarusians fled the country by simply running through the woods into Ukraine, Poland, Lithuania or Latvia, but today this escape route has become much harder.

Several EU countries have made it harder for Belarusians to obtain visas since Russia began its full-scale invasion on February 24. Despite the fact that unlike many Russians the majority of Belarusians oppose the war, and as many oppose the regime, Belarusians have said that they’ve been treated badly abroad due to Belarus’ participation in the Russian invasion.

A sort of mental barrier has also been erected between Belarus and its neighbours, where Belarusians don’t feel wanted, and where they feel like nobody takes into account their opposition to the Minsk regime.

A barrier in the information space has also been in the making ever since 2020, although mostly by the Belarusian regime. Many Western new outlets have been declared “extremist” and prohibited from broadcasting or working in Belarus. Independent Belarusian media that’s been declared “extremist” have also often fled to neighbouring EU countries. Minsk accuses Poland and Lithuania of harbouring “terrorists”, “criminals” and “extremists”, which it wishes to prosecute for politically motivated crimes.

Last year, the European Broadcasting Union expelled Belarus’ state-owned tele-radio company BTRC. In September this year, Lithuania temporarily banned the “rebroadcasting and online distribution of radio, TV or individual broadcasts by entities established, directly or indirectly owned, controlled or financed by Russia and Belarus.” According to a Lithuania MP, this was done to safeguard the information space.

Thus there’s a mental, informational and now also physical barrier between Belarus and its neighbours. While the economic trade barrier caused by sanctions surely pushes Belarus closer to Russia, these other barriers will also push Belarus closer to its large eastern neighbour.

The victims will mostly be ordinary Belarusians. The winners will be the Kremlin, which gets to further integrate with Belarus in the economic sphere, the information space and also physically by continuing to increase travel and decrease border controls between the two countries. Finally, the ones who caused this divide to happen are, of course, none other than the officials in Minsk.