As US President Barack Obama arrived in Warsaw for his long-waited visit to Poland on June 3-4, another star was present: Petro Poroshenko, Ukraine’s president-elect, on his first visit abroad since his election two weeks ago. Both had come for the 25th anniversary of the first partially free elections of June 4, 1989, which paved the way to Poland’s peaceful transition from Communism, though Poroshenko's visit was about more than symbolism; Poland is Ukraine's biggest backer in the EU as the new Maidan government tries to wrest itself from Russia's grip.

During the events on Warsaw’s Castle Square, Ukraine kept coming up – complemented by the good show of Ukrainian flags in the crowd, along with a cluster of blue and yellow balloons and a young man with a Cossack-style haircut. “How can we allow the dark tactics of the 20th century to define this new century?” asked Obama in his speech on June 4, laden with references to Polish history. The last part focused directly on Ukraine, calling the Ukrainians of today the "heirs of Solidarity".

Poroshenko – who backed the Euromaidan protests in Kyiv – has already had his share of international exposure. The billionaire, sometimes referred to as Ukraine’s “Chocolate King” because of his Roshen confectionary empire, has 15 years’ experience in politics, including five months as foreign minister in 2009-10, and is fluent in English. But this was his first visit abroad since he won 55% of the vote in Ukraine’s president election at the end of May. Obama’s decision to meet him before he is formally sworn in as president points to the urgency of the situation, amid the unrest in eastern Ukraine and Russia’s role in it.

As soon as Poroshenko was elected on May 25, he said that first foreign trip might be to Poland. This went down well in Warsaw, which is hoping to build closer relations with a post-Yanukovych, pro-European Ukraine.

As Poland celebrates 25 years of freedom, Polish President Bronisław Komorowski reminded his compatriots and international guests that there can be no freedom without solidarity towards Ukraine. (Incidentally, the events on June 4 coincided with his 62nd birthday.) At their meeting the previous evening, the two heads of state discussed the situation in Ukraine and Polish support for the Ukrainian authorities’ reforms, in particular local government reform. They are to continue their talks on June 7, when Komorowski will be in Kyiv for Poroshenko’s inauguration. 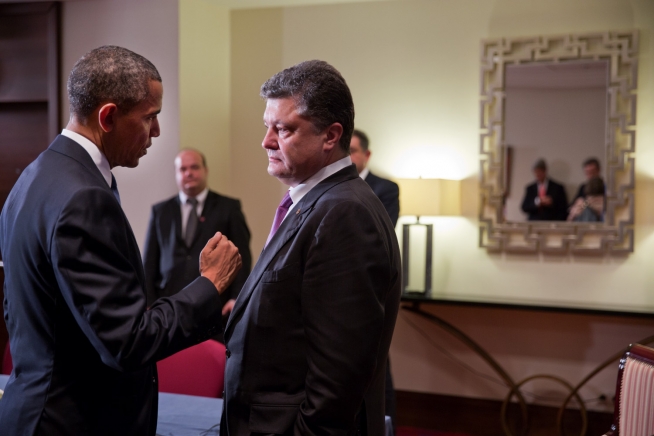 Yet the main focus was on the talks between Obama and Poroshenko early the following day. Ukrainians made a “wise selection” electing Poroshenko at this tough time, the US president said after their meeting. His warm words were backed up with the announcement of $5m worth of nonlethal equipment for Ukraine’s security forces. The previous day, he pledged $1bn to send more US military to Europe on a temporary basis. This follows recent calls by the Polish government for an increased US and Nato presence in Poland.

Poroshenko replied that he hopes that modernisation (including the reform of the energy sector), supported by “strong assistance” from the US, will help Ukraine receive an EU membership perspective “in the very near future”. During his visit to Warsaw, he also said that he is ready to sign the economic part of the EU-Ukraine association agreement straight after his inauguration. The political part was signed on March 21, with Prime Minister Arseniy Yatsenyuk representing Ukraine.

In a further sign of solidarity with Ukraine, Mustafa Dzhemilev, a leader of Crimea’s Tatar community and Soviet-era dissident, became the first recipient of the Polish government’s newly-created Solidarity Prize, named after the legendary trade union, at a ceremony at Warsaw’s Royal Castle on June 3. Now 70, Dzhemilev was six months old when he and his family were deported to Uzbekistan by the Soviet authorities in May 1944; he returned to Crimea in 1989. At the end of May, the Ukrainian media reported that he and Poroshenko are to discuss the “Ministry for Crimean Affairs” that the president-elect wants to set up. The special department would most probably be located in Kherson, in south-eastern Ukraine, Dzhemilev has said.

In a way, Poroshenko’s meetings in Warsaw were a warm-up ahead of the D-Day commemorations in Normandy on June 5, which will be attended by major European leaders – and, controversially, Russia’s Vladimir Putin. If Normandy marks the start of a peaceful process on Ukraine, it will be “very symbolic”, Poroshenko said after his meeting with Obama.