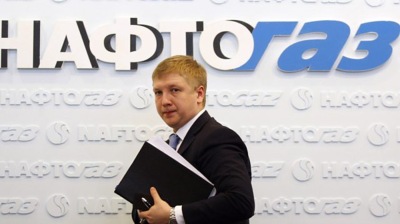 Ukraine’s government has dismissed the widely respected head of state-run oil and gas company Naftogaz, Andriy Kobolev, on April 29, the day after the company reported losing $684mn in 2020.

Kobolev is a controversial figure and caused scandals before such as paying himself large bonuses, which he justified with some cause for the transformation he has performed at the company, which has gone from a massive burden on the state to a profitable enterprise that is the single largest contributor to the state budget.

Naftogaz rejected the move, which it says is illegal and the Prime Minister does not have the power to execute.

“The decision adopted by the Cabinet of Ministers of Ukraine is a legal manipulation. The dismissal of the Supervisory Board for two days in order to make a decision on the dismissal of the chief executive officer is a violation of the basic principles of corporate governance of state-owned enterprises,” Naftogaz said in a statement emailed to bne IntelliNews. “According to the Charter of Naftogaz and the Law on Joint Stock Companies, submission of proposals to the general meeting for appointment or dismissal of the chief executive officer along with the relevant decision of the supervisory board is reserved to the supervisory board and cannot be delegated to the general meeting.”

Ukraine has been carrying out a very successful reform of its energy sector, including the unbundling of the gas production and transport functions that are managed by Naftogaz and GTSO respectively.

Kobolev played an active role in pushing through these changes as well as successfully suing Russia’s Gazprom for billions of dollar, although Vitrenko was the point on that campaign. Domestically, Kobolev was criticised for gradual increases in heating costs, at the behest of the International Monetary Fund (IMF).

The ousted CEO said on Facebook that he wasn’t aware of the dismissal and hadn’t stepped down.

It is not clear what the motives for the dismissal is. On the face of it the company’s losses last year could be the cause, but the coronacrisis and politics in the energy market explain much of that.

Others speculate the sacking is just the latest ouster of a leading reformer in government that started last year when Zelenskiy sacked the whole government and its technocratic ministers. Subsequently every high-profile reformer in the government has lost their job, including the governor of the National Bank of Ukraine (NBU).

“The way in which a range of decisions were made today regarding the governing bodies of Naftogaz demonstrates a reversion to the practice of manual control of state-owned enterprises,” Naftogaz said in its statement.

The company defended itself, saying that despite the losses it has maintained liquidity of UAH57bn and remains the biggest contributor to the budget.

“Yesterday, the company’s executive and supervisory boards presented the results of Naftogaz’s performance in 2020. Despite the crisis and the increase in counterparties’ debts due to loopholes created by state regulation, the company provided UAH141bn of revenues to the state budget in 2020, which accounts for 13% of the state revenues last year,” the company said.

The company went on to warn the decision to sack Kobolev would harm Ukraine’s investment image and damage its relations with the IMF, who have backed him and his reform efforts.

“Such actions of the Cabinet of Ministers are a signal to all state-owned enterprises: working in the interests of the budget and the people of Ukraine, and not in the interests of individual political forces, will be punished. In addition, it is a clear signal to investors in Ukrainian issuer securities: the working conditions of state-owned enterprises in Ukraine are unpredictable and may change depending on political expediency,” Naftogaz said.

Turkmenistan: The loneliness of the long-distance cyclist

Turkmenistan: The loneliness of the long-distance cyclist
Poland's PKN Orlen bulks up to play in the big league
bneGREEN: IEA calls for $1 trillion of annual investment into clean energy in developing economies

Hungary’s most powerful oligarch says he is just a lightning rod for attacks on Orban
4 hours ago
US sanctions on Russia’s OFZ local debt come into force
4 hours ago
Moscow back on lockdown as coronavirus infection rate surges again
11 hours ago
Lukashenko pushing illegal Iraqi refugees over the border into Lithuania
11 hours ago
Belarus is the “North Korea” of Europe, says US diplomat
3 days ago