Ukraine's economy is on his knees after 20 years of neglect and robbery, but there is one sector that is already flourishing and could be an engine of recovery.

"Ukraine has no rival in the world in terms of untapped agricultural potential," says Leonid Kozachenko, president of the Ukrainian Agrarian Confederation. Making use of only a third of its potential, the country is already a top-five grain producer and exporter in the world, and could triple its production with the right help.

Home to a quarter of the world's "black earth," the most fertile land on the planet, Ukraine has already seen several world-class agricultural companies emerge despite the dysfunctional nature of the economy and government. As farming is a low-margin, labour-intensive business, the sector was largely ignored by the incumbent oligarchs, who preferred to pick off the easy-to-steal metal plants and simple-to-run banks.

It is a testament to the fertility of the land that this year Ukraine is expecting to harvest a record crop and is already the third biggest grain exporter in the world, despite the civil war raging in the east and the political chaos caused by the revolution earlier in the year. Unlike other sectors, agriculture remains the bright spot of the Ukrainian economy, putting in a solid 6.3% year-on-year growth over the first eight months of 2014, according to a SigmaBleyzer report. The government says Ukraine had harvested 53.8mn tonnes of grain as of October 27, which was almost 15% higher than in the corresponding period last year. 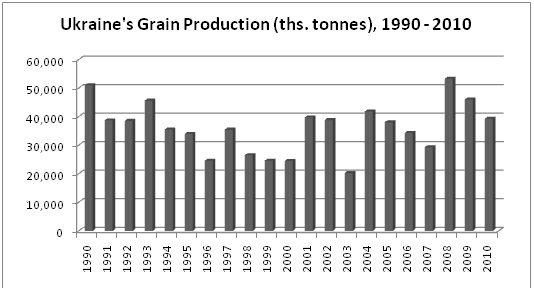 Ukraine’s total grain harvest this year is projected at about 60mn tonnes in 2014, on a par with last year’s record harvest. Although the harvest will not compensate for the sharp declines in tax revenues from heavy industry and other sectors, coupled with a steep reduction in imports it should help alleviate Ukraine’s budgetary problems. "If we can harness agriculture, then Ukraine will go from being an object in geopolitical games to a player," says Oleg Bakhmatyuk, chairman of UkrLand Farming, the largest agricultural concern in the country. "Together with the US, we could account for 60% of the worlds grain supplies in just a few years time, and then 80%."

Thanks to global population growth, the demand for food is expected to continually increase. Currently, Europe is self-sufficient in agricultural production, but that should change. With the global population expected to rise from the current 7bn to close to 12bn by the time our grandchildren are born, even Europe will go into deficit sometime in the next two decades, panellists at the SP Advisors’ investment conference in October speculated. Agricultural accounted for 9% of Ukraine’s GDP in 2013 and should do better this year, giving the government a welcome fillip from the relentless bad news.

Traditionally, Ukraine has been known as a steelmaker, but the metal sector is in decline. Moreover, many of the biggest and most productive steelmakers are in the war-torn eastern regions. Agriculture on the other hand has been much less affected and government policy is geared to promoting the sector, which is lightly taxed to encourage investment.

The chances of a quick turnaround are raised by the fact that agriculture is not a key sector in east Ukraine, though it remains important: Donetsk accounts for 27% of Ukraine's population and 38% of its food consumption. The ongoing conflict has hurt production, but not fatally. For example, egg producer Avangard has four farms in the east affected by the fighting – at one, all the chickens escaped – but the bulk of its production lies further west. "We had to take losses, but they are locked in now and we can continue our business," says Bakhmatyuk, whose UkrLand Farming owns Avangard. "[The east] is not a critical part of the country; losing control of Donbass is painful, but it is not fatal to the agricultural sector."

Living closer to the EU is obviously a good thing for Ukraine's farmers. However as bne reported, under the terms of the free trade and association deal signed this year with the EU access for Ukraine's agricultural products to EU markets is actually limited to begin with, in order to protect the EU's own agricultural production. "About 40% of the EU budget goes on farm subsidies, whereas only 1.8% of Ukraine's budget is spent this way. If we move closer to the EU, we will not only change the market, we will change fundamentally the way they work," predicts Leonid Kozachenko, president of the Ukrainian Agrarian Confederation.

The agricultural lobby in the EU is entrenched and it is very unlikely Ukraine will be allowed to even apply for EU candidate status in 2020, as Ukrainian President Petro Poroshenko promised in October. The black earth soils of Ukraine are capable of hurting the heavily subsidised Western European agricultural sector. "If we enter the European Union, we will change the model as it is not sustainable," says Kozachenko. "The agricultural lobby [in the West] has a blood-sucking instinct, whereas here agricultural could be the engine of growth."

While the task of reforming the country’s agriculture sector looks daunting, there is actually a lot of money about given the pressure on the global food supply from the rising population.

Kozachenko estimates some $145bn is invested in agriculture globally every year, including $10bn in Brazil. Ukraine could attract some $5bn-10bn of this money, reckons Kozachenko, as no one doubts its potential. But it remains a tall order, as the total FDI stock in Ukraine was $8.6bn at the end of 2013 and the country is unlikely to attract any serious investment this year.

Agriculture could provide the impetus for sweeping investment and reforms across the entire economy. Kozachenko says that putting more investment into leading agricultural companies is pointless unless it is accompanied by associated investment into the supporting infrastructure; adding 10mn tonnes of grain production would be useless unless there are sufficient trains and hoppers to transport that grain to the borders for export. "Ukraine is only using a third of its total agricultural potential. Total production today is worth some $20bn, but that could rise to $75bn very easily, which means $50bn a year of potential exports," says Kozachenko, citing a number that would grow the Ukrainian economy by just under a third and erase Ukraine's current account deficit, which stood at about $12bn in 2013, at a stroke.

One key change for the agricultural sector is to finally push ahead with land reform. Ukraine has some 20mn hectares of arable land, of which 10mn hectares belong to the government, which could be sold off. However, no one is expecting this to happen quickly; the privatisation of land remains one of the most politically charged issues that any country has to deal with. "If we can harness the potential of Ukraine's agricultural sector, the we will become an actor on the geopolitical stage rather than just a object," says Bakhmatyuk.