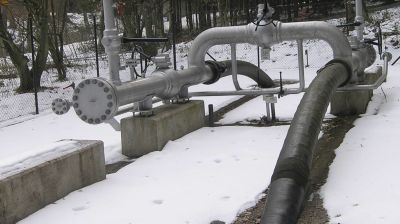 The West has granted credits for new natural gas supplies, after Kyiv stopped importing from Russia.
By bne IntelliNews September 19, 2016

Ukraine’s government on September 19 suddenly backtracked on a controversial decision to place the country's natural gas transportation company under the control of the energy ministry in Kyiv.

That decision, taken on September 7 and made public nine days later, drew a barrage of criticism that it would create a feeding trough out of the gas subsidiary for corrupt officials, especially in view of how it was plundered under the last government before 2014.

Kubiv’s U-turn is thought to have come after pressure from Ukraine’s Western creditors, which viewed the power grab as a violation of the conditions for granting credits for new natural gas supplies, after Kyiv stopped importing from Russia. Changing the control mechanism over Ukrtransgaz would have violated Ukraine’s agreement with the European Bank for Reconstruction and Development (EBRD), and jeopardised the lender's $300mn loan to Kyiv to buy gas ahead of the winter heating season.

“I am ready to admit, that in making the decision we did not undertake proper consultations – this is a technical, and in some respects, political moment. In connection with this, my decision as a minister [from Sept. 7] has been suspended,” Kubiv said in a statement.

But the government still eventually plans to unbundle Naftogaz into separate production, supply and transit companies in order to meet the country’s EU integration commitments, he added.

Although such separation is the broadly approved plan for Naftogaz, analysts said the timing of Kubiv’s move had likely disturbed Western creditors, coming immediately after the International Monetary Fund (IMF) decided to resume its stalled $17.5bn credit programme for Ukraine with a $1bn third tranche.

“Potentially it [the Ukrtransgaz decision] goes to the very heart of the key challenge now facing Ukraine – cleaning up the business environment, and making government and state owned entities open, transparent and accountable,” Nomura International strategist TimAsh wrote in a note on September 16 after Kubiv revealed the plan.

Ukrainian President Petro Poroshenko on the same day demanded renewed government action against corruption, prompting a skeptical response in view of the earlier plundering under ex-president Viktor Yanukovych. It is estimated that $3bn of Ukratransgaz profits were stolen between 2010-2013.

Naftogaz board chairman Andrew Kobolev told Hromadske TV that a transfer to the ministry now would see renewed large-scale thieving. “Now there is an attempt to go back to the time when Naftogaz was, in fact, the donor for all private, criminal and corrupt business, and it is our hope that the country’s leadership understands and draws the appropriate conclusions,” he said.

“The Ministry of Economy was well within its rights to do that, and there has been frustration over the slow pace in unbundling of Naftogaz enterprises, but there is concern as to how this was done,” Nomura's Ash commented.

With Ukrtransgaz controlling both the national gas pipeline network and the transit route that transports gas from Russia to Europe, the attempted transfer of control could have had several negative results for Ukraine. Since the EBRD’s credits are secured by Ukrtransgaz’s profits, the lender could revoke its credits, potentially bankrupting Naftogaz.

Premature transfer of control would likely lead to a resumption of corrupt schemes like Ukrtransgaz giving businesses of favoured oligarchs a super-low gas price, with these in turn being willing to pay kickbacks to Ukrtransgaz’s management and state officials. The company’s huge procurement and maintenance operations would also open up opportunities for corruption.

The decision also appeared before the Stockholm arbitration ruling for Ukraine in its case against Russia’s Gazprom, with a ruling possible in 2017. Ukraine has not directly bought any gas from its traditional supplier Russia since last December, instead importing gas from Europe. In 2015, Ukraine produced 19.9 bn cubic metres of gas and imported 16.5 bcm, including 10.3 bcm from the EU.