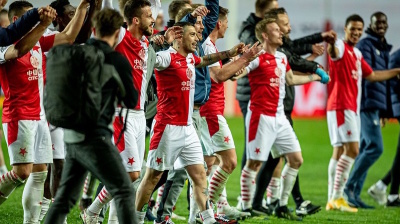 But it has also demonstrated the wide gulf that exists between attitudes towards racist behaviour in Western Europe compared to the newer member states in Central and Southeastern Europe. Racist chanting at Czech football games is still common, and rampant racist online abuse is shrugged off as 'free speech'.

The bans, announced by UEFA on April 15, follow a torrid Europa League game in Glasgow between Scottish champions Rangers and Czech champions Slavia on March 18, during which two Rangers players were sent off, and there was an altercation between Kudela and Glasgow Rangers player Glen Kamara on the pitch and in the tunnel afterwards. Slavia won 2-0 and progressed to the quarter finals, where they were knocked out by London's Arsenal on April 15.

In the key incident, Kudela approached Kamara and covered his mouth with his hand so he could not be lip read by the TV cameras. He admits swearing but denies calling Kamara a "fucking monkey". His words immediately caused outrage from the surrounding Rangers players and appear to have provoked Kamara to attack him in the tunnel after the game.

While Kudela was punished for allegedly making a racist insult to Kamara with a ban of 10 UEFA games, Kamara only received a three match ban for attacking Kudela in the tunnel. And his Rangers teammate Kemar Roofe was banned for just four matches after being given a red card for a a high-boot challenge on Slavia goalkeeper Ondrej Kolar, who ended with a fractured skull.

Czech politicians and media focussed on the fact that Kudela denied the offence, and that UEFA punished him far more severely than the violent Rangers players.

"Next time, don't whisper anything into his ear but just punch him right away, for four games," said the controversial mayor of Reporyje Pavel Novotny (from the rightwing Civic Democrats) about the logic of UEFA's decision.

“Verdicts like the one today make people racists. Fractured skull: 4 games, attack a rival with fists: 3 games. Alleged racist insult: 10 games. UEFA should think better of it. Due to such decisions, brownish [fascist] parties are thriving in Europe,” said Pirate MP Mikulas Ferjencik.

“I have not yet commented on [the match of] Slavia in Glasgow. I wasn't there, I only saw it on TV. But today's UEFA verdict on Kudela is insane. Convicted without evidence....They really went crazy in the West,” said MEP Alexandr Vondra (Civic Democrats), a former foreign minister.

“An obvious disparity which does not make sense in a standard environment of freedom. But at the time of the onset of the new progressive totalitarianism, nothing surprising. The word is considered by the new totalitarianism to be a crime. Cardinal, hereditary and unforgivable,” commented populist Czech President Milos Zeman's spokesperson Jiri Ovcacek.

The Head of Zeman´s Office, Vratislav Mynar, even decided to send an open letter to UEFA, condemning all imposed punishments, unless evidence is proven.

“I would like to note that racism is unproven and alleged. Even the UEFA inspector himself questioned Ondrej Kudela´s racist statement. Nevertheless, you have decided to place a completely unprecedented punishment for a player who did not harm anyone and then only verbally, according to his statement, offended his opponent. You condemn a decent person without a single piece of evidence. You make it impossible for sportsmen to fulfill their dream in the European League,” he wrote.

“All this just to fulfill the perverted expectations of a small group of activists and a club unable to win on the field, all the more so by shouting empty and hurtful phrases about racism,” he added.

According to Mynar, UEFA´s fight against racism has become the fight of the unsuccessful against the successful, the pinnacle of hypocrisy and positive discrimination.

“Your efforts can lead to the opposite, a situation where a person with a colour other than black will be discriminated against, oppressed and deprived of his rights. That is why I also consider it necessary to oppose this procedure,” Mynar stressed.

Slavia responded to UEFA´s verdict by saying that it respects its decision, admitting that Kudela should not have approached the opposition player, which immediately triggered hard criticism from Slavia´s fans.

“I deeply regret that and apologise to Glen Kamara for a situation that has clearly caused distress to him and his teammates, as well as everyone associated with Slavia and Rangers. I am taking positive steps to prevent such a situation from happening in our club ever again,” said Slavia Chairman of the Board Jaroslav Tvrdik.

"He can't be serious. You threw Ondra overboard," wrote David Fajkus, a member of Slavia´s Fanclub. "I understand, you can't win against a crime-ridden organization. But most fans expect a gesture of support," added another fan Frantisek Koudelka on Twitter.

“I am responsible for the club, whose 85% of the budget comes from UEFA and the Premier League. We have submitted over 50 pages by the [lawyers], the verdict has been issued, it's over. The club has nowhere to appeal. We pay for Ondrej´s legal team, no one threw him overboard and he does not think so. We have to go forward,” Tvrdik

The former Czech Radio correspondent in the UK and current sports commentator for SeznamZpravy, Jiri Hosek, explained that coverage of the accident was very different in the UK and at home in Czechia. “One big difference, which is hugely disappointing to me as far as the British media is concerned, was that the lack of respect shown by Glasgow Rangers players, the way they behaved on the pitch, was completely ignored, with the focus just being put on the alleged racist incident on the pitch.”

Hosek noted that while the ´Black Lives Matter´ movement resonated strongly in the UK, it touched Czechia only marginally. That's why the Czech media focused mainly on the toxic atmosphere of the match,  he said.

Hosek stressed that Czech society and the Czech media insist on a presumption of innocence, while the approach in the United Kingdom toward racism is that a claim of victim of racist abuse is generally taken as true and the alleged perpetrator has to prove his innocence. He also pointed out that the 10-match ban was the minimum for this kind of offence and had been criticised as lenient in the UK.

ING: So what is a greenium and how do we get to it?
Merger between Moneta Money Bank and Air Bank in trouble after proxy firms come out against
COMMENT: Time to end Putin's impunity

Moscow back on lockdown as coronavirus infection rate surges again
7 hours ago
Lukashenko pushing illegal Iraqi refugees over the border into Lithuania
7 hours ago
Belarus is the “North Korea” of Europe, says US diplomat
2 days ago
European commissioner confirms €30bn EU investment plan for Western Balkans
3 days ago
Merger between Moneta Money Bank and Air Bank in trouble after proxy firms come out against
3 days ago